Gastro geeks everywhere will have noticed the recent trend towards a more relaxed, casual approach to dining. Escoffier may well be turning in his grave at the thought of Jason Atherton’s Pollen Street Social in London, or the speakeasy-style eateries of today’s Manhattan. No starched linens, no trolley service, no waiters in tails. A restaurant is no longer a formal beacon of good cuisine. It is a meeting place. A co-opted office. A concept: eat, yes – but socialise too.

Social House, darling of cool-kid restaurant group Ismaya, is Indonesia’s answer to the social-eating scene. A hipster joint like this wouldn’t be caught dead in a mall in New York, but this is Asia, so the east wing of Grand Indonesia is a fitting location. Trekking your way through the shops makes for a slightly less-than-glamourous entrance, but once in you are rewarded with an open and welcoming space. The pale wooden décor is offset by trees and bits of shrubbery bedecked with fairy lights. In true social style, the space is sectioned into functional areas: there are private rooms, a bar, a raised dining area and even a wine shop (with decent choice and average prices).

As all civilised socialising should, we began in the bar. There is an extensive list of particularly imaginative, if not always tempting, cocktails. I always think anyone who needs to dress their alcohol up as dessert (vodka crème brûlée, anyone?) doesn’t actually like drinking, and therefore probably shouldn’t. The wines by the glass, though lopsided with four reds and two whites, were reasonable quality and adequately priced. But since they have a wine shop, they could afford to add a few more whites to the list at least. We sampled a classic Californian, Robert Mondavi’s Woodbridge Cabernet Sauvignon at Rp.104,000, which was very agreeable, and through the course of dinner, both whites on the list, Alexis Lichine Sauvignon Blanc (Rp.85,000) and Domaine Chandon Chardonnay (Rp.144,000), which were fine. 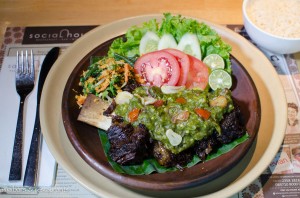 Moving into the buzzing dining area, we saw almost every table was full, largely of groups of friends, chatting, laughing and generally making merry. So far, so social. If the mission here is to simply provide a place for the Jakaterati to have a moderate amount of chilled fun in funky surroundings – job done. But to truly emulate Atherton and co.’s Michelin-starred international social-dining successes, this place will need to impress with more than just atmosphere. The quality of the food, and the service, are key.

Alas dear readers, therein lies the rub. Because unfortunately Social House couldn’t help itself. Like a kid in a sweet shop, it just had to go for that all-encompassing catch-all of a menu, ‘international’, or as I like to call it, ‘indecisive’. Here, the food concept ranges from sushi, sashimi, noodles, fajitas, pizzas and pastas to the ubiquitous steak.

Restaurateurs of Indonesia: why, why, why, must we try to please everyone? You know as well as I do it’s impossible anyway. Yes, you’re located in a mall with a great variety of taste buds with fat wallets walking around in it. But that doesn’t mean you can successfully cater to them all.

Have conviction in your cooking and in your diners’ tastes, pick what you’re good at, and leave globe-trotting gastronomy to the hotel buffets.

Still. If you can’t beat ‘em, join ‘em. So we did – and in part, we were pleasantly surprised.

To whet our whistles on this international gourmet-gallop, we started with ‘small plates’ from a couple of culinary canons. First up, crispy roti prata with thick seafood curry dip (Rp.69,000) was both an original idea and, frankly, quite moreish. The ‘dip’ was a medium-spiced, rich Malaysian sauce perfect for scooping up with that flaky, pastry-like bread. Successful.

Alongside this was a tuna maguro tataki with crispy garlic and ponzu sauce at Rp.75,000. The portions are not large, but the fish was convincingly fresh (though of course, not that spankingly, just-off-the-boat fresh you get in Japan), and the ponzu was tasty enough. 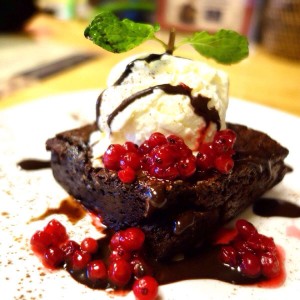 Finally, ‘fresh’ spring rolls with shrimp, chicken, egg and vegetables (Rp.69,000) were a little boring and under-loved. It just goes to show that trying to do too many cuisines under one roof is eventually going to produce some losers.

For something more substantial, we split the Wagyu beef burger with Brie, Emmental, eggplant, rocket, sundried tomato, Social House special sauce and fries. The burger patty itself was actually juicy, though the onion rings could have been crispier. Overall this was not a disappointment at Rp.165,000.

What was a let-down was the service. Disorganised, forgetful, and just a bit too casual (even for the social-dining concept), overall the team came off as essentially inept, albeit friendly. Like lots of places in Jakarta now, their hiring policy is evidently based on the coolness of your haircut rather than any sort of ability to get the job done.

I don’t need to restate that I prefer my steak without a side of sushi. But since nothing will change the sheer breadth of this menu’s dithering, we’ll put that issue aside, because Social House does have its good points. Yes, there are improvements to be made in the kitchen, and most certainly to the service, but all in all, I admit I would go back – most likely with a group of friends, and an emphasis on conversation rather than consumption. After all, even I have been known to socialise.

Spot a Kinder Joy for sale? Report to Halo BPOM