The idea you can travel seamlessly from Singapore to Hong Kong by train remains a distant dream, at least until Cambodia can get its lines up and running after decades of neglect. But certainly much of the journey can be done by the intrepid. The journey begins of course in Singapore, but no longer from the historic railway station. In the glorious name of progress, that sees so much of our heritage ripped away from us, Singapore’s terminal is at Woodlands, far closer to the border.

A short chug across the Causeway and you are soon in Johor Bahru in a new country at the southernmost tip of the Asian mainland. Unless rubber plantations or vast swathes of palm oil trees are your thing, the first few hours of the journey north are likely to be unexciting beyond the soothing rattle of the wheels over the rails. The vista remains unchanging except for the occasional station.

At Gemas the line divides. To the West lies Kuala Lumpur and Penang, centre of business and industry, but far less pleasing on the eye than the jungle clad interior that is the backdrop to the North Eastern line. Kuala Lipis epitomizes rural Malaysia. Once considered as the capital of the country it sits comfortably in the middle, not far from the immense Taman Negara. But Lipis boasts other charms. It has a languid, carefree nature where time runs slowly, if at all.

The railway station is hemmed in by crumbling shop houses, shuttered and blinded against the mid day sun while further afield colonial, stilted bungalows recall a time when the British ruled the roost in these parts. Indeed the area around Kuala Lipis saw plenty of action during the ‘Emergency’ when communist insurgents tried their best to fly the red flag that was so popular in the 1950s and 1960s over the country.

It’s a long, slow journey north but after a couple of days in Kuala Lipis, this should come as no surprise. This is not the west coast where progress is measured by high rise and traffic jams. Here in the heart of Malaysia is the Malaya of myth. This is the Malaya of literature like Soul of Malaya by Henri Fauconnier, a timeless place filled with dreams and birdsong where crickets, frogs and geckos fill the cool evening air as the tuan sits on the verandah enjoying the first stengahs of the day.

The train pretty much resembles the market communities it serves, as traders board and alight, carrying their fruit and vegetables.

Entering the state of Kelantan and you break the jungle. Evidence of deforestation is all around as you rattle through stations like Gua Musang and Tanah Merah. The final stop is Tumpat and although the line does carry on to Thailand, it hasn’t been used for decades. The state capital of Kota Bahru is a short taxi ride away and worth a couple of days exploring. As the Japanese were bombing Pearl Harbour, they were simultaneously landing on the beaches just off KB, beginning the headlong rush down the peninsula that saw the British humiliated in a few short weeks.

The landing beach, crisscrossed by creeks and within spitting distance of the airport, still boasts pillboxes that proved futile in face of the onslaught. 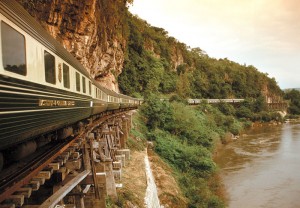 It is possible to reach the border by bus from KB which stops on the Malaysian side. The walk across is painless, if hot, and there are motor cycle taxis waiting on the other side to take people to heart of the Thai town of Sungei Golok. An unassuming town, it is hard to see how Sungei Golok could be so appealing to the Malaysian hordes who cross the border daily until you remember that Kelantan is a conservative state where alcohol and other hedonistic delights remain hard to find. Thailand on the other hand, despite the Muslim majority in its southern provinces, has no problem filling that void so the town here is filled with hairdressing salons where hair cuts are just one item on the menu and coffee shops where coffee is an afterthought.

The provinces of Narathiwat, Yala and Pattani are in the heart of the multi-faceted southern insurgency that has claimed thousands of lives in the last decade or, so though they tend to occur in the more rural areas. Part nationalist, part religious and part gangster motivated it is a slaying that shows no sign of easing up as the Thai government struggles to keep a lid on the many factions involved.

The train takes you through all of that!

Hat Yai is the first city in the South. Intriguingly it translates as ‘Big Beach’ although very much an inland city, and is the sort of town Indonesians would love; filled with malls and traditional markets. Indeed the airport frequently handles flights from Malaysia and Singapore for visitors keen to shop and, being Thailand, there is also that nightlife that carries on alongside the malls.

For those with no interest in shopping or the other stuff, there is actually nothing of any appeal in the place except a side trip to Songkla for history and beach buffs.

The train from Hat Yai heads north to Bangkok – a long but comfortable 16 to 18 hour trek along the country’s narrow spine. Alternatively, another line heads southwest back to Malaysia, crossing the border at Padang Besar and touching down at places like Butterworth, with ferry connections to the island of Penang, the historic city of Taiping, the karst formations of Ipoh and of course the capital city Kuala Lumpur with its eye catching Moghul themed railway station.

A six hour run south takes you back to Singapore and thoughts of home!