Words and photos by Angela Richardson

The province of DKI Jakarta (Daerah Khusus Ibukota, not including Bogor, Tangerang, Depok and Bekasi) has a population of over 9.6 million (2010), each individual of which produces waste. Shockingly for a city of its size, there is no solid waste management plan in place, and recycling is left in the hands of a few non-governmental organizations and the pemulung, who work hard to sort through millions of people’s mixed rubbish before it’s taken to a landfill. An estimated 6,000 tonnes of rubbish is produced a day in Jakarta, 2,000 of which is thought to end up in the rivers, causing flooding and diseases. 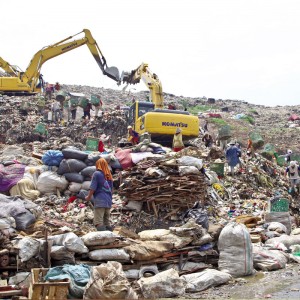 Rubbish collected in the province of DKI Jakarta all ends up at the largest landfill of Indonesia – Bantar Gebang. This massive 111-hectare rubbish tip is more than meets the eye, as it homes 5,000 inhabitants who live and work here as scavengers, including a pre-school and a primary school, where the children of the scavengers come to get an education.

The first thing you notice when getting close to Bantar Gebang is the smell. It is a stench like no other, and the closer you get to the mountain of rubbish, the stronger it stings your nostrils and the back of your throat. It is a smell I will never forget. Driving into the vicinity, you are met with a shanty town built right on top of and amongst the rubbish and flies number in the thousands.

Arriving at the primary school on Bantar Gebang, Yayasan Dinamika Indonesia, we are greeted by children running around, playing and screaming on their morning break. It’s like arriving at any other school, except this school is surrounded by rubbish, and the odd pemulung rummages through trash left in the shrubs on the school grounds as the kids play. Here we meet Nasrudin, Head of YDI, who explains the story of his school to us, which has been in operation since 1996.

“There are 362 children at this primary school and 52 at the pre-school down the road,” Nasrudin tells us. “We have an open door policy with flexible rules to try and keep children in class. We will even let them sleep if they need to.” Nasrudin has been at YDI since it opened and knows more about the children of Bantar Gebang than anyone else. 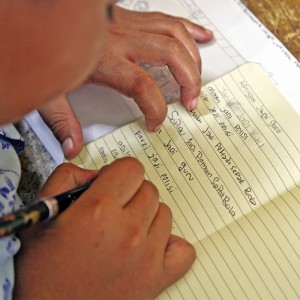 After visiting the classrooms, it is interesting to see that these children are quite introvert, not like street children, who are oftentimes boisterous. The children of Bantar Gebang are well-behaved and many have dreams of becoming something other than a scavenger. Many of the children I spoke to wanted to be a teacher, a policeman or even a football player. The sad reality is that most end up working on the landfill or in factories nearby.

“Once the children know how to read and write, they often want to leave and start earning money for themselves doing what their parents do,” Nasrudin explains. “90% of the crane drivers on the landfill are YDI alumni and we also have many grandchildren of alumni attending.” This truth becomes evident when looking at how the number of students goes down as the grade number goes up: Grade 1 (69 students), Grade 2 (79 students), Grade 3 (54 students), Grade 4 (59 students), Grade 5 (41 students) and Grade 6 (27 students).

Pemulung who live and work on Bantar Gebang predominantly come from Indramayu in Cirebon, with a minority from Madura and Karawang. The pemulung mostly work directly for the pengepul, someone who acts as a middle man and buys the rubbish from them at a cheap price, selling onto their bosses, who then send the recyclable items on to recycling factories. There is a monopoly system at play here, whereby the pengepul give the pemulung loans in order to keep them under their thumbs, forever indebted to them. On this landfill, the pemulung work five days a week, wading through mountains of mixed waste in search of recyclable items, with two days left to sort through what they’ve collected, earning between Rp.150,000 to Rp.200,000 a week. The children usually help with the cutting up of plastic and sorting of collected rubbish after school hours.

“Many of the children have skin irritations, and they all have cacingan (worms),” Nasrudin tells me. Anemia is also another common illness these children face, although surprisingly, the number of dengue fever cases is very rare and there have been no reported cases of tuberculosis. Living on a landfill is extremely unsanitary and dangerous, and four pemulung lost their lives recently to a landslide of rubbish. When touring the landfill, I was saddened to see men, women and children working in such terrible conditions, completely oblivious to the foul smell or rotting garbage they have become accustomed to. “The children find it hard to make it into state schools after they leave us,” Nasrudin says. “There is a certain stigma which is attached to children of Bantar Gebang.” It is wonderful to hear from Nasrudin that a few of his students have gone on to working at big companies such as Panasonic after completing a university degree, thanks to Yayasan Dinamika Indonesia. Oman, one of the alumni of YDI, even came back after studying Mathematics at STKIP Kusumanegara, to teach the children at a place which gave him hope for the future.

YDI now receives financial support from the government under Biaya Operasi Sekolah, which helps to pay for their operational costs, however they are currently looking for sponsors to help pay for teacher’s fees, as the funds they receive do not cover this. If you are interested to sponsor this extraordinary school, or volunteer your time to teach English or Mathematics to the children of the pemulung, please contact Nasrudin at +62 (0)8129848401.