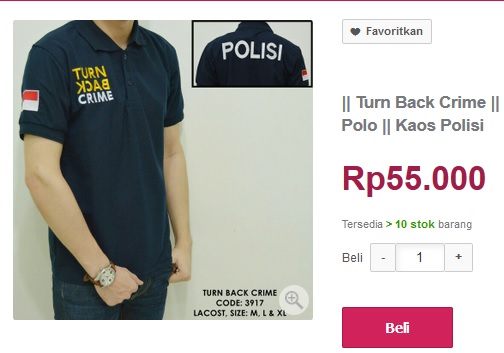 Indonesian police are seeking to improve their image by wearing navy blue shirts emblazoned with the slogan Turn Back Crime. Criminals are donning the same apparel to commit theft and extortion.

The Indonesian Police uniform, which started out as khaki in the 1940s and morphed into shades of brown by the 1970s, is unlikely to win any fashion awards. Nor should it. Provided that police are professional, their style of apparel is unimportant.

But since late 2015, police have been cultivating a cooler look. When Jakarta Police confronted terrorists near the Sarinah shopping centre in January 2016, there was a new type of police outfit on show: navy blue polo shirts featuring the Turn Back Crime slogan, cargo pants and sports shoes.

Turn Back Crime is not a locally devised motto. It’s the name of a campaign launched by the International Criminal Police Organization (Interpol) in June 2014 to raise awareness of transnational criminal networks, especially those involved in cybercrime, fake goods and fake medicine.

The slogan was subsequently adopted by the director-general of the Jakarta Police’s criminal investigation unit, Senior Commissioner Krishna Murti. He believes the fashionable blue shirts can improve the image, character and authority of the police.

He said police receive daily media exposure, so they should look good in order to make the public feel proud of them. Krishna is active on social media, where he recently posed in a friendly manner alongside a man accused of the murder and mutilation of a pregnant woman. Krishna deleted the photo from his Instagram account after criticism.

The National Police has consistently been ranked among the country’s most corrupt institutions. Critics say bribery is common, whether paying for a traffic infringement, a theft report or even a job on the force. Neta S. Pane, the head of an anti-corruption group called Indonesia Police Watch, says it can cost up to Rp.100 million to join the Jakarta Police.

Members of the public wishing to look as cool as police can purchase Turn Back Crime shirts, jackets, hats and even children’s garments from numerous markets, with prices ranging from Rp.30,000 to Rp.250,000. Police uniforms and accessories can also be purchased from Senen Market in Central Jakarta.

Rino Saputra (24), a resident of Lampung province in Sumatra, bought a ‘Turn Back Crime’ shirt and posed as a member of the Mobile Brigade (Brimob) Police. He drove around the provincial capital Bandar Lampung, looking for children driving motorbikes – not hard to find in Indonesia.

He would stop the minors and ask them to produce their license and registration. When they were unable to do so, he would ‘confiscate’ their bikes.

He stole at least three bikes before being arrested in May. He said he was just “playing around”, but police did not take kindly to the impostor and shot him in the left leg, apparently to prevent him from escaping. Rino could face seven years in jail for theft.

Anton Chandra (27) posed as a policeman in order to have sex with more than a dozen prostitutes living in the Kalibata City apartments in Pancoran, South Jakarta.

He started out with a regular police shirt purchased from Senen Market, before buying a more stylish Turn Back Crime shirt for Rp.100,000. On Facebook, he befriended prostitutes and invited them to meet, whereupon he offered protection from arrest if they would sleep with him. He claimed to be a superintendent in the narcotics division.

Anton’s downfall came when he started stealing from the women. On April 10, after finishing a liaison with one woman at Kalibata City, he gave her an ATM card and asked her to purchase some goods for him at the local Indomaret convenience store. He persuaded her to leave her handbag and phone with him. When the woman tried to pay, she discovered the ATM card was invalid. When she exited the store, Anton had disappeared along with her bag.

Suspecting that a real police officer would not resort to such underhand theft, the woman contacted some of the other victims. Together, they went to police. Anton was later arrested at his house in Pasar Minggu. Police said he had been routinely conning at least 13 women. He is charged with fraud and embezzlement.

Who hasn’t fantasized about being an Indonesian traffic cop in order to punish errant drivers, especially reckless bus drivers?

Angga Ardian Ola (21), who works as a driver for a ride-hailing application, was driving his Honda Mobilio in steady traffic on Jakarta’s Jalan Gatot Subroto on a Wednesday night in May when a MetroMini bus suddenly cut in front of him. Infuriated, Angga raced ahead of the bus and then stopped sideways in front of it, forcing it to stop, just outside Medistra Hospital.

Wearing his Turn Back Crime shirt, he got out and challenged the bus driver to a fight. “Don’t you know who I am?” he shouted. Afraid that Angga was a policeman, the driver refused to fight. Angga then took out a tyre iron and smashed the bus’ windscreen and side mirrors, before driving away.

The following day, police tracked down Angga at his house in Pancoran Barat in South Jakarta. The bus driver opted not to press charges after Angga agreed to pay compensation of Rp.950,000 for the damage.

Cable Guy
In a disturbing video (http://bit.ly/29nrBtC) uploaded to YouTube, a corpulent thug in prescription sunglasses and a Turn Back Crime jacket threatens to get violent if some workers continue to install fibre optic cable in a Jakarta street without paying him.

The thug initially claims to be from Pemuda Pancasila, then from the Betawi Communications Forum (Forkabi) – both of them notorious for alleged protection rackets.
Driving Licenses

In the West Java towns of Ciamis and Tasikmalaya, a 34-year-old man wore a Turn Back Crime shirt and pretended to be a brigadier. He visited shopping centres and public places, offering to provide driving licenses for Rp.100,000 each. His victims included sales promotion girls and at least one Muslim cleric, all of whom thought it was fine to pay a bribe for a license without undergoing requisite testing.

Starting in mid-May, the man had accumulated at least 40 orders by the time he was arrested in June. He said he had been obsessed with becoming a policeman since he was a boy, but he was rejected when he tried to join the force in 1998.

His Turn Back Crime shirt, which he purchased for Rp.30,000, gave him a brief chance to live his dream of becoming a corrupt policeman.

In Sukabumi, West Java, Erwin Surya Priyadi (44) posed as an official of the police’s Basic Officer Training College. He convinced more than 20 people to pay bribes in return for admission to the college.

He conducted this scam for a year, telling people they should pay Rp.100 million to become non-commissioned officers. Despite a slew of complaints, he was not arrested until May.

Victims who were unable to pay the Rp.100 million up front were able to pay deposits ranging from Rp.4 million to Rp.20 million. Some were also asked to provide ‘gifts’ in the form of motorbikes and smartphones. They started to complain when they were never admitted to the college.

Rather than just rely on a police shirt, Erwin completed his look by carrying a toy gun in a holster. He also had a police ID card, which he had purchased from a police cooperative.

In late May, there were reports that members of the public could face three months in jail if they wore Turn Back Crime shirts.

National Police chief General Badrodin Haiti and Jakarta Police spokesman Awi Setiyono hurried to clarify that people were free to wear the clothing, provided they did not commit any crimes.

Badrodin said the popularity of Turn Back Crime clothing was a positive development, as it serves as a reminder to the public that crime must be eradicated.

If a police uniform inspires mistrust and fear of extortion, then it’s time to make changes beyond mere uniforms. Professionalism is paramount.