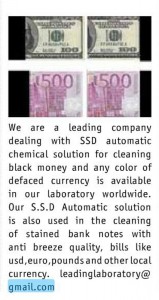 It is almost a year since I wrote my first Scams column for Jakarta Expat and there is no shortage of material for future columns. Yet like a stale TV sitcom that lazily cobbles together old clips to make a ‘new’ episode, it’s time to look back at a classic scam.

Specifically, the very first scam I wrote about: black money. This is partly because it remains prevalent, but mostly because the previous edition of this magazine carried an embarrassing advertisement for the swindle.

The ad stated: “We are a leading company dealing with SSD automatic chemical solution for cleaning black money and any colour of defaced currency is available in our laboratory worldwide.”

I emailed the villain who placed the ad, claiming I needed his literal money laundering service. I was informed that one litre of the chemical would cost $14,500, and that a supplier from the US would be sent to Jakarta within a day. I haven’t yet decided whether to ask him to meet me inside an upscale brothel or a flooded slum.

Sadly, the scammer will now be using the printed advertisement to lend credence to his sales pitch, which will go something like this: “I have $1 million that was dyed black to avoid detection by Customs, but I can’t get the dye off the banknotes. Then I saw this ad in Jakarta Expat for a special chemical to clean the money. If you can pay for enough of the chemical, I will split the million dollars with you!”

A conman recently tried to pull this scam on a friend of mine at Sarinah shopping centre. She said the foreign man was impeccably dressed and charming, and wanted Rp.15 million – or more if she could afford it – to buy the chemical to clean dollars that had been dyed black. 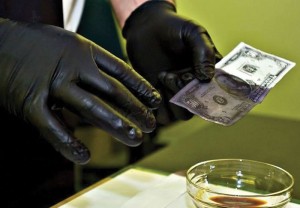 The dye on the ‘money’ is nothing more than iodine, while the cleaning chemical is vitamin c dissolved in water, and the black money is worthless paper.

Fake advertising to lure people into scams is nothing new. In Australia, England and the US, a phony ad is printed to support a swindle called the White Van Speaker Scam. I almost fell victim to this scam many years ago. I was in an Australian supermarket carpark when a white van pulled up alongside my car. Two men in the van asked if I wanted to buy some cheap speakers. They claimed to be professional installers of state-of-the-art sound systems. Dispatch workers had “accidentally loaded an additional unit” into their van that morning and they wanted to dispose of it at a low price.

“This isn’t a scam or nothing,” the van driver insisted. I inspected the goods on offer and didn’t recognise the brand name. The conmen claimed this speaker set would usually retail for over $3,000, but they would sell it to me for only $700.

When I expressed doubt over the original price, they showed me a $3,500 sticker on the box. I told them anyone could print a fake sticker. This prompted them to play their trump card; a magazine on high-fi equipment, containing a full-page advertisement for this very product priced at $3,499.

I still balked at the price, as I didn’t carry $700 for a supermarket trip. “You can drive to an ATM and get the money, and we’ll follow you,” said the driver. I was still not convinced. Sensing my hesitation, they reduced the price to $500. I haggled a bit more and got them down to $300. That was good enough for me. I drove to the ATM and withdrew the money.

“Because we’re giving it to you for such a low price, you owe us a case of beer, hey?” the driver said affably. I had no desire to buy even a single can of beer for these guys. Before handing over my cash, I asked to see the specifications and the goods once more. I was too ignorant to know a woofer from a tweeter, but I knew something was wrong. As they loaded the speakers into the trunk of my car, I apologised and said the deal didn’t feel right. They took back their near worthless sound system and drove off in search of another sucker.

I’m yet to hear of the white van speaker scam reaching Jakarta, probably because sound systems here are already cheap. Instead, Indonesia has a host of other scams. I hope the media will give them only negative publicity.