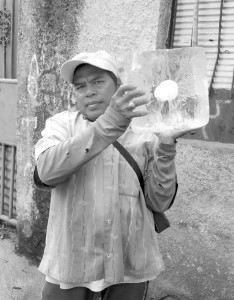 With Ramadhan in full swing you’d think that Husin’s business, selling ice to the 30 or more vendors and food stalls along Gang Perintis, behind Mega Kuningan, would have taken a hit. But the Holy Month, Husin explains with a smile, actually has little impact on the ice business. That sweltering summer heat keeps the ice market hot.

Husin has been in the ice game so long that when asked when he got his start, his eyes focus, ebb and then flow up and to the right where he tries to recall the exact year he started before settling on, “A long time ago.”

When the 45-year-old Madura native explains how he manages his day-to-day, the parable of the Mexican Fisherman comes to mind. It’s easy to question why Husin, who opens for business at 4.30am and is home by 2pm to meet his wife, doesn’t stay open later, sell more ice and make more money. But Husin seems content. Like the fisherman in the famous parable, he likes to head home early. He lives a full and busy life.

A spot in the shade and a chance to chit-chat all day with good friends, laughing and joking. Husin doesn’t seem interested in introducing the idea of stress just for a bit more cash. Husin has it made in the side. He opens shop early, meeting a truck from Kebayoran before the sun comes up, and after unloading his ice, waits patiently while other smaller vendors come and lop off chucks of the cool reprise for anywhere between Rp.20,000 and Rp.40,000. When the ice is gone, Husin hops on his bike and heads home. He usually grabs a shower and spends a few minutes in front of the TV before his wife gets home from the Padang stall. They couldn’t be happier. 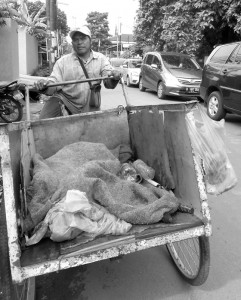 Meanwhile, the question on everyone’s mind, as they pass by Husin’s ice buried under tarps and blankets for nine hours a day, is how does the ice stay clean? With cars and motorbikes passing by the blocks all day long, the pollution and dirt must seep into the ice. Most people would never drink the ice that ends up in the glasses of tea and other drinks ordered at wartegs across the city. Fear of typhoid and other waterborne diseases leave most people convinced to stay far away from places that sell ice bought from vendors like Husin.

But Husin promises that all of Jakarta can rest assured that his ice will do nothing to your digestive track, and won’t leave you retching and running for the bathroom if you happen to get a few cubes in your glass.

In fact, when asked about typhoid and dysentery, Husin shook his head and pursed his lips. “This is a busy road,” he says peering down at a handheld mirror before calmly plucking off a chin hair with tweezers. “But the ice is well covered. We don’t have to worry about dirt or pollution. No one is going to get sick. If the ice ever gets dirty, we just take some water and wash it clean.”

After all, dirt doesn’t make you sick. Just ask any fisherman.

I Can’t Get No Satisfaction