Plastic pollution is reaching very high levels in Bali. Almost 30 million plastic bottles are used every day and disposed of in different ways, many simply abandoned into the environment. While waiting for some effective governmental actions, can we do something to reduce our impact on the world?

An early morning walk along one of the most famous Bali beaches can be a rejuvenating trip, or a visual nightmare. Before the daily cleanup is done (at least on the very famous beaches or in front of beach resorts), it’s not rare to walk into the middle of a garbage deposit. “It’s because of the rainy season”, is the most common comment I’ve heard. I keep wondering how strange it would be to see all these plastic bags and bottles falling from the sky.

The journey of a plastic bag or bottle starts from far away in time and in space. The beginning is a 3-billion old deposit of petroleum, situated in a variety of locations like the Middle East, Africa and even Kalimantan. The extraction of petroleum has already a number of adverse environmental and social impacts. Oil spills are quite common – remember the Deepwater Horizon oil spill in the Gulf of Mexico in 2010, with almost 5 million barrels of petroleum discharged into the sea?

Once the oil is extracted, it is moved into container tankers for shipping to refinery facilities. This transport is not exempt of risks for the environment; tankers can sink or get damaged and spill more oil into the sea (just a couple of famous examples are the Exxon Valdez in Alaska and the Prestige in Spain). At a refinery, the crude oil can be submitted to a variety of distillation processes, to obtain and separate various components like gas, fuel, plastic and many others. Crude oil can also be chemically treated with some catalysts to obtain hydrocarbon of a desired length: most plastic bottles are made from Polyethylene Terephtalate (PET), and almost all bottles come from newly produced plastic and not from recycling. An estimated 30% of the world’s PET goes into plastic bottles. A similar process leads to the production of 5 trillion plastic bags per year globally (yes, 5,000,000,000,000 plastic bags). 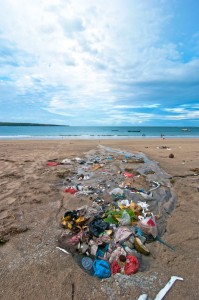 While this kind of plastic is very easy to recycle, after the normal usage only a very small amount goes into the recycling path. The vast majority is simply thrown away, ending up in a landfill, being burned or going – after maybe a long way around trash bins, streets and rivers – to start another journey in the ocean. As much as 10 percent of the 260 million tons of plastic produced annually ends up in the oceans, with different percentages depending on the amount of proper disposal and recycling present in every country.

Plastic in the sea is not just an aesthetic problem. Plastic kills fish, marine mammals, turtles, and sea birds. And plastic remains in the environment for thousands of years, slowly fragmenting into small pieces that are ingested by fish and other animals, and eventually ending up on our plates.

In Bali, the situation is dramatic, slowly improving but still far from being acceptable. Illegal trash dumping is a common practice, and many TPAs are already filled up with rubbish and leaking. The “Bali Clean & Green” program is still quite unclear in its application, and an energetic action is required now. It’s no longer time for a proposal like “We aim to reduce 20% of the floatable plastic in the next few years”. The target should be far higher – at 80% a year minimum.

I believe this would be difficult, but not impossible. Recycling facilities are already present in Bali and most people really care about their environment, and local shops or communities have already implemented many local actions to fight plastic use. It’s already possible to recycle every kind of plastic.

My opinion is that a real action plan should be implemented, setting up two main goals:

Waste management is mainly based on personal habits. Reduce, Reuse and Recycle (3Rs) should be the base of everyday management, but it’s also very important to START CLEANING what is already dispersed into the environment. Plastic and other garbage should be prevented to enter in the sea through catchment of floating waste in rivers like the one recently set up in Amed, one of the areas where the plastic problem urgently needs a solution.

The illegal dumping of plastic and other garbage is a very common practice in Indonesia. In the big cities like Jakarta or Denpasar, some small companies buy trash from big hotels or malls, selectively collect reusable or still valuable materials and dump away the rest. 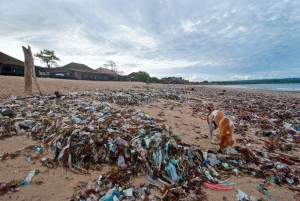 Indonesians, expats and tourists are collectively responsible for their rubbish disposal: they should be correctly motivated and educated, but also enforcement, fines, and judicial follow up should be taken into account. Citizens should have the right instruments to keep the environment clean: put litter boxes at all shops and urban centres, place water gallons in schools and shops where people can refill their bottles, and involving school children in beach or river cleanups are some of the necessary tasks that have to be implemented. When walking along the new shopping centre of Kuta it is hard to locate a rubbish bin. I understand the fear of terrorism and bomb placement, but a solution is necessary.

Of course, the tourists and tourism industry should accept their primary role in this campaign. With actions like clean ups of beaches and reefs, using gallons and cups instead of plastic bottles, using glass bottles for soft drinks, and stimulate tourists to take batteries back home to have a proper disposal.

Private companies also should be involved, offering even sponsorship programs (for example, putting their logo on trash bins, or reusable cotton bags), and asking big multinational corporations to finance cleanup activities – especially these corporations importing and using tons of plastic for their products. The Government should initiate an effective program, not remaining only on intentions: why not ask government officers to start giving a good example by cleaning the route to access their offices, and participate in beach and river cleanups? The Government can also ask military forces to participate, helping local communities to clean up illegal dumpsites, or building catchment systems in rivers.

Plastic pollution is really “Jeopardizing the image of Bali as a tourist destination”, like we always hear in drug trial sentences. It’s an emergency and has the same importance as building new infrastructures. Time is running out, we should act now, with no more delay or excuses.