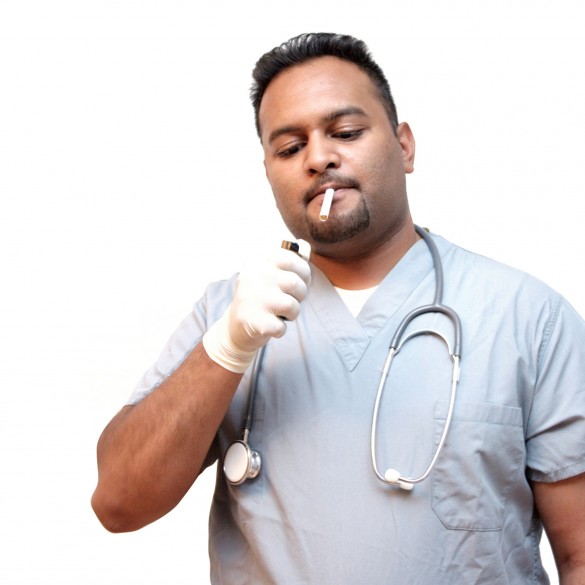 When well-off people in Indonesia need medical treatment, they often head off to Singapore. Daniel Pope thinks he knows why.

When several years of overexertion in the pursuit of decadent fun had begun to give my expatriate friend panic attacks, he sought a consultation with a psychiatrist. I couldn’t resist quipping, “Well, you certainly would have to be crazy to want to see an Indonesian psychiatrist.”

I was no newcomer to such Catch-22s and other idiosyncrasies in Indonesia’s medical industry. A dentist once explained to me during a routine check-up that although I had a bad tooth, he couldn’t extract it because he’d recently undergone heart surgery and wasn’t permitted to do anything strenuous.

But at least he had a fully equipped, private surgery. In Borneo once, I peered into a shopfront window and saw not a shop of any sort but a dentist chair rooted in the centre of an otherwise bare floor. The dentist was lounging in a seat by the wall. He was reading a newspaper like a barber waiting for a customer to walk in. He was also smoking a cigarette.

I can’t abide any medical practitioner that smokes. It’s like a firefighter who deliberately burns himself, or a dietician who stuffs his mouth with cream buns. Not that my own former smoking habit had ever been constrained by such a belief.

One day in 2002 I was rolling a cigarette on my desk at home in Central Jakarta when my arm suddenly went dead, becoming like a rubber appendage. Sensation gradually came back, but not fully. My arm was left feeling vaguely floppy and uncoordinated. If I tried to touch my nose I’d poke myself in the eye.

While persevering with the construction of the cigarette, I momentarily went blind in my left eye. It was time to
see a doctor. I just hoped it went better than the last time I saw one.

That time I had been diagnosed with amebic dysentery, and had been prescribed an antibiotic called Flagyl. Turning to leave the surgery, I asked the doctor whether I was allowed to drink alcohol with this medicine, since I still had some partying to finish off.

In all honesty I expected a flat ‘no’ (this surely would be the default answer even if the doctor was uncertain). But after hesitating, he replied, “Just a little,” and gestured so with his finger and thumb. I must say I was skeptical, but I was at the Jakarta branch of a reputable international clinic so what did I know.

Out with friends that evening, I drank two large bottles of beer, which in those days amounted to much less than just a little in my view, and woke up later in the night sicker than I’d ever been. I threw up so hard I thought my honking might drown out the amplified call to prayer from the local mosque. All the next day I felt nauseous.

But the day after that I felt fine, so I drank again… and was sick again. At last suspecting – or reluctantly accepting – that drinking on top of taking my medicine was the cause of my stomach trouble, I looked up the antibiotic online (this was back in the days when the Internet was still a big deal).

The very first line of information read ‘DO NOT TAKE ALCOHOL WITH THIS MEDICINE; IT CAN CAUSE NAUSEA, STOMACH CRAMPS AND VOMITING…’ There are only a handful of antibiotics that carry a high risk of adverse effects when taken with alcohol. I considered myself unlucky to have been prescribed one of them. I also cursed the doctor for not advising me properly.

Some years later in 2008, a woman who had complained in emails to her friends about the unsatisfactory service she had received at a Jakarta hospital was promptly arrested, charged under the criminal code with defamation, convicted and jailed.

Although the case became a public relations disaster for the hospital – and the woman’s conviction was overturned – it shows that it’s best to seal one’s mouth with an Elastoplast regarding such matters.

Back to my latest problem, the left side of my face had become paralyzed, and I had experienced some mental anomalies not related to alcohol consumption. With a companion at my side, I reached the dubious reassurance of a private hospital in South Jakarta. Here I underwent an MRI scan. My companion, standing near the monitor, alarmed me by shouting, “My God! I can see your brain!”

The doctor had a less hysterical assessment. He said I’d suffered a transient ischemic attack, or TIA – a mini stroke – whose symptoms of numbness were temporary. He recommended a cautionary stay in hospital, and took me through some glossy hospital brochures like a travel agent inviting me to choose a resort to stay at. He also listed the size of the deposits which would have to be paid before I’d be admitted to a ward rather than pointed back out to the street.

Encouraged by the word ‘transient’ in the name of my disorder, I replied that I’d prefer to remain an out-patient. So the doctor prescribed a daily dose of Aspirin and advised me to take all the usual measures – stopping smoking, eating well, exercising regularly – to help reduce the risk of further attacks or worse.

Just a single Aspirin later the next morning, in my classroom at the school where I taught, a small bomb went off inside my head. The left side of my face felt like it had been blasted off. My ears rang. I couldn’t speak (at least not without sounding like the Elephant Man). So I gave my students a lop-sided smile, and staggered from the room. Maybe some hospital observation was in order after all.

Recalling the steep prices in the brochures the MRI doctor had shown me, I chose to stay at a public hospital in order to save money. Hospital bills are usually long and meticulously itemized in my experience. At a glance you’d think they must include the price of each individual molecule making up your plasters and bandages.

Conditions at the bustling establishment in Central Jakarta where I settled into bed were so primitive that I expected to see Florence Nightingale on duty. The corridors were packed and the open wards, although old and with their paintwork heavily scuffed, appeared make-shift, as though set up in a hurry to deal with a disaster such as an earthquake. It was hectic. Visitors smoked. Patients smoked. The doctors smoked.

As an EFL teacher, I had taught many doctors and nurses. They were invariably keen students. Indeed, one general practitioner taking an English conversation course, when unable to attend a class, had insisted on participating over a speaker-phone link. He was thus represented in the classroom by a small green telephone on a desktop. In this diminutive, tinny-sounding form he answered questions and generally remained involved throughout the lesson.

However, I was beginning to have concerns over his motive for wishing to be absent from the classroom. This was because, while the rest of the students were silently writing, I clearly heard coming from the speaker the scrape and hiss of a cigarette lighter being struck, followed by the soft crackle of tobacco igniting, and lastly the audible satisfaction of the GP exhaling smoke. Then coughing.

Every so often, my expat drinking buddies amuse themselves, or perhaps celebrate their own continued survival after years of unhealthy excess, by counting off on their fingers the number of people they’d known over the years who had bit the Java dust. Some of those deaths are through medical negligence.

I am happy to say that following my hospital stay and some lifestyle changes, my TIAs eventually cleared up and I am not yet on that list. Nor has the berserk state of the medical industry in Jakarta ever prompted me to seek the services of a psychiatrist.