When I first arrived in the early ‘90s, it was close to impossible to find any English language books about Indonesia. Things have changed.

The Internet was not yet available back then and there were no English language bookstores. In fact, there were few bookstores of any sort. Gramedia, of course, sold Indonesian books, focusing mainly on how to get better at business or in religion. But outside of Jakarta there was little. When I moved to Lombok in 1999 I could find no bookstores at all, bar a couple of dusty stalls selling pirated copies of school textbooks and technical manuals. The same was true for most of the country.

I used to buy my books in Singapore or Melbourne. I would drive to the outer suburbs where a small store specialized in books about Indonesia and Asia. I bought more or less everything I could find about Indonesia for a general readership. My early collection included Christopher Koch’s The Year of Living Dangerously and Pramoedya Ananta Toer’s Buru Quartet (published in English by Penguin), all of which were then banned in Indonesia. Then there were occasional copies of Inside Indonesia, the only independent source of information and analysis about Indonesian politics and society at the time.

Other early acquisitions included Franz Magnis-Suseno’s marvelous book, Javanese Ethics and World-View (The Javanese Idea of the Good Life), and Bill Dalton’s essential Indonesia Handbook. Conversely, I read Ratih Hardjono’s White Tribe of Asia, an Indonesian view of Australia. But to a book-hungry young man who had fallen in love with Indonesia, the country remained pretty much a mystery. Of course this was how President Suharto intended it.

Twenty-five years later and we are spoiled for choice. Bookshops like Kinokuniya, Books and Beyond, Aksara, and Ganesha cater to English language booklovers, Periplus stores can be found in airports and malls across the country and, every October, the Ubud Readers and Writers Festival celebrates literature from Indonesia and the region. Indonesian bookstores have appeared in malls in most cities, and the 2015 Frankfurt Book Fair featured Indonesia’s flourishing literature scene.

The number of books available, both in English and Indonesian, has exploded.

Indonesia’s new breed of novelists is pushing the limits and, thanks to the efforts of the Lontar Foundation and others, many of their works are available in translation. The shelves are also full of books on Indonesia and the Indonesian experience written by sojourners and expatriates. Erudite analyses of Indonesian history, politics, society, environment and religion vie for space with titillating tales of Jakarta’s sex industry and sordid exposes of Bali’s drug scene. And, in between, there is everything from popular history and anthropology to novels and travel tales. The best of these provide new insights, getting under the skin of this diverse and dynamic country, while at the same time entertaining and amusing.

Notable reads in the last year or so include Tim Hannigan’s Raffles and the British Invasion of Java and A Brief History of Indonesia, Elizabeth Pisani’s Indonesia Etc., Andrew Beatty’s A Shadow Falls in the Heart of Java, and Nigel Barley’s In the Footsteps of Stamford Raffles, Toraja: Misadventures of an Anthropologist in Sulawesi, Indonesia, and Island of Demons. 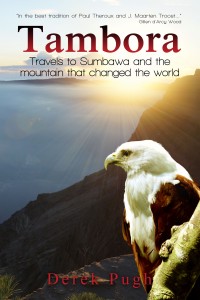 While the market for personal memoirs is crowded, self-publishing has democratized the industry. Everyone has a story to tell – and now they can tell it. Three books which have had less airtime than the above, but all of which shine a light on Indonesia and the expatriate experience, are Derek Pugh’s Tambora: Travels to Sumbawa and the Mountain that Changed the World, Stanley Harsha’s Like the Moon and the Sun, and Arlo Hennings’ Guitarlo.

Derek Pugh’s story of travel to Sumbawa, published in 2015 on the 200th anniversary of Tambora’s catastrophic eruption, takes the reader from the science of volcanology to history and personal travel narrative. By the end of the book I found myself considering a plan to climb Tambora, thinking very seriously about the risks of living on the Ring of Fire, and hankering for some more offbeat travel.

Tambora is full of stories and characters. We meet the ancient daughter of Bima’s sultan, the child jockeys of Sumbawa Besar, and the doped-out surfies of West Sumbawa. All set against the backdrop of that giant mountain and the havoc it wrought on the planet 200 years ago. Perhaps best of all, Pugh, an Australian expatriate, writes as if he is introducing these characters, telling these stories over a beer at the bar, or perhaps sitting by a campfire on a beach. Tambora is a great yarn. 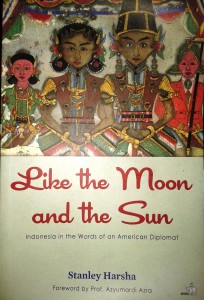 Stanley Harsha’s Like the Moon and the Sun takes a very different tack. Harsha is a former American diplomat, who first came to Indonesia in the 1980s. Like Pugh and Hennings, he is married to an Indonesian woman and through that marriage has come to know Indonesia. The book tells the story of his marriage and much more; it follows Harsha as he discovers Indonesia and travels the archipelago describing the cultures and politics he encounters through his work.

The book is published by Gramedia, both in English and Indonesian. Through story and reflection, it is an appeal for Indonesians and Americans to get to know one another. The title, Like the Moon and the Sun, is from an Indonesian proverb that describes a perfect match, the balance of two contrasting peoples and traditions, each enhancing the other. Harsha has a deep understanding of the country and describes Indonesia’s peaceful transition from a dictatorship to the world’s third largest democracy, critically analyzing religion, human rights and the war against terrorism with the perspective of an insider and the benefit of an outsider’s experience. This is a reflective tale written by a serious man, but that seriousness is never allowed to descend into self-importance, tempered as it is by a sense of humour and a fondness – perhaps ‘love’ is not too strong a word – for Indonesia and its people.

Arlo Hennings’ memoir, Guitarlo, is a very different kind of book. Hennings is a colourful character and, unlike Harsha, that character is reflected in colourful writing. The style is pure rock and roll, over the top, at times fantastical, at times self-confessional, but never dull. At 15 he ran away from home in the US for a life on the streets, falling in with drug-crazed counter-culturalists, narrowly avoiding a lynching by red-neck farmers, getting picked up by a busload of hippies and stumbling into the midst of three days of peace, love and music at Woodstock. Following attempts at a ‘normal’ life as a dental mechanic and a travelling salesman, he discovers a talent for music management, which takes him to the heart of the American music industry and subsequently to South Africa. 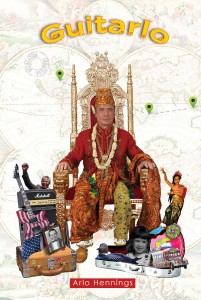 Hennings’ Indonesian experience contrasts with that of both Pugh and Harsha. His disappointments with Javanese builders and Balinese neighbours, his attempts to establish a homestay in Ubud, his wedding in East Java, his diversion into new-age spiritualism, becoming an unwitting witness in a murder case, and finding a new life in Jogja, all are the experiences of a newcomer, a man who is still coming to grips with his newly adopted home, its culture, language and legal system. But the writing shines with a raw honesty that endears us to the writer, allows us to forgive him his excesses and misadventures: by the end of the book, Arlo has become a friend, a likeable rogue.

Gramedia: www.gramedia.com (Indonesian and English books, stores in most cities)

The books reviewed in this article are available on Amazon, or direct from the authors:

Back to the Bamboo Roots: The Secrets of Senyawa

You Can Check Out Anytime, but You Can Never Leave