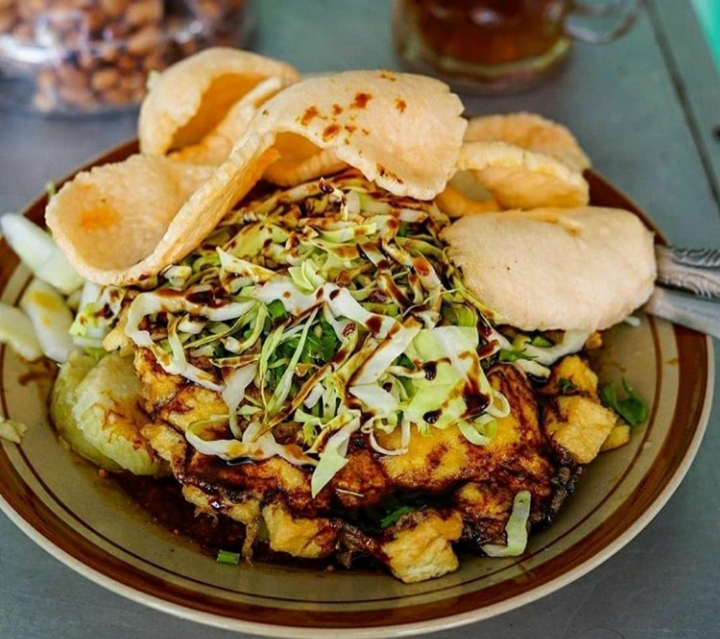 If you are a foodie, tahu tepo lontong is an absolute must-try.

This traditional dish comes from a city in East Java called Ngawi. You can enjoy tahu tepo lontong with the people closest to you or at any event – it really is appetising!

Tahu tepo lontong consists of basic ingredients such as tepo or rice cake wrapped in banana leaves, tofu, and various other additives. It is normally served with eggs, crackers or kerupuk, onions, beansprouts, and a peanut sauce.

Some people also call this dish tahu tek or tahu kecap. These variations are from Surabaya, Magetan, and other cities in East Java. Oftentimes, the shape of tepo is different in every city. Tahu tepo is usually served with peanut sauce or even brown sauce. The fried egg beside it also consists of sprouts, cabbage, celery and fried onions. There is also sliced tomato in a gravy that’s moderately spicy due to the cayenne pepper but also has a sour tinge from the tamarind water and of course, the sweet and distinctive aroma of the brown sugar. Finally, the dish is topped with crushed crackers.

Tahu tepo lontong is on the affordable side. You don’t need to worry about it because one full portion costs Rp6,000-12,000. A very good deal, right?

This dish is one of the best snacks to eat to fill up your stomach. It first appeared in the 80s and today, it has become one of the best foods for the Ngawi residents who get this dish after returning home and make up for the longing for the enjoyment of tepo tahu lontong. Now you can find this dish anywhere in shops, or order online through a marketplace or an e-commerce vendor.

Get Wrapped Up this Festive Season