After the critically acclaimed and controversial Act of Killing, American documentary director Joshua Oppenheimer is back with The Look of Silence or Senyap. With this latest documentary, Oppenheimer tries to answer some of the criticism towards Act of Killing or Jagal. In Jagal, he trailed Indonesia’s bloody history in 1965 through the eyes of the murderers of suspected communists. In Senyap, he shed light on the tragedy by presenting the victims’ stories.

Senyap starts with Adi Rukun sitting in front of the television, watching old interviews between Oppenheimer and the murderers of 1965. He sat there quietly as he listened. On his face, we can see images of the murder of his brother. His eyes glistened. His silence, deafening.

Senyap tells about a survivor’s hunger for justice and reconciliation. In this film, Adi Rukun discovers how his brother Ramli was murdered and the identity of the men who killed him. 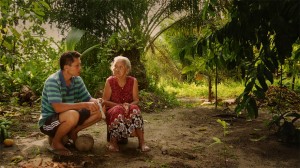 Adi Rukun’s journey started when he caught director Joshua Oppenheimer interviewing his parents at their house. When Adi found out Oppenheimer was making a documentary on what truly happened in 1965, he jumped into the idea and immediately demanded that he could confront the murderers. Oppenheimer was apprehensive and hesitant, as he was worried for Adi’s safety. Oppenheimer finally agreed to have Adi on board when Adi expressed his personal mission – to erase stigma attached to the victims and their families, as well as reaching reconciliation between victims and the murderers.

Adi works as an optometrist who goes around the villages in North Sumatra, giving the elderly better vision by providing glasses. The elderly he visits are the murderers of his late brother. In their seemingly light conversation lies an intense grilling of the tragedy.

As documentary captures life, naturally it presents memorably strong ‘characters’. You cannot help but fall for and admire Rohani, the mother of Adi and late Ramli. After losing her son, Rohani may seem to look at life in the face, but deep down she never forgets the day the military forcefully took her already injured son away from her for good. She continued taking care of her aging, helpless husband, putting on a brave face as if nothing had happened, while for decades carrying the wound that never heals.

Of course, Oppenheimer did not have original footage of what happened in 1965. He does not present graphic gore but he draws a picture in our minds by showing images of animals in strange positions and context. This, in my opinion, quite successfully created a discomfort amongst the audience. These images somehow explained what had happened in 1965 to the innocents who were accused as communists, pinched and slaughtered by the military and those who were against the Communist Party. 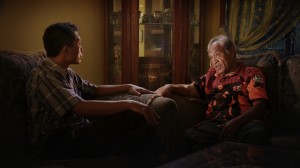 When Jagal came out, as an Indonesian, I watched it with a pinch of salt. I caught myself wondering if this was another case of a foreign filmmaker imposing the way he sees Indonesia. But in Senyap, the American documentary-maker takes a neutral position as he does not miss a chance to highlight America’s involvement in the bloody incidence of ‘65 and allows Adi Rukun to tell his story the way Adi and his family see it.

Oppenheimer presents a documentary that lays out all the facts and allows the audience to feel differently about it when the film ends. Some exit the cinema feeling they need and want to be a part of straightening history. Some remain sceptical. Whatever the outcome, it successfully stirred a discussion among the media and in society.

I noticed in the closing credits, there were plenty of anonymous personnel involved in the making of Senyap. They were most likely Indonesians. This itself is a statement that even though this documentary exists, there is still much fear in associating oneself with the bloody tragedy of 1965. Despite making it big, hopping from one high-profile film festival to another, Indonesians, or those who reside in Indonesia find it difficult to access the film. Senyap has not graced any of the screens of commercial cinemas, at least not in the near future. This poses the question, when will Indonesia ever be ready to face its past history and reality? Adi Rukun and family are only some of many who bear the stigma and are continuously waiting for reconciliation.

The way I see it, this is a documentary that will remind us not to ever repeat what happened in 1965 – a propaganda that went wild, faced with no analysis, which made us forget what it is to be human and to be humane to one another.

Senyap has won five awards from Venice Film Festival 2014, including FIPRESCI Prize, Golden Mouse, Fedeora Award, Grand Special Jury Prize and Human Rights Film Network Award. It was also one of the nominees for the highest awarding category in this festival, the Golden Lion.

For more info on this documentary, you can visit the website http://thelookofsilence.com. You will not be able to see the trailer on this website as it is blocked by the government.