It was a busy night at the Yoga Barn Ubud, when my fellow journalist friend and I went last month. We didn’t come for a yoga class, but for the screening of Jalanan movie held as a fundraising program to give the casts a permanent home.

The screening was the fifth one to be held in Ubud, said the director and producer, Daniel Ziv, but people were still enthusiastic to come and packed out the temporary open-air theatre located in the backyard of this yoga studio. Nadya Hutagalung, an Asian celebrity was also there.

This award-winning documentary tells a heart-warming story of three street buskers, Bambang “Ho” Mulyono, Titi Juwariyah and Boni Putera, serving as protagonists of their own life story. Everyday, they jump into public buses to entertain people with their amazing voices and guitar performances, in the hopes of being able to collect small change from generous bus passengers to go towards their daily meals. 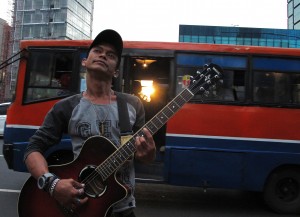 These marginalized people have lived the life no one should lead. Boni has made a sewage canal bridge his home for over 10 years, Ho had to experience getting thrown in jail during a raid for buskers and received an uncomfortable treatment from the officials, and Titi struggled to balance study, work and family while trying to finish her education in a special school for drop-out pupils.

But don’t expect to watch a tragic dramatized self-pity story of the poor, which is often presented by media in Indonesia. Jalanan shows an inspiring story of the three characters who dare to take charge of their own destinies and refuse to be viewed as victims of social injustice. For a movie that brings up heavy issues like poverty and politics, Jalanan is very entertaining. For 107 minutes, audiences will be entertained with colourful scenes, stirred with lots of music, funny jokes and empathic moments of them while struggling to survive in a city with no mercy.

This epic, witty, and thoughtful movie has successfully touched the hearts and opened the mind of audiences from many different levels of society. In Indonesia, Jalanan has become one of a few documentaries that could make its way into commercial cinemas (which was ironically played in Jakarta’s most exclusive cinemas – a contrast for a movie that brings poverty as its theme). It also has received close attention from government institutions such as the Corruption Eradication Commission (KPK) and Governor of Jakarta, Basuki Tjahaja Purnama (Ahok), who personally hosted screenings and made it a tool to educate his officials to conduct more humane approaches when dealing with marginalized people. 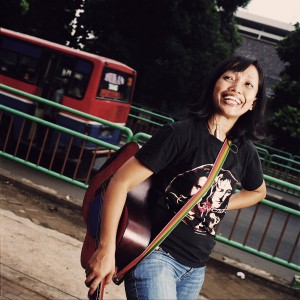 Back to that night at Yoga Barn, Daniel Ziv introduced us to the stars of the movie, flown in from Jakarta to give the audience a surprising performance at the end of the screening. When we met, they gave us their warmest greetings and big smiles, and soon we got engaged in an intimate conversation talking about their new exciting life, including visiting countries overseas when joining the film festivals, and becoming ambassadors in Jokowi’s presidential election. Titi also told us about her role in teaching at Wimar Witoelar’s school, such an impressive achievement for her after those years struggling with her studies.

But the life they have now is not an overnight success that has made them rich quick (Ziv said that documentaries don’t make that much money in Indonesia). Despite getting wide acknowledgement, tonnes of exposures and many opportunities, these three buskers are still struggling to get by.

“A film doesn’t fix lives, but it can bring acknowledgement, which for many of these people is really all they ask. But I’m still concerned about their long-term future, because their current fame, and even the opportunities, won’t last forever,” says Ziv. “Assisting them financially seems logical, but I’ve learned through years of experimentation that handing them money – as in cash – never works. Putting a roof over their heads will give them a home they can own and that remains an asset throughout their lives, which seemed the most responsible, lasting way of doing that.” 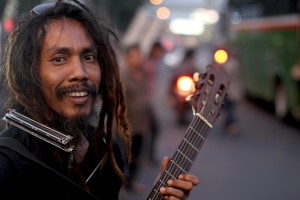 “Every time we have a Jalanan event, like a screening or concert or when I give a talk, audiences ask how they can contribute to making a difference in the lives of the film’s three characters,” he says.

He then encourages people to read about their housing campaign, either via the film’s website (jalananmovie.com) or their Fundrazr website page (www.fundrazr.com). People can contribute either via the Fundrazr website or in Indonesia via direct transfer to a dedicated BCA account he set up for this purpose. In total, they are trying to raise $50,000, which he thinks should be just enough to buy them modest houses in low-income neighbourhoods of Jakarta.

He plans to get a house not just in the form of shelter, but as permanent freedom from rent, debt, danger and homelessness, with a legitimate land certificate so it cannot be taken away from them. “I plan to deposit the certificates with a third party – my Indonesian partner production company that also doubles as an environmental NGO – so that the buskers cannot be pushed into pawning off their property no matter how intense the pressure may be from those around them.”

The Yoga Barn fundraising screening has succeeded in raising Rp.9.9 million, adding it to Rp.168 million, 33% of the total expected amount. Jakarta’s Governor Ahok himself has donated Rp.50million for these guys.

“Boni, Ho and Titi are dear friends, and they are my partners in creating something really fresh and different that wasn’t there before, and I think that’s been transformational for all four of us. I want them to be happy [in the future],” says Ziv. “[I hope the house can be] something that will be theirs to keep. A place they can live or rent out or raise kids in. While they will always be responsible for their fate and need to continue working hard and acting responsibly, I wanted to do my part in helping them move forward in life.”

To give your support, visit www.jalananmovie.com/housingfund or Fundrazr page www.fundrazr.com/campaigns/dgEM6. Donations via bank transfer can be made to PT. Akarumput, BCA KCU Denpasar, Account no. 0402659210. Donating $50 will get you a Jalanan DVD!