It wasn’t unexpected although it has happened many times before. But still, when confronted with the swirling mass of brown water on the street that only the other day was used by cars, buses, ojek and pedestrians, one can only be amazed, and at the same time rather irritated. The top east-west section of Kemang Raya was totally flooded, nearly one metre deep, and this had created the worst traffic gridlock at the Kemang-Antasari junction.

We have all heard it before. What factors contribute to the floods and how difficult flood prevention is without huge, complex and multidimensional infrastructural intervention; banjir (flood) canals, intensive dredging of the main rivers, a car-traffic tunnel that, when needed, can be turned into a floodwater catchment tube, and much more. But let’s face it, these are all traditional reactive rather than proactive activities.

Flood disasters are now increasingly being seen as the outcome of cumulative risk processes rooted in poor land-use practices, ill-conceived development projects, lack of rules and guidelines, absence or inconsistent law enforcement, etc…The populations should be made aware that it is impossible to protect them against the risk of flood. Make them understand the meaning of risk, that the risk of flood is real and it is always there to strike at any time.

After the disastrous floods of 2007, exactly that had already been attempted during the second half of that year, with a project aiming to strengthen the communities’ proactive involvement in flood prevention and mitigation. Two of Jakarta’s neighbourhoods, the kelurahan of Petogogan and Tomang, were selected to try out this new approach and the population was informed in depth about the objectives of the project and asked to contribute their time and efforts.

The response in Petogogan, located in the floodplain of the Krukut River, was exceptionally good. The area floods at least once a year up to a few centimetres; in 2007, however, the floods had reached a height of 2 metres. Tomang, located partly on the bank of the West Banjir Canal and partly on higher ground, was as a whole less interested, probably because the families on the higher ground did not feel the need to participate.

The photographs below are meant to give a general idea about the two neighbourhoods; examples of the participatory activities are, however, for Petogogan only.

In Petogogan the people formed committees for each sub-unit (RW) of the neighbourhood. After some detailed instructions, they enthusiastically undertook the tasks of surveying the area’s drains, flood-prone areas, and ways garbage and other waste was disposed of. 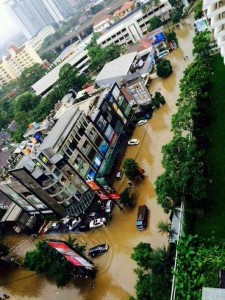 The information collected was then discussed and mapped and discussed again, and finally, a programme was drawn up on what preventative action could be undertaken by the population.

The drains were ranked according to who would be responsible for their maintenance; community or government. The community would take care of the drains that could be cleaned by hand – the minor ones – and the government would maintain those where equipment was needed.

The way waste and garbage from households, shops and small-scale industries are disposed of were also assessed. The finding here was that people were very much willing to dispose of garbage in an environmentally friendly way. However, garbage collection, as organised by the municipality, was irregular and insufficient.

No wonder then that much of the waste ends up in the drains and rivers.

And even if individuals have a certain reluctance to dispose of their garbage this way, the large amount of waste already floating in the river is basically a silent approval to copy everybody else’s behaviour. “If they do it, why shouldn’t I!”

And that seems to be the real problem. The “Power of One” gets swamped in this case, literally. Somehow a threshold volume of correct waste disposal upholders needs to be formed, and not only in one stretch of a river, but along its whole run. At the same time, of course, the basic infrastructural facilities and services need to be put into places, such as garbage collection points (that are frequently emptied) and an effective O&M for the major drains.

It can be concluded that in Petogogan and Tomang the enthusiasm of the communities to do something was very soon extinguished as the expected follow-up from the municipalities never materialised. The main drains remained clogged, or after having been serviced once were taken off the activities roster.

It would be highly advisable if the authorities were to try again, and again and again because several studies have shown that proper drainage of the Jakarta waterways would reduce flooding by up to 60%.

The problem is enormous, but not unsolvable. What has become clear is that, if properly approached and supported, people are willing to contribute their share in flood prevention.