Meet Tah Riq. The young Jordanian who went from computer salesman to musician, motivator and parkour athlete through the power of attraction. 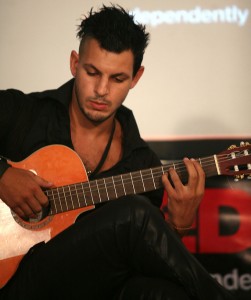 Tah Riq, you’re a true expat having lived in Jordan, America, the UK and now Bali. Can you tell us when and why you migrated to Bali?

I moved here about two and a half years ago from Hertfordshire in the UK. It’s kind of a funny story. I had never been to Bali, never picked up a brochure and read about Bali, I had no connection or link to Bali other than a friend of mine who knew me really well. I got made redundant from my job in the UK just as I was handed keys to a nice new flat next to work, so in one day I had no job, no house. I started speaking to friends of mine who were dotted around the world and this one particular friend told me to come to Bali. My reaction was, “Isn’t it like a giant village? What am I going to do in Bali?” Then she described it to me as the most creative, entrepreneurial place that will nurture your passions, your hobbies and that I would find myself here. So I literally bought a one-way ticket and came out here with the attitude: “Hey, I’ll give it a try.”

So what was life like for you in the UK?

There’s something about being in the UK that I couldn’t really put my finger on, but for me it was like being in the Matrix. It was like there’s something wrong with the world and I don’t know what it is, but for some reason I felt really stifled. Too many arbitrary rules imposed on you for no other reason than to occupy your time and thoughts.

Were you performing in the UK before?

No, I used to play guitar and I had a scholarship to the Royal Academy of Music in London, but it was all just for me. I think that’s one of the beautiful things about this island – if you’re really passionate about something, Bali really brings it out along with circumstances that allow it to blossom.

So how did your musical talents get discovered here?

I was in Ryoshi one night watching jazz and I’d brought my guitar with me. There was an older Frenchman sitting next to me who said, “Oh, you play guitar? What style?” and I told him Spanish Flamenco, classical. We had a little conversation and that was that. A week later I was in Made’s Warung and I saw him playing during the break. He recognized me and asked me to play his guitar and I was like, sure! The place was packed with around 250 people and I played for ten minutes. Next thing I know the place was cheering and the owner came up to me and said, “How would you like a regular gig?” I replied with, “Can you throw in accommodation?”, she agreed and next thing I know I’m playing music and I have a place to stay!

Were you taken back by it all?

Actually the first two weeks I was here I didn’t like it at all. I felt like a little boy lost in the woods – I didn’t know anyone and I was out there in the middle of nowhere as far as I was concerned as I was living in Ungasan before I moved to Seminyak. I was actually planning on heading back to the UK after the visa ran out. What was the life-changing factor that persuaded you to stay?

Well, I’d never ridden a motorbike before in my life and I knew that to get mobile was the next step for me, so a friend of mine took me all the way from Ungasan to Umalas to get a bike because that’s where he happened to stay. I had to drive with my new bike from Umalas back to Ungasan and I’d never driven a bike before and I did this at night after it had been raining! It was a strange kind of do or die moment and I stayed to the left of the road, driving really slowly, but I made it. When I parked the bike up at my friend’s place in Ungasan I thought, “If I can do that, I can survive here.” And then pretty much the next day everything started to go right. It’s almost like you have to prove you’re worthy in a way. I’m not saying everyone should get on a bike with no experience and drive down the highway, but take a risk and have the guts to do so and you will be rewarded.

Can you tell us about the inspiration behind your TEDx talk in Ubud titled ‘Taking a Leap from Desktop to Rooftop’?

If we rewind in time a little bit, after I graduated I had no money so I had to increase the hours of my part time job while I was looking for an animator’s job and my part time job was selling computers at PC World. When I increased this to full time it was quite soul destroying because all my time and energy was being taken up by this, as far as I was concerned, careerless vocation.

Around about the same time I started to get into free-running parkour; climbing walls and treating the environment just like one big urban obstacle course. One day I was on top of a roof after having called in sick for four days and I was with an amazingly inspirational man named Daniel Ilabaca, who is one of the world’s best free runners by far. I said to him, “I’d love to be able to jump off a roof like this.” We were about 14 or 15 feet high and he said, “Why don’t you jump?” To me it scared me so much the thought of jumping off this roof that it felt like quitting my job. Over the course of this weekend up there with this guy, I pushed myself past so many mental obstacles that on Sunday I ran and I jumped off the roof. I walked into work the next day and resigned and that was it, no more PC World. I quit my job at 9am and managed to get myself a job animating at noon the same day.

What a great story. Do you have another talk coming up?

Actually yes, I will be speaking at TEDx Moscow in September if I can get it together in time! 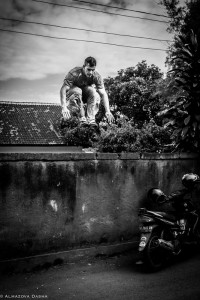 Good luck preparing for that! Was parkour scary to begin with?

Well actually my biggest fear is injury and I was worried about scraping my chin or twisting my ankle, but I really loved parkour as for me it’s a way to subvert the rules of the system. If you’re going to put this railing here to tell me that I can’t go there, I’m going to use that railing to demonstrate my freedom – kind of like a quiet rebellion.

Do you think that’s where the mind over matter stuff began?

For sure. I got to a point where I could climb walls twice my height and I was much stronger and fitter and less fearful than I was when I began and thought, “What the hell am I doing selling computers?” That’s when I called in sick for four days and experienced my life-changing weekend.

It all comes together now. So back to Bali, do you think this island has changed you spiritually?

Oh my God, yes. 180 degrees. More than anything else here, it’s time and space – the space to sift through your thoughts and the time to hone, craft and nurture your talents and interests. Time and space were two things I really lacked in the UK. Here I stay away from negative media, as I can’t get into a positive creative space with these influences. Now I’m actually really selective about what I read, what I take in and as a result I’m the most creative and passionate I’ve ever been.

What advice would you give to someone who’s stuck in a rut like you were before?

Take a leap. Without a big risk you can’t get a big reward. When you’re ready to make a leap of some kind, the universe asks you a silent question, “Is the life you have right now what you want?” If on some vibrational energetic level you answer, “No, it isn’t”, the Universe goes, “Ok then, we’ve got to free up your life from all of these things that attach you to your current patterns in order to make room for all this new stuff to come in.” You’ll find it’s a very common story – just before people discover what it is they want to do, they lose their job, their house, their car, finances, relationships, they literally purge everything they have in their life and start again. It’s at that moment that the greatness begins.

I can see why you’re a motivational speaker! How about your music – what makes you different from other performers?

I play Spanish guitar but I use quite a complex live-looping set up so I basically fill out a whole band without pre-recording. I do the bass and drums by beat-boxing, I play guitar, sequencing and looping it all live. I was terrible at it two years ago, but now I’ve actually gotten pretty good!

My final question for you is do you consider yourself successful?

Someone once said to me, you have to categorize yourself, what are you? Are you a guitarist, a copywriter, a poet, a rapper, a graphic designer, a parkour athlete or what? My answer was, “I’m all these and more.” I’m not a jack of all trades – I make it my business to get good at doing the things I love. To me success is earning enough money from doing what you love to keep on doing what you love. Passion today, passion fruit tomorrow.

Thank you, Tah Riq. To listen to his music check out http://soundcloud.com/paramitshamusic or email [email protected]

Business as a Driver of Change: Meet Lorna Dowson-Collins