Along Jalan MH Thamrin in Jakarta, people will find several banners showing Governor Jokowi’s apologies for any inconvenience caused by the project construction to road users. “After 24 years of dreaming about having an MRT, finally Jakarta residents’ dream will come true. In the name of God, the construction of the first MRT track has begun,” Jokowi said in the ceremony.

According to PT Mass Rapid Transit Jakarta (PT MRT Jakarta), Stage I extends along approximately 15.2 miles from Bundaran HI (Hotel Indonesia traffic circle) to Lebak Bulus. There will be 13 stations in the North-South Corridor route of Stage I. Each station will be set apart by a few kilometres, ranging from 0.5 km to 2 km. The estimated travel time from one corridor to another is around 30 minutes.

Stage II, which involves the South-North Corridor, will connect Bundaran HI to Kampung Bandan over an 8.1 km railway. The estimated travel time along the corridor would be 23 minutes, with the distance of each station ranging approximately from 0.8 km to 2.4 km. The South-North Corridor, which is targeted to start operating in 2018, is expected to serve 629,900 passengers by 2037. 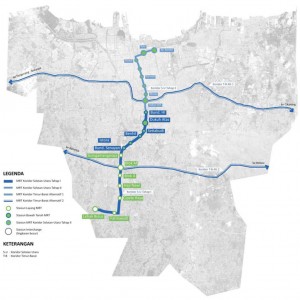 In 2020 – four years of post-operational North-South Corridor Phase I – 412,700 passengers are expected to be served by this mass transportation. The passengers will enjoy an average distance between intermodal stations of five minutes at the maximum. After the North-South Corridor construction is completed, the East-West Corridor will be built, which is currently still at the pre-feasibility study phase. It is targeted to be in operation between 2024-2027.

Since the time of the previous governor Fauzi Bowo, the MRT has been just a dream the people of Jakarta have had for equalizing with the advanced transportation systems present in foreign developed countries. Neighbouring countries such as Malaysia, Singapore, Thailand and the Philippines have long since developed MRT systems to cope with traffic congestion in their respective capital cities.

All in all, the benefits of MRT will be fruitless if the city does not draw up supporting policies. One of the best ways of mainstreaming this MRT is to grow public interest by involving the following measures.

First, successful implementation of the MRT as a cultural movement calls for strong leadership. It is not necessarily interpreted as an authoritarian leader. A leader is required to be a good role model for society. Government officials, for example, might set this movement in motion by taking public transportation. They should set an example by staying at residential areas easily accessed by public transport.

Creative breakthroughs indirectly supporting the development of MRT need to be made regularly. Car free day initiatives on certain roads should be viewed as a populist program or solving the bottleneck node problems and traffic congestion problems for a while. Instead, it must be bolstered gradually since this program is instrumental in raising public awareness and needs of efficient, healthy and environmentally-friendly lifestyles.

Second, the implementation of sustainable MRT entails coordination among different sectors and levels of government. An increase in public transport would be more realistic if accompanied by disincentive mechanisms for users of private vehicles on the one side and incentives for public transport users on the other. Like it or not, the city’s next job is to change people’s behaviours through both educative and repressive measures.

Governments need to consistently manage the impact of the automobile industry on people through high taxations and selective fuel subsidies. As compensation, the government can divert existing funds for the development of mass infrastructure. Rather than relying on toll roads, for example, massive railroads construction should be a priority. Third, it is often that major stumbling block is not bound to the MRT service quality but its supporting facilities. Therefore, within an integrated MRT development framework, the government should start thinking about reliable feeders connecting MRT routes to settlement centres. In addition, pedestrian paths linking shelters to central business districts and offices need also be improved.

In the long term, the growth of settlements and new activity centres in the city’s master plan needs to be integrated into the MRT. Building affordable apartments downtown to shorten residents’ commuting journeys is unavoidable. In a big city, 80 percent of the residents should live in vertical housing downtown.

As a means of urban-scale transport, the MRT ought to be in unison with regional and national-scale transportation systems. This can be done by developing intermodal nodes such as MRT stations being combined with the expansion of bus terminals, train stations, airports and ports. For the sake of convenience, the payment system should use automated technologies, like prepaid cards or chips, which are adapted to other public transportation.

Fourth, MRT development should begin with a simple thing like the improvement of the Busway. Along with the complex transportation system in the capital, the next program certainly involves more complex modes such as monorail, tram and subway. In addition, it is undeniable that the development of MRT will lead to job losses since the city’s transportation sector is more capital-intensive by nature. Thus the government needs to explore every avenue dealing with the process of adaptation and the transfer of transportation sector employers in stages through capacity building, capital assistance and provision of new jobs.

The busway in the capital, called TransJakarta, remains relevant. To keep TransJakarta central to the lives of Jakartans, people have to be aware of their responsibilities when using the buses. Many people do not know the rules of getting on and off the buses, and many prefer their own cars to taking the bus. While TransJakarta has no more than 5,000 buses to cater for 350,000 people per day, private cars cater for one to three people at a time. The problem of TransJakarta buses being unable to pass through their lanes due to many cars using these lanes is now being addressed by policing and heavy on-the-spot fines for law breakers.