Discovering the overland and underwater treats on a little island resort off the coast of West Sumatra.

Why do we travel? Is it in pursuit of ticking off as many places on your world map as possible? Or maybe the journey of self-discovery is what keeps you hopping on and off of planes, trains and automobiles, traversing the unknown. Living in Indonesia comes with its pros and cons (as with any country), but one of its many plus points is that there are so many exotic places to explore, and although the journey may not always be easy, the end result is worth it. I discovered this lately with a trip to Cubadak Island located just off the coast of West Sumatra.

The history of Sumatra is rich and complex. Archaeological evidence suggests that Sumatra was the gateway for migrating tribes from mainland Southeast Asia, with hunter-gatherers living along the Strait of Melaka some 13,000 years ago. This popular trading route on the east coast opened the archipelago up to China, India, and the world, thus exposing it to the popular ideas of the time, such as Islam.

Throughout the colonial era, Sumatra saw almost every foreign power stake a claim in its abundant resources: the Dutch set up camp in the west Sumatran port of Padang; the British ruled in Bengkulu; American traders monopolized pepper exports from Aceh; and the Chinese exploited tin reserves on the islands of Bangka and Belitung.

Rich in cultural heritage, this region is home to around 4 million Minangkabau people, one of the last populations to have a matrilineal culture, which directly contrasts the island’s dominant religion of Islam. This region’s natural beauty is also a marvel, with rolling green countryside, endless winding rivers, and mini waterfalls dotting the roadsides.

Getting to Cubadak Island involves flying firstly to Padang Minangkabau International airport, a 1-hour and 20-minute flight from Jakarta. The flight is the easiest part of this journey, however, as we discovered on the 3.5-hour car ride that proceeded, passing over windy hillside roads through forests to reach the island, located only about 20km south of the city of Padang. Usually this drive would only take 3 hours, or even 2.5 if you’re lucky, which we weren’t – as we experienced several delays on two bridge constructions, and a mammoth traffic jam in Padang town. Once reaching the harbour of Corocok Tarusan, we were whisked onto a speedboat for a 10-minute ride, finally arriving at this little resort where time seems to have stood still.

Cubadak Island is unique because it boasts both clear blue waters on one side, and a lush green forest perfect for hikers and bird-spotters on the other.

The beach here is also very beautiful, with white sand stretching for around 1km – perfect for lounging around and reading a good book. But don’t expect beachside butlers or five-star luxury, as this island has its own, more relaxed way of doing things.

Opened 23 years ago by Nanni Casalegno, an Italian man who sadly passed away in 2014, the ‘village’ has been operated by the very friendly Dominique and her husband, Marco (both French) for the last 10 years. The island still has that ‘90s vibe, with its wooden-panelled accommodation reminiscent of the ones you may find along the west or south coasts of Java. I doubt much has changed since it first opened all those years ago.

With a total of 12 bungalows on the island, including a family unit that can be rented as one, or split into two, guests can choose to stay on-land or indulge in an over-water bungalow, suited for honeymooners. The wooden bungalows are what I would call rustic-chic, situated right on the beach, and come complete with en-suite bathroom, downstairs living area and a double bed on the mezzanine. Other amenities include a mini-bar, stocked with large Bintangs and soft drinks, hot water and the added bonus of drinkable tap water, which comes straight from a natural spring on the island. There are no air conditioners here, so if you are prone to feeling the heat, be sure to set the ceiling fan onto high at night. The rooms are perfectly situated to soak up the sound of cicadas and bird song from the forest behind.

The island is very well suited for divers looking to explore a lesser-known region, and the local government are actually planning on marketing this area as the next Raja Ampat. Although I don’t think it is quite on par with what Raja Ampat, the world’s diving Mecca, has to offer, it certainly is not want of trying. With several dive sites at hand, including a house reef, several pinnacles and even a wreck, there are plenty of things to see underwater – although visibility was only around 5-7 metres during our visit.

When not diving, we spent daylight hours frolicking in the clear water, lounging around on sun beds whilst enjoying the sounds of rolling thunder coming from the distant, ominous clouds. Although Cubadak is not exactly isolated – there is a village visible over the water in the distance – you still feel like you’re 100 miles from anywhere.

In the evenings, guests converged and sought shelter from monsoon rains at the bar, located over the water. Here you can enjoy a tea or alcoholic beverage (wines are even stocked at fair prices), whilst enjoying a jam on one of Marco’s several guitars. Wi-Fi is available, too. 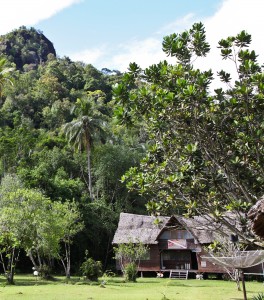 All meals on the island are taken together, so if you don’t like socializing, this may not be your scene. Breakfast is served from 7.30-11am, lunch at 1.30pm, and dinner not until 8pm. The food is quite delicious, and the busy bees in the kitchen can whip up gluten-free and vegetarian meals as well. Fresh fish is caught and shared every day, as we witnessed when the island’s fisherman brought in a freshly caught red snapper to feed hungry guests – and the local dog.

If you enjoy hiking, behind the resort is a large hill, enveloped in forest. There is a path that takes you to the top in about 45 minutes – a spectacular place for taking photos. This path is perfect for spotting birds, including the colourful kingfisher.

If you’re a nature lover and enjoy the thrill of the chase, you should put Cubadak Paradiso Village on your travel list. It took us a whopping eight hours to return to Jakarta, due to road disturbances and flight delays, so I would suggest staying a minimum of three nights to truly unwind and take in what this island has to offer.