I used to think the ultimate culture shock trip from Jakarta was the flight over to saccharine sweet Singapore but equally as eye opening – and for all the right reasons – is a trip to the Thousand Islands (Pulau Seribu), northwest of Jakarta.

Boats leave Muara Angke at 7.00am, and unless you happen to live near this skuzzy and completely rundown area of North Jakarta, you have to get up at some ungodly hour, which, ironically for me, meant being jolted out of bed by the 4.30am prayers which came in loud and clear as I’d made sure to leave the bedroom window open the night before. Thanks God then for those distortion-ridden Chinese loudspeakers high up on the minaret (now that’s something I never thought I’d say!).

It was only at Muara Angke that I found out that the boats going to the Thousand Islands could hardly be described as the last word in boat building technology. Ours was pretty much a typical Indonesian wooden vessel, with a roof so low that only midgets or children under the age of 7 could actually get onboard without having to bend over Quasimodo style. Power was provided by a small Honda engine strapped on at the stern.

And so, with the boat only about three times overcapacity (pray it don’t sink!) we were on our way.

All was well for an hour or so, but midway between Jakarta and the island, the seas started to get a bit choppy and, in no time at all, there were no more smiley faces, and pretty much everyone was puking their guts out as the Sunda Straits churned our stomachs over and over in a torturous ride of passage.

Bleary-eyed we arrive one hour later, incongruously on land which technically falls under the Jakarta administration but is surrounded by wonderfully clear seas as opposed to the dreadful dark brown swill running through Jakarta’s canals.

With no canopy of pollution overhanging, the Thousand Islands the sun is incredibly fierce. Definitely something I should have considered before being fried alive on a snorkeling trip later in the day during which my skin was turned a very painful shade of lobster red.

All in all, there are 105 islands in the chain of islands which make up the Thousand Islands (don’t ask me what happened to the other 895 – maybe they just sank). But as the area is also a marine national park, development has been restricted to just 37 of them.

Of these 37 islands, some are owned by Jakarta hotshots (mentioning no names) and others have very pricey resorts. Pulau Tidung, thankfully, has mostly very simple – but comfortable homestay type accommodations – many with aircon so you can sleep well if you have become used to sleeping with aircon back in madcap Jakarta. 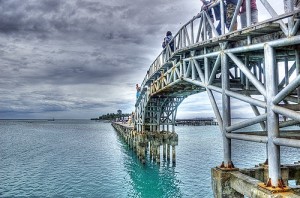 From the main Tidung island you can actually walk to another island called Pulau Tidung Kecil (Small Tidung Island) as a lengthy wooden bridge has been built to connect the two islands.

You can also rent bicycles to get around, although in true Jakarta rent-seeking fashion you are not allowed to take them over the bridge to the other island but instead have to park your bicycle on a plot of land not far from the bridge and pay a small parking ticket!

Snorkeling trips from Tidung can be easily arranged to other nearby islands – especially on Saturday. At the dive site we went to I was amazed to see some pretty decent coral formations – including some really nice tabletop coral – and lots of colorful tropical reef fish. Obviously, it’s not comparable to the wondrous reefs at places like Amed in North Bali or at Bunaken off Manado, but when you consider that you are only 30km from Jakarta it’s a miracle there’s any coral at all.

Getting back to Jakarta was an altogether more comfortable affair as we went by the fast speedboat which shaved a full one hour off the journey time in comparison to the slower wooden boats leaving Muara Angke.

The other good thing is that these speedboats take you to the Ancol Marina harbor (rather than Muara Angke) which is within walking distance to one of Jakarta’s best seafood restaurants – Bandar Jakarta!

This, unbelievably, is technically part of Jakarta!

Pulau Tidung is easily the best island to visit if you are on a budget as the island is relatively large meaning there are locals living there who provide cheap homestay accommodations. Go as a group, and not only is it very cheap (as low as Rp.300,000 pp) but your meals and the snorkeling trip are included in the price. It makes for a great weekend trip and is far more enjoyable than battling the traffic to get to places like Bandung or Puncak. By comparison, the smaller islands are more difficult to get to and accommodations are more up-market and pricey.