In 1994, when travel journalist Ron Gluckman observed the Pasola ritual in Sumba, all of the “signs” were good – the precious nyale worms were abundant, suggesting a prosperous harvest and plenty of blood was spilled by the spear-yielding horsemen. Twenty years after Gluckman’s dramatic account of blood, sacrifice and death, I visited the island of Sumba in East Indonesia to learn more about this animist festival, which happens every February and March. But in 2014, the signs weren’t good. The worms didn’t come and confusion reigned on Sumba.

Now the ancient ways of Sumba are changing because of new variables including the introduction of Islam, tourism, climate change, over-fishing, poverty and damage to the environment. This has had startling impacts on their shamanic culture, which is intimately entwined with the fragile dynamics of the island’s ecosystems. Sumba is considered to be one of the poorest islands in Indonesia economically and sources of income include ikat (fine cloth), tourism, fishing and agriculture.

During my visit to the pasola festival I stayed at the home of Jefry Dapamerang, who worked at the Department of Culture and Tourism of West Sumba. “The function of this department is to promote the potentials [sic] of West Sumba tourism inside and outside the country. The initiatives to bring tourism to Sumba opened new work opportunities for the Sumbanese, including tour guides, natural trekking guides and ikat cloth-making,” explained Jefry. 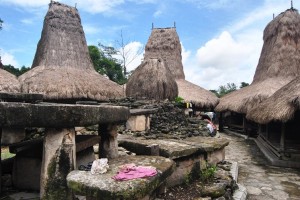 On my second day in Waikabubak, I decided to buy some ikat and visited the traditional villages of Kampung Tarung and Kampung Waitabar, where it is possible to stay overnight for a donation. Amongst the horses and dogs, the villagers peered at me curiously before showing me their traditional wares. I chose a thick fabric with a white horse motif and a family invited me into their home – a stove was burning which they used to make thick coffee. I found the villagers to be open and friendly, but there was also a strain of sadness. They seemed cognisant that their standards of living were ‘poor’ compared to other islands in Indonesia, whereas before they had lived culturally rich lives, full of pride in their bravery as they risked their lives at their festivals – now they were losing their self-esteem. I wanted to see the pasola and find out more about this diminishing culture.

Pasola is an ancient animist festival in which skilled horsemen injure (and infrequently kill) each other with bamboo spears – blood must be spilled to ensure a good harvest.

From Jefry’s house, close to the beach where the pasola festival is held every February, I left at dawn, driving towards the queue of cars and motorbikes that were already waiting to park at the beach. We passed sad-looking locals carrying empty buckets who explained that the nyale worms hadn’t come. “If there is no nyale, there will be rats,” explained Esra as we looked at nearby fragile fields of gold. At the beach, the ratu (shamans) stared melancholically at the sea while waiting for a late shaman in order to start the divination by reading the intestines of a sacrificed chicken.

As the shamans waited, we heard jeers from the other side of the beach – the pasola had already started without their signal. Confused, we ventured towards the men who were already steering their horses into a circle, brandishing their spears. Tensions were high and a drunk man riding a horse tried to stab another participant who ran towards the sand dunes for safety. The crowd dispersed into a cloud of adrenaline and I later discovered that historically, some men with grudges would wait until the pasola for their chance to exact revenge.

That afternoon I headed to Kodi in Western Sumba for the pasola at Kodi Bawa. Staying overnight at a losmen I ventured towards the festival at dawn, but we discovered that worms had not been found there either. Drinking coffee in a makeshift tent was a man with a damaged eye from a pasola injury. He explained that the lack of worms was because of iklim (climate change) and the fish stocks were diminishing too. In Kodi there were fewer tourists, the locals seemed more traditional and many wore ikat – I stuck out like a sore thumb. Some people were drinking alcohol early in the morning as the pasola commenced and I breathed in the crowd’s fumes of kretek smoke. As the spears flew, one man was hit, nearly losing his eye and the circle rippled with cheers.

Resorts in Sumba are essentially selling the ‘wildness’ of Sumba – an inherent spark that has been lost from the CCTV worlds of development. But are the Sumbanese ready for tourism? Anthropologist of Sumbanese culture, Janet Hoskins, feels that the tourist gaze can be seen as threatening or aggressive to the locals, so how can tourism become more responsible in Sumba? 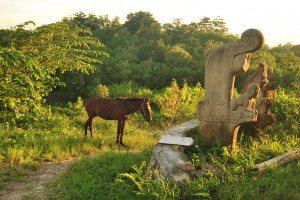 “Tourists can use Sumbanese traditional clothes or attributes, use clothing in a polite manner and not consume alcohol in the arena of pasola,” suggested Jefry. He believes that “preserving the tradition and culture of West Sumba is an essential thing” and tourism is one way to generate income. However, he admits concerns over the “penetration of amoral cultural habits like drugs and alcohol from other cultures to our younger generation.”

If tourists can be respectful, a great relationship could be developed to enable the people of Sumba to develop sustainably and preserve their culture. “People still have a strong belief in these cultural rituals. This was the first time the elders have made a wrong prediction,” said Jefry, who later explained that the harvests of 2014 were prosperous.

Perhaps magic is not stagnant; it must evolve with the times since many new factors have been added to the ecosystem and nature has become more unpredictable. Hopefully the perceptive seers amongst them will continue to penetrate these mysteries and maintain their magical culture.