Examining a map of the world, preferably a globe, one cannot but wonder how a few nations, occupying but a tiny fraction of the world, were able to colonise the rest of the planet, or nearly so. I am talking here about Portugal and Spain, the Netherlands, England, France and Belgium. Germany played a negligible role with only German East Africa (Tanzania) and the present PNG under its control for a limited time. Belgium took a chunk out of Central Africa (now the Democratic Republic of Congo), while France established a presence in Indochine and a few regions in Africa.

The main players were Portugal, Spain, the Netherlands and England. Portugal was first out of the colonising starter blocks pioneering the sea routes to the east rounding the Cape of Good Hope, as well as westward via the Strait of Magellan.

The Dutch followed several decades later. Their main interest (of the Dutch East Indies Company) was to get their hands on part, or all, of the lucrative spice trade, which was controlled by the Portuguese. So, after having obtained the information on the sea routes to the East, Dutch naval power was used to attack the Portuguese strongholds and fortresses on the route to the source of nutmeg, mace and cloves.

Though the strategy was successful and a spice trading monopoly was established, the Dutch soon faced strong competition from England’s growing maritime interests. The rivalry between the two nations led, during the second half of the 17th century, to a number of Anglo-Dutch wars, and culminated, in the early years of the 19th century, in a British take-over of Java and Amboina. The year was 1811 and Thomas Stamford Raffles was appointed as Lieutenant-Governor of Java.

The British interregnum lasted five years only. But because the British, or should I say Raffles’ approach to, and appreciation and understanding of the indigenous populations was so very different from the Dutch colonial attitude, the period stands out as a breath of fresh air. Of course, Raffles came shortly after Daendels had been Governor-General of the East Indies. Daendels had achieved an engineering feat—the construction of the Great Post Road, 1,000 km from the west of Java to Panarukan in the east—within one year and within budget… but at the cost of thousands of lives.

Daendels had been firm with the Javanese rulers (a rather lenient description of his demeanour) and had subjected the population to forced labour. No wonder Raffles was welcomed with open arms.

Raffles was clearly an exceptional person. First and foremost he was a visionary, and together with his wide ranging field of vision, he was approachable, engaging and open to information about the people and cultures of Java and neighbouring regions. But was he a representative sample of the British colonial attitude? In other words, were most of the British colonial administrators of the same hue? An important point as we want to compare the British with the Dutch colonial system. We have seen that Raffles provided a respite from the Dutch rule, but would any of his colleagues and compatriots have done the same? To attempt an answer to that question, let’s have a quick look at the jewel in the British colonial crown: India.

In a similar fashion as the Dutch VOC in Indonesia, it was a trading corporation, the East India Company, which established a presence on the Indian sub-continent in the early 1600s. English traders set up outposts on the Indian coasts, which would eventually become the cities of Bombay, Madras, and Calcutta.

With an apology to those who shudder at generalisations, I will try to describe the British and the Dutch colonial systems with a few wide strokes of my very broad brush.

While starting from the same trading bases, the systems were quite different. Take for instance education. Under the British Raj (reign), in the first half of the 19th century, using tax money, thousands of elementary and secondary schools were opened, as well as the universities of Calcutta, Bombay and Madras. And by 1890 some 60,000 Indians had matriculated, chiefly in the liberal arts or law. About a third entered public administration, and another third became lawyers. The result was a very well educated professional state bureaucracy. By contrast the Dutch established the first technology-orientated university, the Bandung Technological Institute, only in 1920. And as far as primary and secondary education was concerned, only a few privileged Indonesians were accepted into the Hollandse School.

As regards physical infrastructure, India started to build a dense network of railways in the late 19th century, which became the fourth largest in the world. In the Netherlands Indies, the line from Batavia (Jakarta) to Surabaya was completed in 1894. And although eventually the total number of kilometres of railway lines on Java was quite impressive, it did not constitute an integrated network. 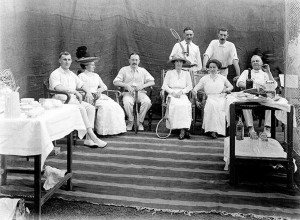 And in the sphere of social life and human interactions one of the main differences between the two systems was that British wives were an official part of colonial life. For Dutch colonial civil servants and also for employees of private companies, rules against the bringing of wives to the colonies were relaxed only after 1870. With the arrival of Dutch wives, the social behaviour of colonial society changed dramatically. Where once the nyai had the status of a common law wife, she now became a concubine and was relegated to the back of the house. By contrast, the British colonists, through the women, built an “Anglo-Indian” society within India, and English customs were adapted to the climate of India.

Another major difference is due to the contrast in scale of the two countries, their economic, social and cultural histories, and the outlook and character of its citizens. Where the English upper class consisted of landed nobility, the Dutch were traders, residing in narrow houses (taxes were levied per metre of house frontage) along the Amsterdam canals. However attractive Amsterdam is as a tourist destination, the canal houses lack the grandeur of the stately homes of London.

This narrowness is also reflected in the Dutch colonial attitude to the indigenous people. Where the Dutch were obsessed with profit making, the British ingrained sense of superiority did make it easier to appear generous to the colonised—by providing education, for instance. And after 1858, the very well organised, well-educated and professional Indian Civil Service was opened to Indians.

This difference in outlook can also be seen in the buildings erected by the two colonisers, the British style more opulent. Compare, for example, Government House in Calcutta with the Palace in Bogor, originally built for the Governor General and now used by the President.

Of course England also had its share of problems and problematic administrators in India. But in general it appears that the British left more behind and were more concerned with the welfare of the local inhabitants than the Dutch. 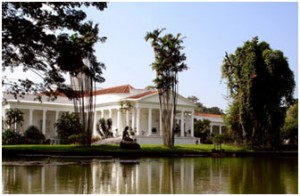 Right, that might well be correct, but what is the implication for the present, the end of 2012. Both countries, Indonesia and India, are developing countries of the mid-income group. Both are confronting the problems caused by a creaking infrastructure, poverty and corruption, in their respective ways. And both have made great progress since obtaining independence from their colonial masters.

Apparently the Daendels and Raffles have, in the long run, not mattered all that much.