When it comes to visiting Jakarta, we only can be sure that we will find a city of contrasts and a lot of garbage, including in the rivers. But you probably don’t know that Jakarta is surrounded by the Citarum River, labelled “the most polluted in the world” by a local commission of government agencies and NGOs. It’s the only water source for 15 million Indonesians and supplies 80 percent of Jakarta’s drinking water.

Like a lot of unexpected and funny things in Indonesia, one of the perfect places to visit with family around Jakarta, close to Purwakarta, is the Jatiluhur Dam, precisely in the Citarum River. We can find fresh air and a lot of tourism facilities, including speedboats for water skiing and a water park, and have picnics or take a traditional boat to visit the water village in the Jatiluhur Lake. In this beautiful scenery, we surrender to a green, yellow and blue landscape.

If we continue along the river course, we can find more colourful landscapes in Bandung, but this time we will stay in the water of the river and in the irrigation channels of the rice fields, beside a black and unproductive land, due to dyes used in 1,500 textile industry factories in the region. Every day, the 269 kilometre-long river is ‘forced’ to receive 400 tonnes of animal waste, 25,000 tonnes of waste bins and 280 tonnes of toxic waste, and has become a vector for disease for the 25 million people in West Java.

As a consequence, for many people living in places like Sukamaju village in Majalaya, Curug Jompong or Cipatik Bridge in Batujajar, a family day used to be not so happy. “Their source of water is the river”, including, “the place where industry is dumping their waste directly”, and they use it to bathe, wash and cook, according to the Greenpeace Southeast Asia Toxic Campaigner, Ahmad Ashov Birry. 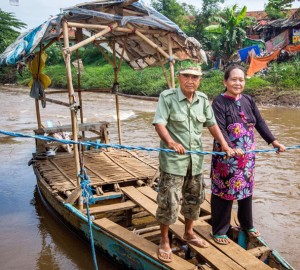 In 2007, when an outbreak happened, “More than 1,000 people were complaining about an itch on their skin and there was no cure. The medicine that has been provided by the local government health agency isn’t effective enough”, the toxic water campaigner said. Some of them seem older, with wrinkled hands and swollen wounds.

Ashov Birry is worried about the long-term effects of the river pollution, with dangerous heavy metals and chemicals. “Not a long time ago, the government of China finally admitted that there is a cancer village related to the industrial pollution problem”, he warned, referring to possible kidney problems, too.

The Citarum used to be clean in the 1970s, before the boom of factories began contaminating it with hazardous waste and consequently destroying local rice production and fishery. Some experts claimed that land will be unproductive for at least 40 years. “What is funny for those farmers, and also for the fishermen, is that they don’t want to use it for themselves, because they are worried”, Ashow Birry stressed.

Greenpeace asks the government for a preventive approach to direct industry to the clean production, substituting the hazardous material, and also a disclosure of the information about the industrial pollution and the metals in the water because with that “the public will also push the industry together with the government”. International fashion brands such as Gap, Banana Republic and Old Navy are linked to this pollution, according to Greenpeace.

The long-term effects of industrial waste in the river will be very expensive to future generations, Ashow Birry warned. He also thinks that, “The law itself is still weak to attack the hazardous chemical problem”.

More than educating people to not put plastic into the river, the toxic water campaigner believes that the government must provide green facilities and good sanitation to the community. “Actually they don’t put the garbage into the river directly, but they put it in the front of their home and some of the government agencies transport it, but they dump it beside the river. When the flood comes, it washes it away and ends up in the river”, he explained. 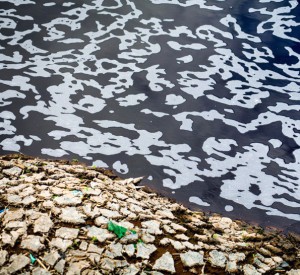 The government considered the rehabilitation of the river a national priority, and in 2009 it launched the Integrated Citarum Water Resources Investment Program (ICWRMIP). Largely financed by the private sector, this huge 15-year project involves dozens of NGOs, six ministries and 12 local governments, amounting to a total of $3.5 billion. The Asian Development Bank (ADB) contributes with $500 million.

Thomas Panella, the ADB’s senior water resources management specialist, who is responsible for the Citarum project, answered by email that, until the end of 2013, they are working to enhance irrigation productivity and to secure Jakarta’s bulk water supply.

The Ministry of Agriculture implemented a program to reduce water use while it increases agricultural productivity and farmer incomes and the Ministry of Health has worked “to develop water supply, sanitation and solid waste management facilities using a community-based approach benefiting over 65,000 people”, he underlined.

The water resources specialist added that this program is working on spatial planning and flood management, among other measures to improve the water quality. However, the environmentalist, Ashow Birry said that he hasn’t seen any improvement with the ICWRMIP. Even the flood problem “is getting bigger”, he underlined.

The State Audit Board analysed the ICWRMIP and concluded that the basin water resources management over the budget period 2009 to 2012 is ineffective. It still found weaknesses in terms of inter-agency coordination and management of water quality and water pollution control, besides six cases of deviations in the administration and 16 cases of internal control weaknesses. Thomas Panella answered that while coordination has shown some improvement, “It would require a strong leadership and continuous effort by all stakeholders involved to be fully effective”, due the complexity of the project. He also defended a better monitoring to deal with the factories.

The Indonesian Textile Association didn’t answer on time to my questions about this issue.

Into and Out of the Comfort Zone