Jakarta is famous for three things: its food, its traffic and its street musicians.

Keribo and his friends Danu and Agay take pride in entertaining bus passengers – they ride anywhere between 40 and 50 different buses a day – choking down the fumes from countless Kopajas and belting out the hits from Indonesian idols like Slank, Iwan Fals and Jamrud. And while you won’t find the trio crooning Frank Sinatra tunes or swanning Bieber’s falsetto, Keribo and his friends happily take requests and know anywhere between 150-200 songs off the top of their heads.

“We get to play for thousands of people every day”, says the 33-year-old guitar player. “We hop on our first bus at around 11 in the afternoon and play until 11 at night. It’s not a cafe gig, but you never know what will happen. Someone might invite you to play their wedding and then someone at that wedding might know someone on a label. You have to believe that miracles happen every day.”

With an outlook like that it’s no wonder that Keribo, with long black hair and a shy smile, loves the freedom that comes with playing the city’s buses. Whether belting out the hits in Bekasi or singing his lungs out in Senen, the life-long artist, who has been busking for the last seven years, is happy with the lifestyle and wouldn’t trade it for anything – except a big-time contract, of course. 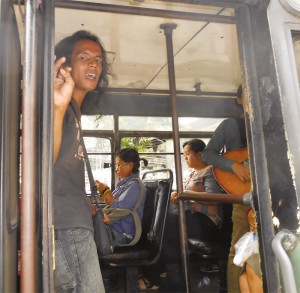 “The bus is our studio”, Keribo says. “We normally start at 7-Eleven in Matraman in East Jakarta, then head down to Blok M and over to Roxy before going to Bekasi or Senen. We make about Rp.150,000 a day, splitting it three ways.

By why work as a trio? Why not play alone and keep all the money for yourself?

“There’s something about working in a trio. We share everything. Also, if we’re lazy, the other person motivates us and we encourage one another.”

But what happens if you are singing your heart out and no one is reaching in their pockets to pull out a few ‘thank you’ Rupiahs?

“People don’t have to pay, some people are happy just to know we’re working”, says Keribo. “We’re like a live radio station. You can change the channel, either get off the bus or ask us to play a song.”

It could be worse. Kopajas are notorious for teams of pickpockets. People who, rather than play the guitar and work for a living, simply rob people trying to get to home in the evenings. “We don’t know Justin Bieber songs. We know Iwan Fals and Slank…if you want we can play Metallica…we know ‘Nothing Else Matters’. Really, if you ask us to play Slank, we’re happy. And if you want to give Rp.500 or Rp.1,000 we consider it a good day.” But they also work security. “A lot of people don’t take Kopaja because of pickpockets. Then there are people who see pickpockets but don’t do anything. It’s sad. I feel like I have to do something. If these guys are making people scared, then no one will ride. I have to stop them.”

Sometimes that means throwing a punch. Other times Keribo simply gives the pickpockets a look that means he knows what they are up to. They normally get off at the next stop, giving up a seat for someone who might have an ear for music, or  someone who has a contact at a record label, who might give Keribo, Danu and Agay the big break they have been looking for.

Could It Happen Here?

Enlightenment from my Chinese Friends