In Britain, the first person who crosses the threshold on New Year’s Day foreshadows what will happen for the year. On the Isle of Man, qualtagh (Manx) was the first foot (the first person or creature one meets leaving the home) of great consequence to the superstitious, particularly women the first time they go out after lying-in.

The qualtagh may also be the first person that enters a house on New Year’s morning. In this case, it is usual to place before the person the best fare the family can afford. It was considered fortunate if the qualtagh were a person (a man being preferred to a woman), of dark complexion, as meeting a person of light complexion at this time, especially if red-headed, would be thought very unlucky. It is curious that the superstition in Scotland is the exact reverse of this – i.e., to meet a light-complexioned person was fortunate. If the qualtagh were spaagagh (splayfooted), it would be considered very unfortunate.

In Vietnam, the New Year is called Tet Nguyen Dan or Tet for short. It begins between January 21st and February 19th and they used to believe that the god travelled on the back of a fish called a carp, and today, they sometimes buy a live carp and then let it go free in a river or pond. Tet is considered everyone’s birthday because everyone becomes one year older at this time.

In Greece, New Year’s Day is also the Festival of Saint Basil. Saint Basil was famous for his kindness, and Greek children leave their shoes by the fire on New Year’s Day with the hope that he will come and fill the shoes with gifts.

In Kerala, southern India, mothers put food, flowers, and little gifts on a special tray. On New Year’s morning, the children have to keep their eyes closed until they have been led to the tray. In central India, orange flags are flown from buildings on New Year’s Day. 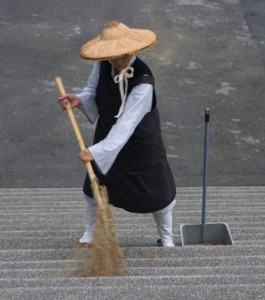 The Chinese New Year is based on the lunar calendar that occurs sometime between mid-January and mid-February and lasts 15 days. They don’t wear black during this holiday. They believe that you should not sweep on New Year’s Day as you will be sweeping away all the wealth and good luck. The first person one meets and the first words heard are significant as to what the fortunes would be for the entire year. It is a lucky sign to see or hear songbirds or red-coloured birds or swallows. It is considered unlucky to greet anyone in their bedroom so that is why everyone, even the sick, should get dressed and sit in the living room. Do not use knives or scissors on New Year’s Day as this may cut off fortune. Red clothing is preferred during this festive occasion. Red is considered a bright, happy colour, sure to bring the wearer a sunny and bright future.

It is believed that appearance and attitude during New Year’s sets the tone for the rest of the year. Children and unmarried friends, as well as close relatives, are given little red envelopes with crisp notes of money inserted for good fortune. The entire house should be cleaned before New Year’s Day. On New Year’s Eve, all cleaning equipment is put away. Sweeping or dusting should not be done on New Year’s Day for fear that good fortune will be swept away. After New Year’s Day, the floors may be swept. Beginning at the door, the dust and rubbish are swept to the middle of the living room, then placed in the corners and not taken or thrown out until the fifth day. At no time should the rubbish in the corners be trampled upon. In sweeping, there is a superstition that if you sweep the dirt out over the threshold, you will sweep one member of the family away.

Iranians jump over fires as part of a purification ritual before the start of their New Year Nouruz, which takes place on the vernal equinox, which falls on April 20th or 21st. One of the features of this thirteen-day celebration is a ritual meal ornamented by seven items that begin with the letter S, including garlic and a wheat pudding; a bowl of goldfish is also on the table. On the last day, it is considered bad luck to stay indoors, so commonly they participate in special picnic events. In Cambodia, April 13th is New Year’s Eve Chaul Chnam Thmey (entering the New Year) and lasts three days. Cambodians clean their houses and home altars to welcome the New Angel, who is the guardian and protector for the New Year. Throwing water at each other is an important feature, a way to bless one another. This elicits laughter, a much sought-after commodity for the future. Sometimes the water is coloured red, pink or yellow to symbolise a colourful future.