The safest time to cross the street in Jakarta can be when the city is at maximum danger level, as Daniel Pope explains.

Most roads in Jakarta are so horrendously congested that being hit by a car simply involves being gently nudged out of its path. But when crossing roads where the traffic does speed freely along, Indonesians use a ‘magic hand’, outstretched at whatever buses or trucks are hurtling toward them, as they step off the curb with the sea-parting confidence of Moses. Astonishingly, they never get hit. It’s as though they’ve slipped into another dimension, the vehicles passing straight through them.

Foreigners, lacking this ability, are advised to cross the streets in Jakarta like a soldier traversing a battlefield. You should dart your eyes in all directions—upwards too because you never know—then dash forward when you see an approaching gap in the traffic, treating vehicles around you as exploding mortar shells. And this is just when the traffic lights are red. At other times you should forget about the road and find a footbridge instead.

Not that pedestrian bridges are entirely safe. I was once mugged on one spanning Jalan Sudirman. Confronted by a small boy brandishing a feeble type of knife, which suggested he was threatening to smear me with butter rather than stab me, I laughed. However, his accomplice was a long-haired, tattooed man with a sickle, which he handled with no small amount of menace. I promptly handed over my wallet. The boy extracted the cash, returned the wallet with a chirpy “Thank you, Mister,” and departed with his cohort.

A policeman subsequently advised me to shout “maling!” (thief) should I ever get mugged again. This would alert passersby to form an angry mob and beat the thieves up.

Like the young thief on the footbridge, most Indonesians address foreigners as ‘Mister’. Usually it is in the form of “Hello, Mister,” which means just that, or “Mau ke mana, Mister?” which means “Where are you going?”and is not intended to be intrusive. So I was surprised when I visited the small town of Rumbai in Sumatra’s Riau province, where the most popular greeting from local youths, usually aboard passing motorcycles, was “F–k you, Mister!” 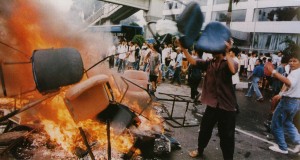 The explanation may be that Rumbai is dominated by the American oil giant Chevron, for which many but not all locals work, creating a division of wealth in the community. Expatriate employees might be viewed by the town’s less well-off as capitalist overlords, deserving of a good expletive or two learnt from the abundance of Hollywood action movies sold on cheap, pirated DVDs around the city.

I never got mugged in Riau but my hotel room did get burgled. Returning one afternoon from an errand, I spotted the thief exiting my door, and I hurried after him down the stairs. Did I take the policeman’s advice and shout ‘maling’? Oddly not. I was afflicted by a momentary sort of speechlessness. I shouted, “Oi!” Yes, that’s right. “Oi, you! Oi!” as though my toe was being trodden on.

The Indonesian hotel guests milling around the foot of the stairs, perhaps fearing that ‘Oi!’ was English for kebakaran (fire), or some other such urgent warning, moved toward the exits. Meanwhile the thief, who had fled the hotel unchallenged, hopped onto the back of a waiting accomplice’s motorcycle, and off they sped, along with my laptop.

I jumped into a taxi and instructed the driver to give chase. However, this driver—and I’m not kidding here—suffered from an acute nervous twitch that, in more regulated societies, would have disqualified him from driving. Every minute or so, his left arm—as if controlled by clockwork—involuntarily yanked the steering wheel downward, as his back heaved and he exhaled a plaintive utterance, while the vehicle lurched off-course. Each time this happened he’d swivel around to me, grinning, “Sorry, Mister.”

At a normal speed, he could pass as just another erratic driver, but I was pushing him hard. Eventually one of his more violent spasms caused the car to glance the central barrier. Had we been going any faster the taxi might have overturned. I was lucky. But being flung across the rear seat by the collision gave me a frightening hint of just how bone-shattering would be the impact of a full-on car crash. I became a rear seat-belt convert after that.

By far the greatest danger I’ve ever felt myself in came on May 14, 1998, which would become infamous as the day that lawlessness gripped much of Jakarta and rioters took control. The riots were partly triggered by the Asian financial crisis, which caused the rupiah to crash, wiping out people’s savings and resulting in mass lay-offs.

I woke up at home in Central Jakarta to the sight of white smoke drifting past my window. At first I thought there must be more sate sellers than usual parked down the street. Then a friend phoned to say he was on the roof of his office watching a shopping mall burning down. Later we heard that nine people died in that mall, indicating there was no coordination between the arsonists and the looters. This was the story across much of the city, where provocateurs had incited people to loot – and then set fire to the malls while the looters were still inside.

At the end of my street a procession of over laden vehicles—motorbikes, bajaj, cars, vans, trucks—pluttered back from parts of the city where looting was rampant. One bajaj looked as if its roof might collapse under the teetering stack of brand new, boxed home appliances lashed to it. There was a chest freezer, a washing machine, a cabinet TV – expensive items for this downmarket neighbourhood.

We heard that few shops remained intact. In the coming weeks, former staff would be protesting outside some of those bare-shelved buildings, holding placards reading: “Enjoy your plunder now – later rot in Hell.”

Not a police officer was to be seen anywhere during the riots.

Palls of black smoke rising behind the houses gave the city an apocalyptic backdrop.

Ignoring warnings that I risked being kidnapped or robbed—Jakarta’s unfortunate ethnic Chinese population was the target of the malevolence—I perched on a motorcycle taxi that threaded though streets where people clustered like zombies among litter and rubble. I was looking for refuge, somewhere I might find safety in numbers and security guards. I stayed in a hotel for the night. Many people had no such luck. More than 1,000 perished, mostly in mall fires; while scores of ethnic Chinese women were mass-raped. The masterminds have never been brought to justice.

Next day, the streets really had become a military battlefield. The authorities had regained control of most of the city by midday, and Army vehicles were patrolling the streets. Nearly everything on wheels was khaki-coloured and projecting guns. Tanks were rolling along Jalan Sudirman, Jakarta’s main business thoroughfare. Elsewhere, there was almost zero traffic and few people to be seen.

The riots were completely extinguished by evening, though much political and social turmoil lay ahead for Jakarta and the country. But for one day at least, crossing the road had never been simpler or safer.

Lost in the Supermarket