I came across Deskom and his best mate, Aris one hot morning on Mampang Prapatan, South Jakarta, as they were wandering amongst the traffic in search of a few Rupiah. Deskom was strumming on his miniature guitar and Aris was singing away to try and catch the motorists’ attention. 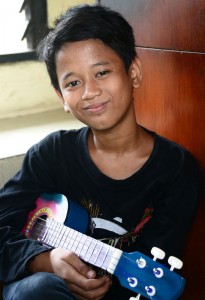 Their story is one of sadness and hope.

Deskom (15 years old) struck me as a lovely boy with a quiet nature and a strong determination. He is very loyal to his friends and family. He comes from a family of five – two brothers and two sisters, aged between three and 14 years. His mother does not earn much money as a maid for a local Javanese family and his father sells petrol to motorcyclists in front of his home, so that he can look after the three year old.

Deskom is determined to go to school, so every morning between 7 and 11 am he plays guitar to passing motorists. His goal is to earn Rp.40,000 – 50,000 which pays for school books and clothes and anything left over goes to support his parents. He goes to school at 11am and finishes at 6pm, at which point he meets up with Aris and they spend a couple more hours hoping to drum up a few more Rupiah from the commuters as they make their way home in the heavy traffic.

Aris, who is two years younger than his faithful friend, is a very shy boy, lacking in confidence and very much lives in the shadow of Deskom. His mother passed away from bronchitis when he was four years old and he now lives with his father and stepmother. He cannot go to school as he cannot afford the uniforms and books and must stay at home to look after his twin sister and two brothers. So, if you happen to be driving down Mampang and see these two teenage boys at the lights, one with a guitar and one singing, put a few Rupiah their way, it will go to a good cause.