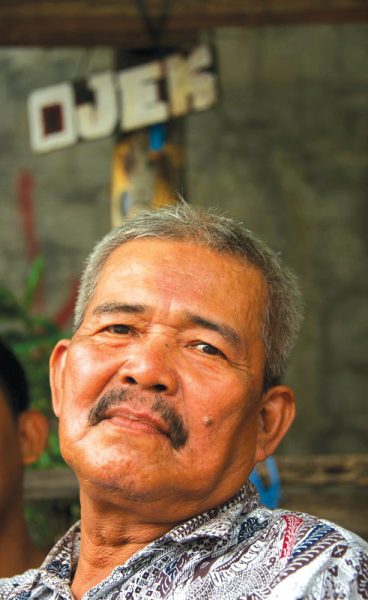 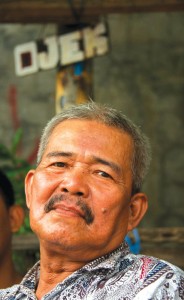 Aseni was a Metro Mini driver for twelve years before deciding to become a motorbike taxi (ojek) driver. Ten years later he is quite content to battle the Jakarta macet to get his passengers to their various destinations on time and in one piece, which is not easy in the Big Durian.

Aseni seemed very relaxed when I spoke to him outside Hero in Kemang and did not seem too concerned that there was no one in need of his services whilst I spoke to him. He is literally one of the thousands of ojek drivers in Jakarta in what is clearly a competitive business. You don’t need a license to be an ojek driver, so it appeals to those who want to freelance and work for themselves, which was the best thing about the job for Aseni.

His days are long though, starting most mornings at 6.30 am and not finishing until around 5 or 6 pm before making the twenty kilometre journey home. He does this six days a week and earns around Rp.60,000 a day on average. 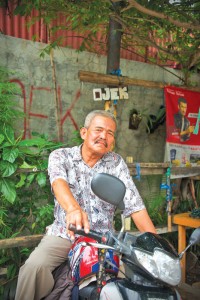 Aseni was born in Jakarta and supports two daughters, one in high school and one that has recently graduated. I think one of the most amazing things about Aseni is that after 10 years of zipping around the streets of Jakarta he has never had an accident. He very rarely picks up foreigners but has some loyal clients that use him regularly.

As is often the case in Jakarta, Aseni makes the most out of the situation and is very happy the more cars and traffic jams there are, as it means more demand for his service as people crawl along in the traffic taking 10 times longer than Aseni to get to their destination.

Ojek riders are part of the lifeblood of Jakarta and play their part in helping the city function in its very own way, unlike anywhere else in the world.