It is said that in life only two things are certain: death and taxes. But if you live in Jakarta, you can add two more to that list: macet and banjir.

Government officials come and go, and it seems like none of them can keep floods out of Jakarta. Even award-winning Governor Joko “Jokowi” Widodo–who visits the capital’s problematic areas on a daily basis and demonstrates considerable effort to “fix Jakarta”–was quoted saying to the press, “(Solving) banjir and macet takes process, so don’t expect me to fix it like a god turning his hand. Even the gods can’t [solve Jakarta’s floods and traffic jams].”

It is rather unfortunate that Jokowi’s 100th day evaluation fell on January 22, right in the middle of last month’s major floods. But I don’t blame Jokowi.

Nevertheless, Jakarta’s flooding remains a serious perpetual concern. Some areas in Jakarta, according to urban planner and director of RuJak.org Marco Kusumawijaya, are confirmed to sink at an alarming rate of 18 centimetres per year (that’s a tall person’s height per decade!), mostly due to deep well groundwater usage and urban development.

Many people, fatigued with Jakarta’s less-than-stellar water management, like to romanticise about the “good-old-days” under the Dutch rule when the old canals were well maintained and Batavia was known as “Paris of the East”. But not many people know that Batavia has been flooded since 1665.

Batavia was established in 1619 by the Dutch East India Company. According to historian Bondan Kanumoyoso, who authored a book on 17th-18th century socioeconomic development in Batavia, the settlement now known as Jakarta’s Old City was never meant to be a proper city, but rather as the company’s Southeast Asian hub for the spice trade. Ecological considerations were the least of the Company’s concern.

The settlement was healthy for the first thirty years, until Batavia was attacked by Mataram (present-day Yogyakarta Sultanate), thus prompting the Dutch to end their isolation and start developing new settlements along the riverbanks of Ciliwung. Sugarcane plantations burgeoned down south, and migrant workers from outside Java were brought in, causing deforestation and subsequently flooding.

“But flooding in the rainy season is only half of the problem. In the dry season there’s drought, which causes muddy waters to stagnate in the canals and become breeding grounds for disease vectors like malaria-bearing mosquitos,” said Bondan. “In addition to preventing floods, there’s also the challenge of making sure that there’s the right amount of water flowing in the dry season.”

Batavia’s canals were commissioned in the early 17th century by Jan-Pieterszoon Coen, a Company official who studied in Venice and wanted a similar waterway transportation system in the hub. Batavia’s canals would later inspire the infamous canals of Amsterdam.

However, some of Batavia’s canals had to be converted into roads when waters carrying sedimentation from Mount Salak’s eruption stagnated. Other canals were subsequently built over the coming centuries, like the Molenvliet in Jl. Hayam Wuruk-Gajah Mada, the Mookervaart in Jl. Daan Mogot, Kanal Banjir Barat, and Kanal Banjir Timur. But the floods keep on coming.

Marco Kusumawijaya referred to Restu Gunawan’s book Gagalnya Sistem Kanal (“The Failure of the Canal System”), which explains the history of flood control in 20th century Batavia and problems Dutch canals cannot solve. Canals ultimately fail because once bigger ones are installed, it encourages development, which only exacerbates the root causes of flooding.

Marco’s mathematical formula for floods is:

F being “Flood”, SR being “Surface Runoff”, Q1 being natural drainages like rivers and lakes, and Q2 being manmade channels.

Most of the time, people attempt to control floods by maximising Q2: canals, dams, reservoirs. Such projects are often commissioned to private companies, thus making them economically and politically beneficial.

“But increasing Q2 without reducing SR is like putting a bigger glass under a tap of running water. Sure, it holds more water, but unless the tap is turned off, the glass would still eventually overflow no matter how big it is,” said Marco. 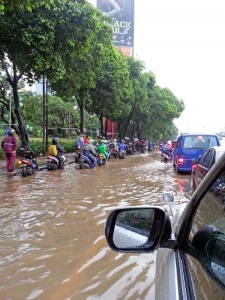 Jakarta already has a great amount of natural SR from rainfall and excess waters from West Java’s highlands alone. And then there’s the additional runoff from population growth, developments that take away surfaces for groundwater absorption, and sewage produced by human settlements and industries–some which draw deep groundwater but can’t put it back into the ground.

Efforts to curb SR include reforestation and groundwater recharging through infiltration wells. “They’re not politically ‘sexy’ because they require decentralisation and the empowerment of the people,” said Marco.

“Q2 measures tend to be more popular because they put money into infrastructure, thus giving the impression of modernisation. In comparison, SR measures tend to give the impression of curtailing development.” Reforestation, for instance, may require spending tax money to buy hectares of rainforest and simply conserve them, without developing any moneymaking investments on the expensive land.

In order to encourage SR measures, Marco said that it is important for the public to assure the government and businesses that it is acceptable to invest in them. “The sustainable way is always a challenge, but technology makes it possible. It’s just not well-embedded in the system yet,” said Marco. These technologies include permeable drainage to absorb the runoff, plants that act as natural water cleaners and absorbers, biopores, and “green roofs” that retain water.

“This is because our government and our people still lack a scientific mentality,” said Marco. “In order for it to stop, damages must be clearly calculable, and there needs to be legal procedures to punish offenders. Sure, this will increase development costs and reduce profits, but it also disciplines the market by forcing it to become more efficient. Businesses need to start including SR measures as part of their normal business costs. It only costs a few million Rupiahs.”

“In order for Jakarta to have zero flooding, there needs to be zero corruption,” he added. “Sustainability is the only way to go if we want to survive. First we must believe that we need to survive and that we have the technology to make it possible.”

RuJak (“Ruang Jakarta”) is a non-profit organisation devoted to exchange ideas and commit to actions that transform Jakarta into a better, sustainable city. The RuJak website is regularly updated with entries on urban planning and architecture, and announces upcoming public discussions.