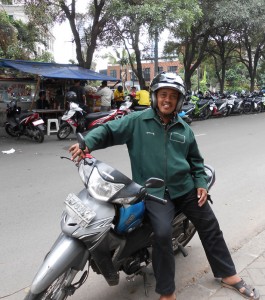 No one loves Jakarta’s traffic as much as Trisno. It’s his bread and butter. His clients leave the office at the end of the day, their briefcases swinging in the breeze, take one look at the gridlock and wave him over. As an ojek driver he has everything you need to run a successful business: supply, the 20-some-odd million people who commute to and from Jakarta every day; and demand, people who would rather pay a little extra to get home in 40 minutes, instead of hail a taxi and sit in traffic for two hours. Who says you need to go to business school?

Trisno never finished high school, let alone got his MBA, so he is determined to do whatever it takes to make sure his daughter does. Trisno left his village in east Java more than two decades ago to try his hand in the big city, landing a job at the port in Tanjung Priok not long after he arrived in the Big Durian. Every day he would process the necessary papers to get ships in and out of the port, but around nine years ago, as things progressed and everything started being done on computers, Trisno became obsolete. Without a high school degree he had nowhere to turn to.

Without really thinking about it he became an ojek driver. He had a wife and kid at home. He didn’t have time to explore the job market. His wife needed money so she could cook dinner for the family and his daughter needed money to pay for school and a new uniform.

He jumped on a bike and never looked back.

But here’s where Trisno’s story gets interesting. He’s addicted to working. He doesn’t sit in the shade and smoke cigarettes all day. He’s up at dawn seven days a week and if he’s not zigging and zagging through traffic getting passengers home to their wives and kids, or making sure guys in ties don’t miss big meetings, he’s trading and selling in motorcycle spare parts. 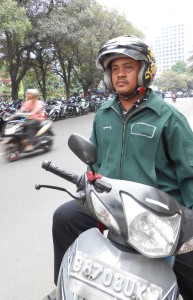 “My daughter is not going to miss out on an education,” says Trisno. “I do what I have to do to find money to put her through school. That is my responsibility as a father. She’s in 11th grade now, just one more year and she’ll be in university.” That’s right, university.

Gun to his head, Trisno has no idea how he will pay for it, but his determination knows no bounds. He’ll figure it out. Right now he pays roughly Rp.300,000 a month for his daughter to go to school. When she heads off to college that number will likely quadruple. But whether he has to sell a million new brake pads to his fellow ojek drivers, or he has to scoop up customers day and night to make it happen, Trisno could care less. He plays by his own rules.

He could spend the days playing chess and pulling up his shirt to rub his belly, but he’d rather be out racing around town, scooping up clients and cash. All the while knowing that some nights he may not get home until after his daughter has fallen asleep. She’ll never have to worry like he did in high school, if there will be enough money for her to graduate. The next morning he’ll be gone by the time she’s had breakfast, but he’s OK with that. It’s what he has to do to ensure his daughter gets the education he never did.

If you would like to help Pak Trisno, please get in touch by emailing [email protected]

Swim and Sway Those Kilos Away