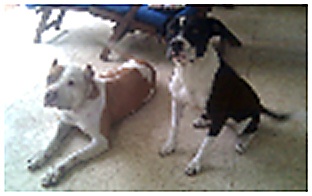 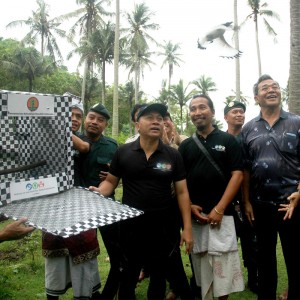 A pair of critically endangered Bali starlings (Jalak Bali), from the West Bali National Park, have been set free on Friends of the National Parks Foundation’s (FNPF) bird sanctuary on Nusa Penida island on 30 December 2013.

“Indonesia’s Minister of Forestry, Zulkifli Hasan, released the birds in a special ceremony near our conservation centre,” says FNPF Founder and CEO Dr. I Gede Nyoman Bayu Wirayudha. “We’re very excited – these birds will bring a new bloodline to the more than 100 Bali starlings already living in the wild within island sanctuary.”

FNPF is an Indonesian non-profit organization working to protect wildlife and its habitat, at the same time as supporting local communities.

“FNPF has been providing technical support and advice to West Bali National Park for its Bali starling conservation program for more than 10 years. It’s fantastic to have the opportunity to introduce into our sanctuary a new bloodline from the leading government institution working to save this precious endemic bird,” says Dr. Wirayudha.

The sanctuary, the only one of its kind in Indonesia, provides an unofficial haven for endangered birds. Within the sanctuary, just off the coast of mainland Bali, FNPF rehabilitates and releases ex-captive birds, is involved in reforestation and community development.

The project has the backing of the islands’ 46 villages. Indonesia has the world’s second highest number of endangered birds, and the Bali starling is one of world’s most endangered birds.

The sanctuary also has the backing of the Bali Bureau of Natural Resources Conservation Agency (BKSDA), which recently sponsored the installation of four bird nest boxes into trees on the island, as well as donating seeds and polybags for FNPF’s nursery.

FNPF’s conservation projects, which respect the interdependence of wildlife, habitat and local people, are designed to be holistic, sustainable and have been internationally recognized by organizations such as the Whitley Fund for Nature, and the Rainforest Action Network.

FNPF relies solely on the generous support of their donors and volunteers to continue its work. To make a donation visit their website at www.fnpf.org. FNPF thanks its donors, such as the Humane Society International (Australia), who have supported its work on Nusa Penida.

Run for Fun, Run for the Kids