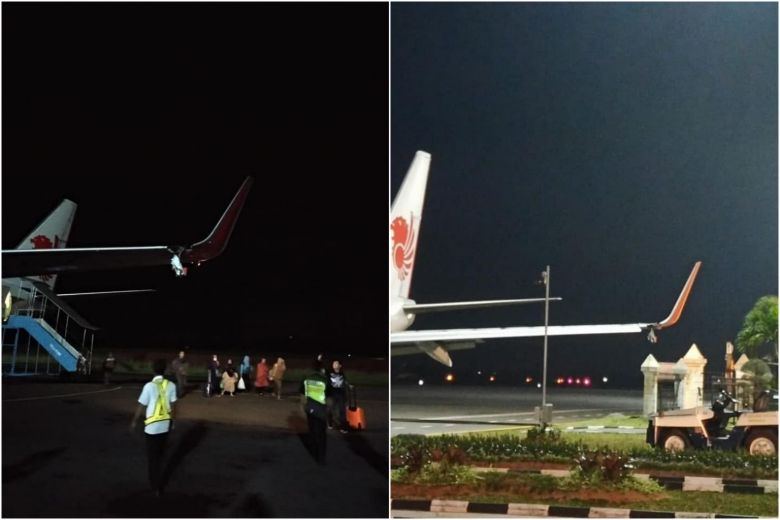 A Lion Air plane has smashed into an lamp post before take-off just a week after one of the airline’s jets crashed in Indonesia killing 189 people.

The Boeing 737-900 plane was on its way to the runway at Fatmawati airport in Bengkulu, Indonesia, when its left wing collided with a metal post.

The collision on Wednesday evening damaged the wing, leaving a fragment dangling in the air, forcing those on board back to the airport.

The passengers on the JT-633 flight to Jakarta were moved to a second plane and arrived four hours late at 11.50pm.

An Indonesian official said the plane and pilots have been grounded while the crash is investigated.

‘The aircraft nudged the pole while travelling to the runway,’ said Pramintohadi Sukarno of the Ministry of Transportation.

‘We have instructed Kabandara to ensure that airlines fulfil their obligations in accordance with the provisions by providing compensation for late flights to passengers.’

Lion Air has apologised to customers, saying: ‘The Boeing 737-900ER registered PK-LGY which was due to take off at 18.20 from Bengkulu, the departure was cancelled.

‘When the plane was moving towards the runway, the wingtips knocked over the airport’s parking lot pole, which broke.

‘The aircraft was controlled by a pilot with guidance and instructions as well as signs given by Aircraft Movement Control (AMC) officers.

‘The AMC officer is a person from the airport management and is being examined by the relevant party.

‘The aircraft took off at 22.48 West Indonesia Time from Bengkulu and landed at Soekarno–Hatta International Airport at 23:50.’

The Lion Air jet in the fatal crash crashed just minutes after take-off from Jakarta on Monday, October 29, killing all 189 people on board.

Indonesia’s search and rescue agency on Wednesday extended the search effort for a second time, saying it will continue until Sunday.

Body parts are still being recovered and searchers continue to hunt for the cockpit voice recorder.