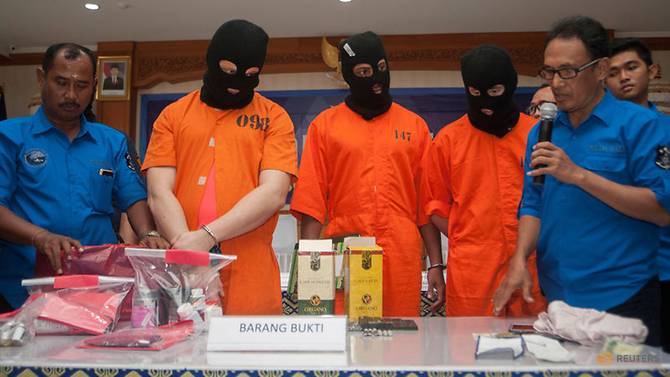 An Australian, an American and a Malaysian have been arrested in Bali in the last couple of months for separate drugs cases, as Indonesia continues its firm crackdown on narcotics. The suspects were brought to appear at a press briefing wearing orange prison garb and balaclava to hide their faces, surrounded by police officers.

In the latest of the three cases, police arrested the Australian upon his arrival from Bangkok after discovering methamphetamine and ecstasy hidden in a plastic bottle and another container in his luggage.

“Based on the results of the inspection, our officers found five packages containing clear crystals weighing 19.97 grams and 14 tablets weighing a total of 6.22 grams,” Bali Airport customs office chief Himawan Indrajono said in the statement, as quoted by Reuters.

Both the American and Malaysian were arrested last month. On November 30, the American suspect was detained for his involvement in the delivery of a package from the US containing 336.6 grams of e-cigarette liquid containing THC also known as tetrahydrocannabinol, the active ingredient in cannabis. The Malaysian was arrested on November 8 for after being found with 3.03 grams of leaves thought to be marijuana and 0.65 grams of a white powder suspected to be narcotics.

Possession of drugs in Indonesia, which claims to be facing a drug crisis with an estimated 6.4 million drug users, can lead to the death penalty. However, according to the Reuters report, it was not immediately clear if any of the three would face capital punishment.

Under the leadership of President Joko Widodo, Indonesia has executed 18 people–15 of them foreigners–for drug trafficking, while a number of other convicts are currently still on death row.