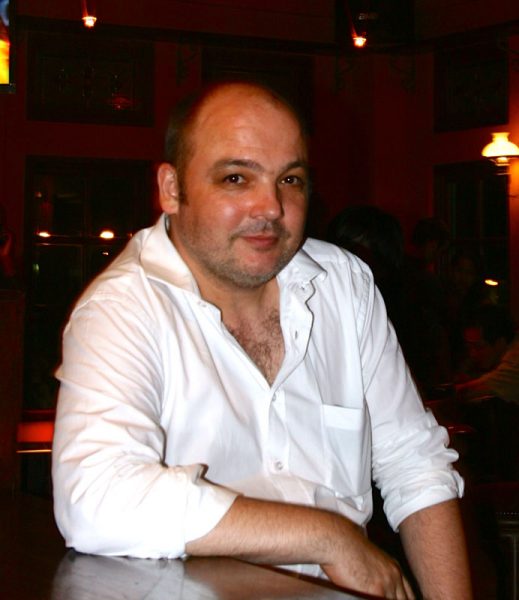 Meet Stefan Thiele. The German Born Jazz Musician and General Manager of Double Doors – One of the Few Venues in Jakarta that Hosts Jazz Nights. 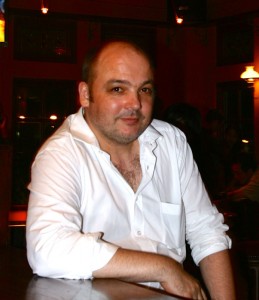 So Stefan, what brought you over here to Jakarta?

Back in 2000 I travelled to Indonesia and fell in love with this country. A few years later I came here with a band from The Netherlands for a performance at the annual Queen’s Birthday Celebration of the Dutch community. What was planned as a short trip became three years in Jakarta. After that I went on to Singapore and Australia before I returned to Germany. After two years of being back home, I got the opportunity to open Double Doors, a new place for live music entertainment in West Jakarta.

And where do you come from? Where did you grow up?

I grew up in a small town in the western part of Germany, Bad Lippspringe. It’s close to Bielefeld, in the middle of the country. It’s quite nice, with a lot of nature around.

I hear you’re a Jazz musician and have toured internationally with some well-known musicians from Europe. What was the experience like?

Touring is great, you get the chance to see new places you normally wouldn’t see and meet people you wouldn’t normally meet. And people come to the show because they love to see and hear you performing. You have many girls in different cities and do things that are not allowed…

That’s what many people think when they hear about touring. The reality is quite different. It’s also tiring. First of all, you sleep most nights in a different hotel and bed. The daily routine is: Breakfast until you have to check out of your hotel room, hitting the road, driving to the location of the next show, check in the next hotel, sound check at the venue, dinner, and then the show. After the show you meet some people/fans, then back to the hotel, straight to bed or to the hotel bar for a last drink. Next day is the same, and after that again the same. It’s not as exotic as most people think. But of course there are great moments as well, when you meet famous people or visit special places. But the most important thing is that you get along with the crew and your fellow musicians, because they are the people you deal with every day. They become your family for the time being.

Why Jazz? What drew you to this genre in particular?

I got in touch with jazz around the age of 17. I heard an Oscar Peterson recording on the radio, the title was ‘Nigerian Marketplace’. I recorded it on my cassette recorder and played it over and over again in order to figure out what this man was playing. Nowadays young musicians have it much easier. They just search the internet to find the right chart, even finding instructional videos for a particular song on YouTube.

Soon after that I started playing in bands and one of the bands was a jazz big band. In 1984 we went to a concert of the legendary Miles Davis and until now that concert is still among the best I have ever seen. From that moment my musical direction was clear. 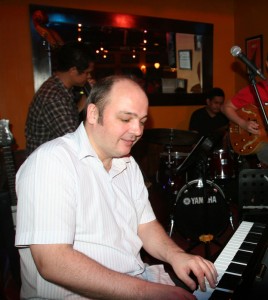 So how many instruments can you play and where did you study music?

Actively, only piano. But I played a lot of instruments during the years. I started playing accordion at the age of eight. When I was 13 I started playing trumpet and drums. Piano came quite late into my life when I was already 15. But as soon as I started playing it, it became very clear that it would be my main instrument. I also play a bit of guitar and had a rock band where I played bass guitar, but that was only a short intermezzo.

When I was about to graduate from high school, my classmate and fellow musician asked me to join him to go to Hilversum in the Netherlands. There was a famous conservatory of music for jazz. We went there for the entry level examination and I passed the test. In the first year we were about 100 young ambitious jazz musicians from different countries, all eager to learn more about jazz and music. Every night we had jam sessions, talked about music, listened together, analyzed music. Just like the American movie/series ‘Fame’, but only focused on jazz, incredible….

Do you still perform? Will you be joining the Java Jazz lineup this year?

Yes, I still perform. Right now, not as much as I used to, but in my opinion a musician who doesn’t perform is like a fish without water. About Java Jazz, I don’t know yet. Check the Line-up for West Beat, that’s the name of my current band

Defining Jazz can be a controversial issue, with some purists – like Wynton Marsalis – believing Jazz is “Blues and Swing” whilst others see a broader definition. Where do you stand?

I’m not a purist, I see jazz and music in general – very broad. For me the main ingredients of jazz are improvisation and interaction. That doesn’t mean there are no rules and everything goes. Most music, including jazz, needs framework. It also makes it easier consuming for the listener. But then again, rules are meant to be broken!

What are your thoughts on the local Jazz scene? In your opinion, who are the most notable Jazz musicians in Indonesia?

Indonesia has a very lively jazz scene with a lot of amazing talent around. A while ago I met Joey, a nine year old boy who plays jazz like he’s done it for 30 years. Over the last few years a lot of jazz festivals have been organized in all parts of Indonesia. In my personal opinion the variety of jazz in Indonesia could be more extreme. A bit less smooth jazz mainstream and a bit more of some edgy something else would spice up the scene. You are also the General Manager of one of the few venues that hosts Jazz nights here in Jakarta. Where is it located and how often do you have Jazz performances?

Double Doors Bar & Restaurant is located in Puri Indah, West Jakarta, opposite RS Puri Indah, in the ruko next to Puri Mall. As far as I know it’s the only venue with (almost) fulltime live music entertainment in the area. Every Wednesday night we have Purijazz – the only jazz night in West Jakarta. I play with my current band, West Beat, which is Donny Sunjoyo on bass, Sandy Winarta on drums and Nesia Ardi, probably the most talented Indonesian jazz singer. I also host the jam session, the second part of Purijazz night, where I bring young and senior musicians together on stage, an approved formula for good music and good fun.

The other nights of the week feature different genres of music, but Double Doors always stands for ‘live on stage’.

Double Doors is also a place for good food and drinks. These days we are finalizing our new menu. On Sundays many people come to watch big sports events on the big screen. There are many reasons to come to DD!

Jakarta can be described as a city of extremes, what are your loves and hates when it comes to life in the Big Durian?

Macet, banjir, mati lampu…Those are the first things that come up when you ask that question. There are many things to complain about in this city. But just like so many other expats here, I keep on coming back. There is something magical about Jakarta which is unexplainable. Maybe one day someone might be able to reveal the mystery of Jakarta.

Thank you Stefan! If you’d like to get in touch email [email protected]