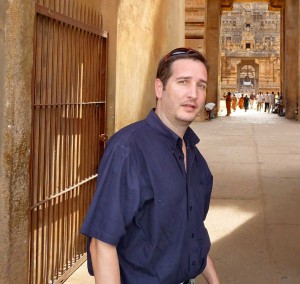 So Mark, what were you doing before you started Equinox Publishing?

I started working in Switzerland after college with a bank and they moved me around a few times from Zurich to Hong Kong, back to Zurich and then finally here in Jakarta in March 1997. You know – young, dumb and full of…ummm…energy – so I thought it was great. When I left the bank a year later I wanted to stay in Indonesia (it was a fascinating time) but wasn’t keen on starting a new job. I was the editor of my high school yearbook and for some reason I thought that qualified me to write a book (it didn’t). I spent a year and a half researching and writing and in March 2000 we published Kretek: The Culture and Heritage of Indonesia’s Clove Cigarettes.

What prompted you to go into publishing, and what were the initial challenges?

I was in a fortunate position that I didn’t need (or want) to pitch my book to a publisher so I set up a company to do it myself. I didn’t have any intention of getting into the book business with the exception of this one book. After the book was published I discovered I wasn’t such a great writer after all but did like the business of book publishing. The book market in Indonesia was just taking off in 2000 and I was lucky to ride that wave. And 12 years later we’re going strong. 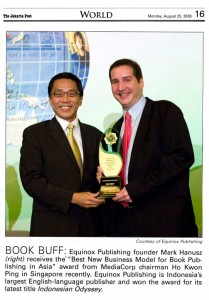 What types of books does Equinox publish, and how many titles do you currently print?

We have over 100 books in print and we focus on historical non-fiction. The range is pretty extensive though, basically everything besides cook books, children’s books and poetry.

As a publisher, what do you look for in a submission?

I look for manuscripts that I would like to read myself. I seldom try to figure out what the market wants as I am not sure they even know. I like to see manuscripts that are organized and polished – it makes reviewing them much easier and shows the writer actually cares about his work.

What would you say makes Equinox different from other publishers?

Being an English-language publisher in Indonesia is, by definition, a niche market inside another niche market. There aren’t many publishers that do what we do so I am not too concerned about competition. We tried publishing some Indonesian-language books in the past but simply couldn’t compete with the other 1000 or so publishers on content, editing and price. Interestingly, I recall asking a local-language publisher how they price their books, and he told me they look at the cost to photocopy it and add a small premium. That’s when I decided I should really focus on English-language books. Who’s your favourite author, and why?

For non-Indonesian writers it’s a toss up between Ayn Rand and Milan Kundera. Both authors have deeply influenced me in my younger years, and continue to do so even today. Among local authors, it would have to be Pramoedya Ananta Toer. I was privileged to get to know him quite well before he died, and was always humbled by the humanity in his character and writing.

When you’re not busy with work, how do you usually spend your free time?

I’m blessed with a wonderful, energetic 4-year old boy and try to spend as much time with him as possible.

Having lived in Jakarta for quite a while, what would you say are the best things about life here in the big durian?

Jakarta has a very steep learning curve. I don’t know many people who move here and immediately feel at home – especially if you have a family. Once you get used to it, though, you can begin to appreciate some of the charms – the biggest one for me is being able to do just about anything you want. I tend to think of the rules or laws in Jakarta are more like guidelines or “best practices” and am always amazed how many different ways you can get things done here. The problem is it just takes a while to figure these things out.

Last question! If you were to be stranded on a desert island indefinitely with only one book to read over and over, what would it be?

Without a doubt it would be Bule Gila: Tales of a Dutch Barman in Jakarta. I forget the name of the author though.