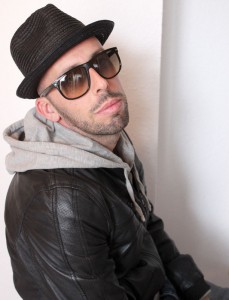 Where are you from?
I was born and raised in Tenerife, Canary Islands (Spain). I grew up on a small island which is also a tourist destination.

How did you become a DJ?
I started when I was twelve, thirteen years old. My sister had a tape deck and I would sneak into her room and play Phil Collins, Madonna, Spandau Ballet and do my little mixes from that and the radio, too. At that time my first love was skateboarding. I dreamed of being a professional skateboarder but I broke my foot. So when I was recovering I focused more on the music thing. I got a turntable and cassette and started to do my mixes. When I tried to go back to skateboarding my foot gave me so much pain I realized I couldn’t continue.

What were your first gigs?
When I was fourteen I started playing at birthday parties, and people were always asking for my mixed music tapes. Then I started going three times a year to London for 10 days to three months to buy the records and clothes which I brought home to sell. Then I started to play the big parties, which I thought could be better. I started to promote my own parties, then with two other DJs called Funk Squad. It was very successful. We were famous in Spain. Funk Squad had parties of 3,500 people with alternative music featuring Rhythm and Blues, Hip-Hop, and Classics. We started in ’95, and from 1997-2005 we did parties, festivals and radio shows. For 20 years I have been a DJ. Music is my first love, it really impacts me in a way nothing else does. As a DJ, music takes care of me. It allows me to travel and live my dream. I do what I love in places I love.

That’s called success! Tell me about your radio hosting.
I started to do radio shows because I’m interested in sharing music. I hosted shows that played a mix that some people hadn’t heard that much, because most radio only plays the top forty hits. I hosted radio shows for fifteen years and online radio towards the end of my radio days. I did collaborations with the most important FM station in Spain; Los Cuarenta Principales. I enjoyed the radio work even more than being a DJ because I played music I really loved. All the music did not have to be for dancing; I could be generous and impact the listeners with other types of music I loved to play. It was a compliment when listeners would approach me and thank me for introducing them to a singer or group which my show had introduced to them.

What type of music do you love and play?
The music I love most is all related to forms of black music. My favourite music is not from this era. I play disco, funk, R&B, and hip-hop. Electronic music is okay but it doesn’t move me like the music of the 60s, 70s and 80s. Usually the rhythm tracks are from those classics. In those days I think ninety percent of musicians were really true artists. It is the music I respect the most. Nowadays, a guy on a PC can make a song. Maybe he can transfer his feelings but it’s not the same. I think ninety percent of the people pumping out music today are not total artists. Only about ten percent of the music is made by real artists these days. Most music is put out by the music industry for a huge market. It is a product for a huge market. The industry thinks it is cheaper to take a new guy and put the money into marketing and promotion. When people make music nowadays they invest in computerized equipment and advertising and social networking. Now the music business is making more business and less music. Back in the day, before my time, it was more music and less business. Music was more organic. A few musicians would get together and put out great new sounds that are classics today. They worked hard to make it. These musicians are still a huge influence. I say I have one mother and one father in music. My Father is Curtis Mayfield and my Mother is Sade! I remember clearly the first time I heard Curtis Mayfield. His music transports me to another kind of life. No other artist affects me as strongly as him. There is still good music and great musicians but the focus has changed. There is a lot from the old days which deserves to be played. What moves me the most is when people actually play instruments in a group. Music nowadays is like fast food. I call it fast music; made fast with a lot of sugar, not really healthy, not connected to your soul. Even the lyrics nowadays don’t say much. When hip-hop started it addressed social issues. It was a movement. Now it is all about Bentleys, designer clothes, huge estates. It is like selling the rich lifestyle. The original intention of hip-hop was to make people think. Now the force of that movement has been lost. What makes a good DJ?
There are two kinds of DJ. One is the DJ who plays what he really loves and promoters call him because they want that particular music. The other is the DJ who focuses on the entertainment aspect. In entertainment you must adapt to the crowd. I try to be in the middle of these two types; to please the crowd and also to share the music I think must be played. I like to have the knowledge of different decades to offer. I enjoy some new tracks but there is not much that is really new. If people love a new track I respect that and I’ll play it for the people. There is a lot of new talent out there, but there is so much it is harder to find the great artists. Thanks to the internet we can find new music which is not promoted by the industry, which is not interested in the music but rather in the profits. It is similar to the fast food and pharmaceutical industries. They are not interested in what is healthy but in what makes money. Music is powerful. One politician does not have the power that a great song or musician can generate!

Why don’t you make music?
I respect music so much I prefer to play and promote great music and artists. I respect it too much to make something bad so I leave it to the pros to make the music I love. I am a modest DJ that started with the vinyl. I sometimes miss the real contact with vinyl; the feel, the scratching. It was heavy luggage though. So the upside is now I only have to carry what fits in my hand!

What brought you to Bali?
I had wanted to come to SE Asia for years. I travelled Europe and the USA. I was so busy. But the west changed. The economic crisis, the system based on consuming and throwing away. I became disappointed with the western culture. I sold everything and quit everything. I put a few things in a backpack and came to Bali first. After a month my girlfriend and I travelled up through Java to Malaysia by train. My girlfriend at the time had a motorcycle accident and broke her foot so we returned to Bali for her to recuperate. One day, we were having dinner here at La Plancha and the owner Gonzalo heard us speaking Spanish and came over to talk. We became friends and after hearing my background I played here first for the Spain/Italy soccer match. Now I help them at La Plancha and at Favela. As a DJ it’s easy for me to contact and book other DJs. Now everyone is happy with the sound here and we will do the same at Favela. I have such respect for the owners here. They are music lovers. There are so many fancy, super modern venues here now but they just don’t have the soul of La Plancha or Favela. I realize I have everything I want here. I’m watching the sunset, playing my music. Eating the wonderful food at La Plancha, the energy, the people, the music and the love. I own nothing but I have everything! I feel more connected with myself and enjoy life more. I am planning to be around for a while!

Thank you for the great music everyday at sunset…it is why we all meet every day around La Plancha!

Birdwatching: How To Get Started

The Kids Went Wild in Batavia