What to do when the country is suffering its worst drought in five years and the Government yet again fails to stop the illegal burning of forests? In one village, people stage a cat wedding, before throwing the cats into a pond. Or if you claim to be more scientifically inclined, you put salt in buckets of water. Yes, the latter has been recommended by an official of the country’s leading environmental group.

Members of the Indonesian Forum for the Environment (Walhi) last month called on people across the nation to mix water with salt in order to create rain. Unfortunately, putting out buckets of salted water doesn’t create rain.

Humans have some power over nature, but it is supreme ignorance and arrogance to think they can control the climate. What people can do in spades is make things worse by destroying the environment, treating the planet as a giant rubbish dump and its precious forests as something to be destroyed for short-term financial gain.

International studies led by the Hebrew University of Jerusalem have found that urban, agricultural and industrial pollution can suppress rainfall because fine particles of pollution inhibit cloud water from condensing into raindrops, while the remaining rain falls in greater intensity.

Parts of Sumatra, Kalimantan and neighbouring Singapore and Malaysia have for over a month been blanketed in toxic haze from illegally lit fires. It is an annual problem, caused by Indonesia’s poor law enforcement. Fires are started by farmers seeking to clear land and by people acting on behalf of timber and oil palm plantation companies. The smoke causes respiratory problems and has resulted in temporary closures of schools and cancellations of flights. 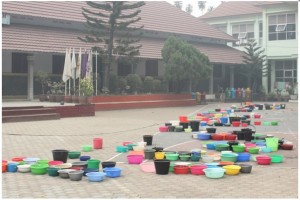 Walhi’s appeal for people to counter the haze by putting salt in buckets of water was widely disseminated via BlackBerry Messenger, WhatsApp and some online news portals.

In Sumatra’s Jambi province, the Mayor Jambi city, Syarif Fasha, on September 12 held a meeting with school principals and education agencies to call on schools to put out buckets of salted water. Some schools could not immediately comply because they had been closed because of the haze.

Schools were also instructed to hold sholat istisqo – an Islamic mass prayer for rain. The preacher leading the prayer generally requests forgiveness, as if drought is divine punishment for sins.

At Jambi State Junior High School 1 (SMPN 1), hundreds of students were told to bring buckets of water and salt from home. They had to bring their own water because a teacher said the school was facing a water shortage. The buckets were left outside for a week. No rain was created.

The Principal of SMPN 1 Jambi, Nana Sunarya, later told local media that even if the rain-making activity did not work, it had been educational for students to learn about the processes of evaporation and condensation.

The head of Walhi’s Organizational and Networking Division in Bengkulu province, southwestern Sumatra, Feri Van Dalis, had said putting out buckets of salted water daily, preferably between 11am and 1pm, would accelerate rainfall if performed simultaneously by many Indonesians, as millions of cubic metres of water vapour would be created. He said each bucket should hold about 10 litres of water and half a kilo of salt.

The state-run Agency for the Assessment and Application of Technology (BPPT) quickly issued a statement explaining that buckets of saltwater don’t break a drought. Tri Handoko Seto, a meteorologist who heads BPPT’s artificial rain unit, said creating rainfall is not simple, as many factors, such as mountains and wind patterns, influence precipitation. He said seawater off the coast of Jambi, South Sumatra and Riau is evaporating but wind patterns are sending the condensation north and northeast, so clouds are forming in northern and northeastern regions of Indonesia.

BPPT has in the past attempted cloud seeding, an attempt at inducing rainfall by dumping silver iodide or dry ice into rainclouds, but the practice has only a 30 percent success rate and some scientists doubt its efficacy. Singapore has not done any cloud seeding this season because there are no suitable clouds.

Tri said haze is best tackled by stopping people from burning off land and forests in the dry season. He said communities should form fire-fighting movements and must immediately report arsonists to authorities.

In a village in East Java province’s Tulungagung regency, locals stage a ‘Cat Wedding’ (Mantu Kucing) in the hope of summoning rain. Despite the name of the ritual, the pair of cats involved do not actually get married or even mate. The ceremony is called a ‘wedding’ because it involves a splendidly colourful and noisy procession, in which residents of Palem village dress in their finery. There is often a choir, a percussion band and dancers. A male cat and a female cat, also dressed in finery or just batik shawls, are carried by human attendants at the front of the parade, which concludes at a spring or a pond or a waterfall. The felines are blessed upon thrones, undressed, sprinkled with magic potion and then hurled into the water. They invariably emerge extremely quickly. 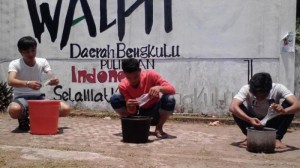 Legend has it that hundreds of years ago, Tulungagung was afflicted by a terrible drought, which had dried up rice fields, a river and a lake. Prayers for rain went unanswered, until one day an old woman went to the local spring for a bath. A tortoiseshell cat jumped in with her. Suddenly, rain started pouring. Since then, superstitious locals have believed that immersing a cat in water will create rainfall.

In 1926, the area suffered another drought. Locals claim two tortoiseshell cats were taken from the eastern and western ends of Palem village and doused at nearby Coban waterfall, and a few days later the drought broke. In the 1980s, locals began dressing the cats in fancy wedding attire, while attendants would carry elaborate umbrellas over them. At one time, it was difficult to find tortoiseshell cats, so villagers started using regular cats of any colour.

While the cats do not seem to enjoy the conclusion of the ceremony, some locals leap into the water, as they believe it has been blessed by the cats and may bring good luck and even ward off old age.

In other parts of Java and Bali, rain-making rituals often involve fights between two combatants wielding rattan sticks. It is believed that when blood starts to flow from welts, it will symbolize the coming of rain. At Mount Slamet volcano in Pemalang, Central Java, there is a rain-making dance called sintren, which must be performed by teenage virgin girls.

While there’s no harm – apart from annoyed wet cats and wounds inflicted in stick fights – in keeping ancient traditions alive, environmentalists and schools should not be encouraging communities to believe in pseudo-science or superstition. Instead, communities may be better off protesting outside the homes and offices of officials who fail to punish those responsible for illegal forest fires.

Around the World in Seven Meals, Without Leaving Jakarta