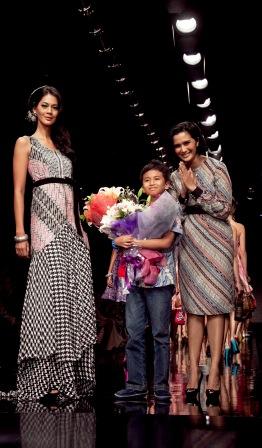 Rafi Abdurrahman Ridwan is a nine-year old hearing impaired boy from Jakarta with a vivid imagination and big dreams for the future. He has already managed to accomplish what many could only ever dream of and has become Indonesia’s youngest fashion designer.

I first learnt of Rafi at Jakarta Fashion Week 2012 which was held in Jakarta in November 2011. I was in the photographer’s pit for the duration of the week and I was loving the garments and contrasting fabrics of the show by ‘Par’ whom I had never heard of before. When the designer came out on the catwalk at the end of the show, I was in awe to see Rafi up on stage, smiling and waving to all his friends in the audience and knowing that I had just witnessed his beautiful creations. It was here that Rafi presented 24 ready-to-wear outfits all of which he had designed in a single day.

I emailed Rafi to congratulate him and to send him some of my photos of his show and he was thrilled to receive my message and he and his parents invited me to meet with them at Plaza Indonesia so they could share Rafi’s story with me. As his parents talked, Rafi sat engrossed in his sketch pad drawing a picture of me, filled with amazing details and colour and I noticed that everything in his picture had to match exactly from hair accessories, the bag, fabric and shoes. There were no rough sketches made, he drew directly in black felt tip pen being careful to make no mistakes along the way. His mother explained that people have been skeptical believing that they were involved in the drawings, but as they explained they have no creative ability and nor do their two younger children.

Rafi’s mother, Shinta Ayu Handayani, was diagnosed with rubella in the first trimester of her pregnancy and her doctor advised her that her child could be born with health issues and birth defects. Shinta and her husband, Mohammad Ridwan, decided to continue with the pregnancy as they believed they didn’t have the right to choose life or death for another human being and they believed that the child God had given them was a blessing.

Rafi was born in July 2002 with a healthy heart but had no reactions or sensitivity to light until he was three months old and he remains hearing impaired. He also suffered from respiratory tract infections and so he has spent much of his life in and out of hospital and still endures weekly trips to the hospital to this day.

Rafi’s parents enrolled him in the Santi Rama school for the deaf from the age of 2 and it was here that Rafi began his obsession with drawing fish which he loved to watch in the aquarium at home. After watching Disney’s “The Little Mermaid”, Rafi became enamoured by Ariel the mermaid princess, but was confused as to why she only wore underwear and so he began to design garments to cover her upper torso, and later seeing her as a human on TV, he started designing dresses and full outfits for her to wear.

Around this time Rafi asked his mother, “What does sound sound like?” which almost broke Shinta’s heart as she looked for a way to abstractly explain sound to her son. Shinta decided to explain to Rafi that sound is made up of many colours like yellow, pink, blue, etc. and from that day onwards Rafi’s pictures became detailed artworks filled with many vibrant colours.

At the age of five, Rafi watched his first fashion show by Indonesian designer, Auguste Soesastro, and this show inspired him to become a fashion designer. After becoming quite ill and bed ridden, he became obsessed with fashion magazines and fashion TV to improve his sketches and he practically dragged his mother to the Jakarta Food and Festival Fashion Festival after learning it was being held.

It was at this Festival that Rafi met with Indonesian designer, Barli Asmara, and he showed Barli some of his detailed and colourful sketches. Barli recognised the huge potential infront of him and invited Rafi and Shinta to his workshop where they could view some of his own drawings and creations. Rafi was spellbound at the workshop having never realised that all garments are first created from sketches and not just bought ready-made in a shop.

Rafi has a book titled “Letters to God” where he writes all his dreams and wishes and it was in this book that Barli saw Rafi’s dream to be able to hear and to hold a fashion show for his 9th birthday. Having the time and means to assist Rafi with his dream for his own show, Barli worked with him to create a small collection which was shown at Canteen in Plaza Indonesia on July 20, 2011. It was here that seven of Rafi’s designs were shown on the catwalk, all of which were designed by Rafi including the fabric used for all the garments.

After the show, Lia Candrasari, the founder of the LC Foundation, approached Rafi to congratulate him on his outstanding talents and suggested he meet with writer and textile designer Nonita Respati of Purana Batik, and accessories designer Ariani Prad- jasaputra, who is behind the Aarti brand. The three decided to collaborate together and established Purana-Aarti-Rafi, or PAR, and they presented their debut collection at Jakarta Fashion Week in November 2011, which received standing ovations.

Not only have Rafi’s fashion dreams become a reality but also through the help of Lia and the LC Foundation, he received a cochlear implant in his right ear at Singapore General Hospital in August. This has enabled Rafi to hear voices and noises for the first time in his life, and through weekly therapy sessions he has been learning to recognise sounds and is beginning to learn to make sound through speaking which is a very exciting progress for Rafi. There is no sign language for communication within the family, with Shinta having taught Rafi to lip read instead, so slowly he is learning to make sounds as he moves his mouth to speak to his parents. If all goes well with this first implant he may be able to receive another to his left ear in a few years. 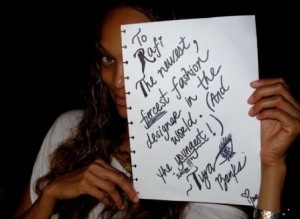 A letter for Rafi – Tyra Banks

Shinta believes there is no rush for Rafi to hold his next fashion show and he should concentrate on his schooling, but Rafi’s dreams are big and know no bounds and he is now keen to show- case his talents on the catwalks in Australia, London, Milan, Paris and Tokyo, and he is also dreaming to meet his biggest idol, Tyra Banks.

I am incredibly keen to help Rafi show his exceptional talents around the world in whatever way I can, and as his father, Mohammad, said, “Most of us are afraid to dream. We’re limited by our own complicated logics and fears. But Rafi’s a child and he simply believes in his dreams. And slowly but surely, his dreams are coming true.”

I wish Rafi every success for the future and I truly believe that all his dreams will come true.