For people like Nathan Rusli, who picked up his first cobra at the ripe old age of six, handling snakes isn’t so much a hobby as it is a passion. The idea of ship-building in bottles, collecting stamps or flying kites just doesn’t cut it.

“I found my first snake, a spitting cobra, in a ditch,” says Nathan. “It hooded up and I was shocked and terrified, but also fascinated at the same time.”

Luckily, Nathan, who is currently a high school student at Santa Laurensia, in Alam Sutra, has turned his passion into a path toward wildlife conservation, giving talks on snakes to local communities and schools, helping educate people about how valuable snakes are to Indonesia’s fragile ecosystem.

How many times has Nathan been bitten? “I’ve been bitten numerous times, but never by a highly venomous snake,” says Nathan, who started volunteering with Jakarta Animal Aid Network and the Ciliwung Institute when he was in the seventh grade. “I’m always careful when dealing with deadly snakes. Although my parents support the fact that I want to be a herpetologist, they always worry that I might die from a snake bite and they don’t want me handling venomous snakes.” 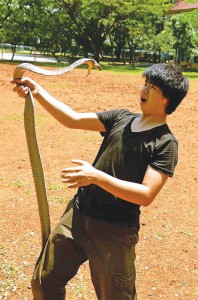 Nathan, who has also been involved in Taman Mini Indonesia Indah’s Reptile Park and SIOUX (Snake Study Organisation), considers himself more of a snake rescuer than a hobbyist. “I don’t really know why I love snakes,” explains Nathan. “It’s just that they are so unique and misunderstood – I find them fascinating. There’s just so much diversity. And their behaviour and morphology intrigues me.”

“I’m not much of an adrenaline junkie, but I do get a rush when I happen upon a snake in the wild. Even if it’s just a vine snake or water snake, it still feels like finding gold! Looking for snakes is a very thrilling experience. I never know what I’m going to find.”

Nathan’s main mission now is to educate the public about snakes, hoping that his words and reassurance might help save the lives of a few of his slithering friends. “I think people are scared of snakes because they have a bad reputation,” says Nathan. “There are plenty of myths and stories casting snakes as evil and dangerous animals, and many movies make snakes look scarier than they actually are.”

In fact, Nathan explains, only 20 percent of snakes around the world are capable of harming human beings. The rest are considered harmless. Snakes have it especially bad in Indonesia where they are seen as bad luck and often killed sight unseen. And although Indonesia has its fair share of deadly snakes – cobras, kraits, pit vipers – most snakes found in Indonesia, such as racers, pythons and tree snakes, are not harmful and rarely interact with human beings. Nathan’s work as a snake rescuer has him constantly fighting against the stigma and ideology placed on snakes. But that’s OK with him, because if he doesn’t do it, who will?