This article follows on from that on Classic Western Fiction Set in Indonesia and Malaysia published previously in issue 76. Most of the books mentioned here have not been published or reprinted by Oxford-in-Asia or Periplus, for example, but often become available for online purchase.

Romantic Java (1927), by H S Banner, is a collection of pieces originally submitted to The Times of London, by a fairly obscure writer. It is a wonderful record of the Java of those days, covering both kampung and kraton life, and the pastimes of bored expats who would do things like living a whole day backwards, starting with a whisky soda, say, and going to bed after bacon and eggs, or being the first persons to nearly climb Gunung Ciremai. His romantic feel for the dramatic landscape of Java is shown by such passages as a powerful atmospheric description of a rainstorm shaking the forested slopes of Gunung Kelud. A great book. 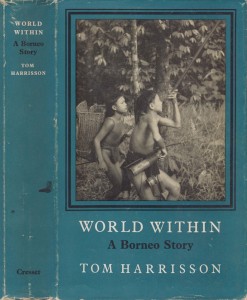 Tom Harrisson was parachuted into Bario, in the heart of Borneo, with some colleagues in 1945, to organize the native Kelabit to attack, from “within”, the Japanese who occupied the giant island. He tells his story in World Within (1959), now republished by Oxford-in-Asia. He has a unique feel for the natives and for the strategic layout of the island. World Within is also significant in that it has directly inspired two other books, All Elevations Unknown (2001), by the American mountaineer Sam Lightner Jr., which is both an account of the ascent of Bukit Batu Lawi near Bario, and a eulogy of and tribute to Tom Harrisson and his Australian comrades.

The Alsatian Pierre Schoendoerffer’s Borneo novel Farewell to the King (1969) is also based partly on Harrisson’s story, and partly on the true exploits of the benign Rajah Brooke and the notorious Turk Westerling, as well as Conrad’s fictional Kurz and Lord Jim. (Allow me to do some name-dropping here. In the 1980s in Saudi I worked with the Tambourine Crab – Pierre Guillaume, aka “Le Crabe-Tambour”, the legendary French naval officer and single-boat voyager, who was the subject of both a book and a film by Schoendoerffer. He told me that all of Schoendoerffer’s work was firmly based on fact – he couldn’t write pure fiction.)  Farewell to the King was made into a compelling, underrated movie 1988 starring Nick Nolte.

Still in World War Two, the South African writer and explorer Sir Laurens Van Der Post wrote about his experiences, as a prisoner of the Japanese in Bandung, in The Night of the New Moon (1970), then, as a player in Indonesia’s transition to independence, in The Admiral’s Baby (1996). The first book is a moving attempt to balance the horror of Hiroshima against the scenario that, if Japan had not been forced to surrender, seeing the Bomb as a sign of divine wrath, thousands upon thousands would have died, as the Japanese would have fought to the last man across the territories they still held, and that the first to be massacred would be the POWs, one of whom was Van Der Post himself, and who in his camp were clandestinely preparing for a hopeless resistance.

The first book was slightly marred for me by his statement that the local inhabitants, in contrast to the prisoners, were fairly well-off under Japanese rule and also that, to create a symbolic effect, Van Der Post has the sun setting over Mount Malabar, which is just about due south of Bandung. In The Admiral’s Baby he probably exaggerates his role in mid-wifing Indonesia’s independence, and there are too many tiresome comparisons of himself with Raffles, Lord Jim, and others of that calibre.

The predilection of Van Der Post towards mendacity has been exposed in a fascinating biography, Storyteller (2001) by J D F Jones. It all seems so silly and unnecessary. Because Van Der Post was a great man, an inspirational and even saintly figure, for example, to his fellow prisoners in Bandung, and an indefatigable writer, lecturer, traveller, and above all charmer and storyteller. In the end apparently he himself could not remember the boundary between fact and fiction. You’d have thought that his friends would have told him, “C’mon Laurens…” The Englishman John Coast (1916 – 1989) led a most interesting and eventually triumphant life. He survived the Siam-Burma railway as a prisoner of the Japanese, and wrote about his experiences in Railroad of Death (1946). He then took part in the Indonesian Revolution on the Indonesian side, as press attaché to President Sukarno, and wrote about this in Recruit to Revolution (1952), a key book for understanding those times. He shows us at first hand the charisma and charm of Bung Karno, but also the frustrating bureaucracy of Indonesia (already present at its birth) from which he would escape to the arms of his Thai girlfriend in Bangkok. He eventually found his true vocation as an impresario, bringing the first post-war troupe of Balinese dancers and musicians to England, which he describes in Dancing Out of Bali (1953). Eventually relocating to Britain with his Javanese wife, he continued his career in show business, arranging, for example, Bob Dylan’s first visit to Britain. Isn’t that enough memorable experience for three or four lifetimes?