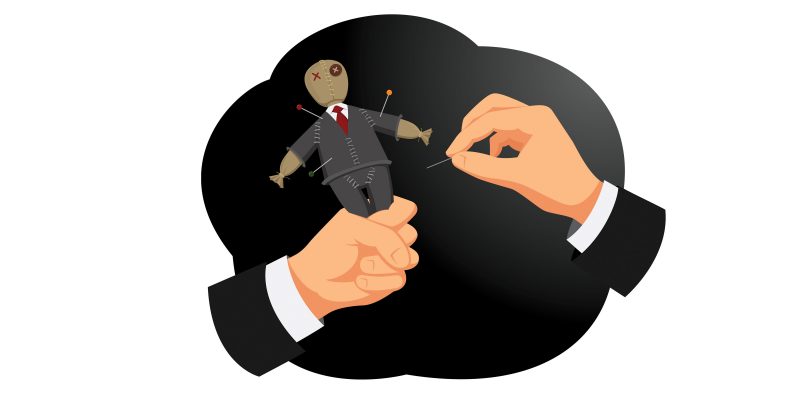 From ghosts to talismans and black magic, irrational beliefs remain widespread in Indonesia despite rapid advances in science, technology and education. Why does superstition persist in an age of reason?

Are you feeling fatigued? Failing to achieve financial or romantic success? Then don’t blame yourself! Perhaps your house is haunted. Or maybe someone has placed a curse you. So why not purchase a gemstone, a magical dagger or a piece of tiger skin smeared in elephant semen? They’re all powerful talismans that can overcome your problems.

Ghosts aren’t real. Neither are genies or malevolent spirits. Amulets imbued with magical powers are as potent as a broken Hello Kitty toothbrush. Magic is nothing but trickery and delusion.

Superstition has existed for aeons, predating modern religion, and remains prevalent because tradition trumps logic and science. Psychologists assert that people crave the comfort of rituals to deal with uncertainty and adversity and to feel they are in control. Belief in the paranormal is a socio-cultural phenomenon in Indonesia, ingrained since infancy.

“Don’t whistle at night or you will attract ghosts!” a Javanese mother snaps at her daughter. Another common Indonesian superstition holds that if a girl stands in the doorway of her home, she won’t be able to find a husband. A butterfly entering your house indicates you will soon have a visitor. Such nonsense seems harmless. Problems start when people lose their money or their health because they allow themselves to be deluded by scammers preying on ignorance.

Also, populations are easier to politically manipulate when they follow superstitions, rather than engaging in critical thinking that could prompt demands for accountability and justice.

A modicum of superstition can be beneficial, if it results in positive thinking, causing a person to be more disposed to take advantage of opportunities. Or you could simply focus on positive affirmations, encouraging yourself to take necessary actions to achieve your goals.

Indonesia has an incredible amount of talismans, from keris daggers to agate rings to animal parts. Amulets are generally useless, although possessing a lucky charm can lead to optimism, resulting in success.

Even unusually formed sticks are reputed to provide powerful energy. For example, a bamboo segment with a hole made by a chewing beetle is said to bring good luck to gamblers. A small section of bamboo with two stunted stems pointing toward each other, known locally as pring pethuk, can be sold for millions of rupiah because people think it will cause success in business and politics.

In Karanganyar, Central Java province, an enterprising man named Widodo downloaded and printed some photos of pring pethuk. He told people he needed capital to purchase the sticks locally and he could then sell them in Jakarta for Rp.4 trillion (US$296 million).

Nanik Sunarni, a 59-year-old grandmother, invested Rp.50 million (US$3,700) in the scheme in February 2016. She received an official-looking receipt and was instructed to wait for the big money to start rolling in. After more than a year of nothing, she complained to police, who arrested Widodo.

An unusual Indonesian talisman is rantai babi (literally, pig chain), a metal-beaded ring surrounded by wild boar hair, which is said to provide the wearer with immunity to weapons, including bullets. It was particularly popular among warriors in Aceh, the last part of Indonesia to be conquered by the Dutch. 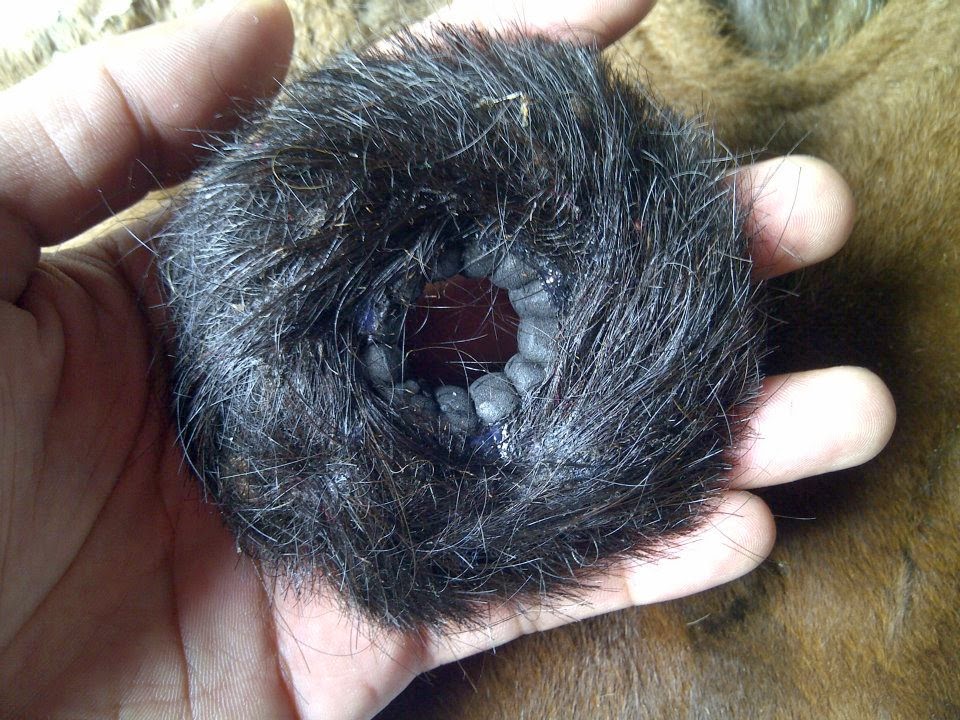 According to legend, certain wild boar, when foraging for food, would get an earthworm stuck in their snouts, and this worm would transform into a metal hook or ring, rendering the pigs invulnerable. If a person could find one of these hairy rings, they would attain special powers, although side-effects included itchy skin and a bad temper.

These days, many shysters are selling rantai babi online, with prices ranging from a mere Rp.36,000 (US$2.65) all the way to Rp.500 million (US$37,000). Some are reputed to create invisible shields, protecting a person from any spells cast by a Muslim, based on the Islamic aversion to swine. One vendor claims the objects can increase charisma and intellect, making the wearer politically powerful and respected. He also says the rings will prevent accidents. But, he warns the ring will only work in times of emergency and will lose its power if not buried underground.

One gang of scammers claimed a pig-hair ring caused a room in their house to fill with money, but if anyone wanted to buy the ring, they would first be milked for endless payments for bogus rituals to ensure the efficacy of the magic. Another ridiculous claim is that if you put the pig ring into a sack and then rub it against the wall of a bank at night, the sack will fill with money. Surely, no one would believe that?

Edi Kusendang, 30, a resident of Bengkulu province, was looking for some easy money to help his parents out of debt. In January, a friend introduced him to Chairul Ambri, 63, who boasted of owning a rantai babi that could multiply money. First, Edi transferred Rp.3.2 million (US$237) to Chairul’s wife, purportedly for the purchase of materials for a ritual. Next, he withdrew his life savings and borrowed money, ending up with Rp.153.2 million (US$11,340), which Chairul promised would magically grow to Rp1.5 billion (US$111,000).

Chairul took the money into a room at Edi’s house, then expelled Edi while working his “magic”. He told Edi to keep the room closed for 40 days, after which the money would have multiplied. When Edi eventually opened the door he found the money was gone. In a similar case in the same province, two scammers in 2015 collected payments of over Rp.50 million, promising a boar ring would transform the cash into Rp.2 billion. 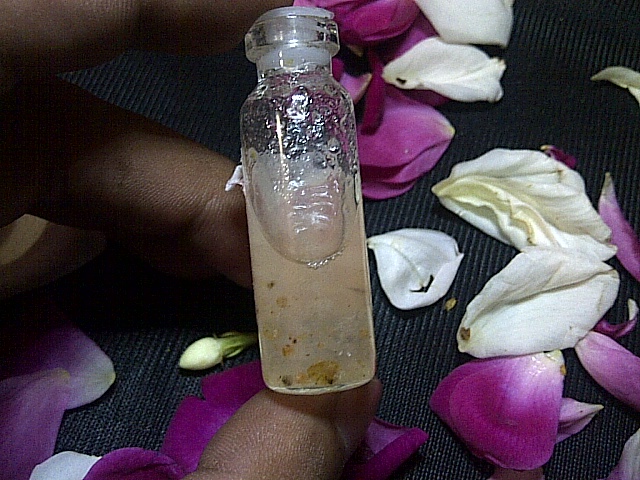 If you subscribe to superstitious claptrap, then consider purchasing some elephant semen, which is sold in liquid, crystal and fossilized forms from Rp.14,000 to Rp.200 million – and is probably fake. Vendors claim that if you rub the liquid into your hand, then the next person you touch will fall in love with you, or be more agreeable to business propositions. Some people think tiger skin smeared in elephant semen is especially potent for improving virility and wealth.

Human semen is also used in paranormal scams. In the East Java capital of Surabaya, a woman opened a coffee shop at her house and was told by a local dukun (shaman), Suhadak, that his magic could ensure her business would always be busy. First, he ritually buried some sticky rice and salt in her back garden. Then he declared the house was haunted and the only way to expel the ghost was for the woman to consume his semen through sex. Police arrested the man in August and discovered he had scammed at least three women with the same story.

In 2015, Indonesia was gripped by a craze for rings with large gemstones, mostly worn by men. Some say the mania was started by former president Susilo Bambang Yudhoyono, who often wore such rings. Vendors came up with all sorts of spiels for the nonsense powers of the various stones: they could cure disease, make you rich, and win you a promotion. Many of the stones touted as being precious gems are just cheap agate or glass imitations. 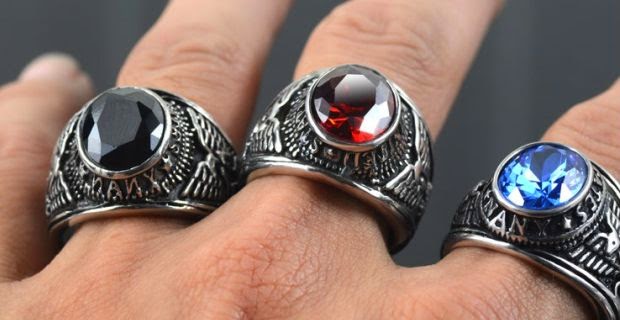 Police in Riau province this year arrested a man for selling phoney rubies, made from glass, which he claimed would heal the sick and cause Rp.1 billion or more to magically materialize. He convinced at least two people to sell their cars to raise money to purchase worthless glass for Rp.35 million to Rp.70 million. The victims were instructed to pray sincerely at mosques in order for the magic to work but eventually realized they had been conned.

Scammers who sell amulets promising great fortune and special powers often warn their customers that spiritual purity is essential for the magic to work. For example, people should regularly recite special prayers, refrain from sex, follow a prescribed diet and perform special rituals. Therefore, when the magic fails to work, it is the client’s fault for failing to sincerely follow all instructions.

On October 3, police in Tegal, Central Java, arrested a self-styled holy man who had claimed to be the reincarnation of Adam, the first man. Sutrisno had started out as a traditional healer in 2011 before switching to preaching in 2013. He told his disciples that sex outside marriage was permitted and is now accused of heresy and sexually abusing girls.

In Magelang, Central Java, a couple of dukun targeted girls, telling them they were possessed by demons and would go insane unless they consented to sexual intercourse or massage “to expel holy water.” The two were arrested in June.

Not all magic is motivated by malevolence or greed. A popular form of entertainment in Banten province is known as debus, in which men clad in black show off their “supernatural powers” by being stabbed and whipped, and even eat fire and shattered glass. This must be proof of magic, right? No. These skilled performers are just well trained in tricks. For example, a man uses a long knife to slice through some fruit, but he then puts the same knife to his skin and is uncut. How? Most of the knife blade is sharp but a blunt part is placed against the skin. As for eating glass, some magicians use fake glass, but others use a smashed light bulb, the thin fragments of which can be ground down by the molars to a sand-like consistency, which can be safely swallowed by first eating sticky rice and bananas. Contrary to portrayals in TV shows and movies, consuming a small amount of finely ground glass is not fatal. Obviously, such a trick is unsafe for untrained beginners.

Tabloid Indonesian media and populist TV networks have done little to educate people against superstition. Instead, some have focused on brainwashing viewers into thinking that ghosts are real. The worst offender was a stupid program called Pemburu Hantu (Ghost Hunters), which ran for seven years and starred a team of Muslim clerics pretending to catch ghosts in “haunted” houses.

One of the Ghostbusters, Muhammad Susilo Wibowo, who called himself Ustadz Guntur Bumi, set up a lucrative side business, claiming he could heal people through prayer and touch. He sexually assaulted several female patients as part of the treatment. He also told some people they were ill because their houses were haunted, and for a high fee he could exorcise the ghosts. In 2014 he was jailed for just six months.

The Indonesian Broadcasting Commission has issued a code of program standards that restrict the airing of shows featuring horror and mysticism to between 10 pm and 3 am. Despite this, many young Indonesians still believe in ghosts and the paranormal.

There’s nothing wrong with traditional superstition as entertainment and a source of self-confidence, but people would be wiser to focus on the intricacies of the real world, rather than thinking that problems can be solved by acquiring an amulet or vanquishing a ghost. As long as people yearn for shortcuts to power, wealth and health, there will always be targets for those peddling paranormal solutions.