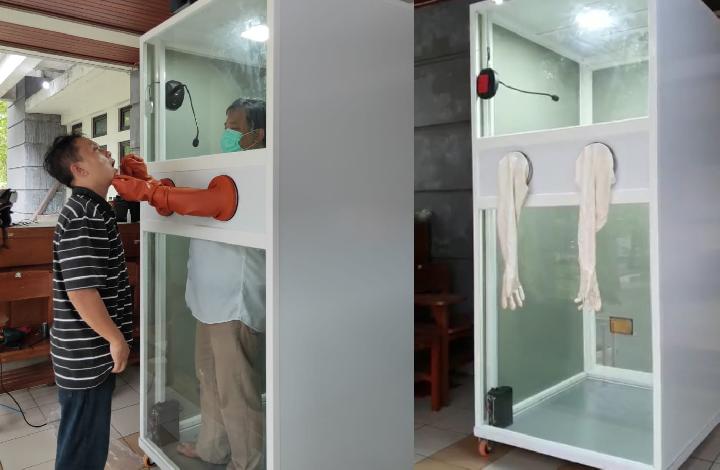 A lecturer at Gadjah Mada University (UGM) has developed a swab booth equipped with HEPA filter that protects health workers as they administer coronavirus testing.

The Faculty of Agricultural Microbiology in the Department of Agriculture at UGM explained that the process of sampling mucus from inside the nose or throat of the patient uses a protruding glove on the outer side of the booth.

He hoped that the booth would not only help preserve stocks of PPE during swab testing, but also provide convenience for health workers when conducting a swab test. The safety of both health workers and patients is still of the utmost importance.

“Health workers just need to use masks so that their comfort isn’t burdened by wearing a heavy hazmat suit,” said the man who earned his doctorate at the University of Tokyo.

The booth is 90×90 cm and 2 metres high. It should also can also reduce the waste of medical equipment and get around the shortage of kit like gloves and gowns.

The swab booth is made from an aluminium composit panel (APC) with a thickness of about 3 mm and is equipped with a door on the back. To the front is a panel of glass, 6 m thick, with two holes mounted with long-hand gloves up to medical standards. The booth is also equipped with disposable gloves for health officers examining the patient.

Ideally, Jaka said that in the study of environmental biotechnology, a Boyi cubicle uses stainless steel, but cost is a major constraint. Meanwhile, the use of wood is not possible and GRC material is less suitable to be cleaned with disinfectant.

Despite using cheap materials, the quality of the swab booth is maintained and in accordance with medical standards. The booth is also equipped with a HEPA filter; used to make the room clean and sterile like in the laboratory, along with lighting and a ventilation fan. It also comes with an amplifier and speakers to facilitate communication with the patient.

The design is dynamic: it can easily move around on its four wheels that are attached underneath, meaning it can be used in various locations. Disinfection is then done using disposable gloves before it’s ready for the next patient.

The making of this booth was inspired after Jaka viewed a video of a South Korean health worker who was conducting a swab in a similar booth to examine and swab a patient.

“My background is microbiology. It’s been more than 35 years since I’ve learnt about bacteria, fungi, viruses, and others. I study the characteristics of viruses like what exactly are they,” he said.

To make one unit of the swab booth, it costs around Rp8 million. He explained that the booth’s construction was aided by the community’s donations, including through the Whatsapp group “Sambatan Jogja (Sonjo)” initiated by colleagues from FEB UGM, Rimawan Pradiptyo PhD.

Production capacity is still limited to 10-15 units per week, “We will soon create five more swab booths that will be distributed to a number of COVID-19 referral hospitals,” he explained.

Jaka said that by creating the swab booth, the younger generation could be inspired to innovate and develop a better one to work together in tackling COVID-19.