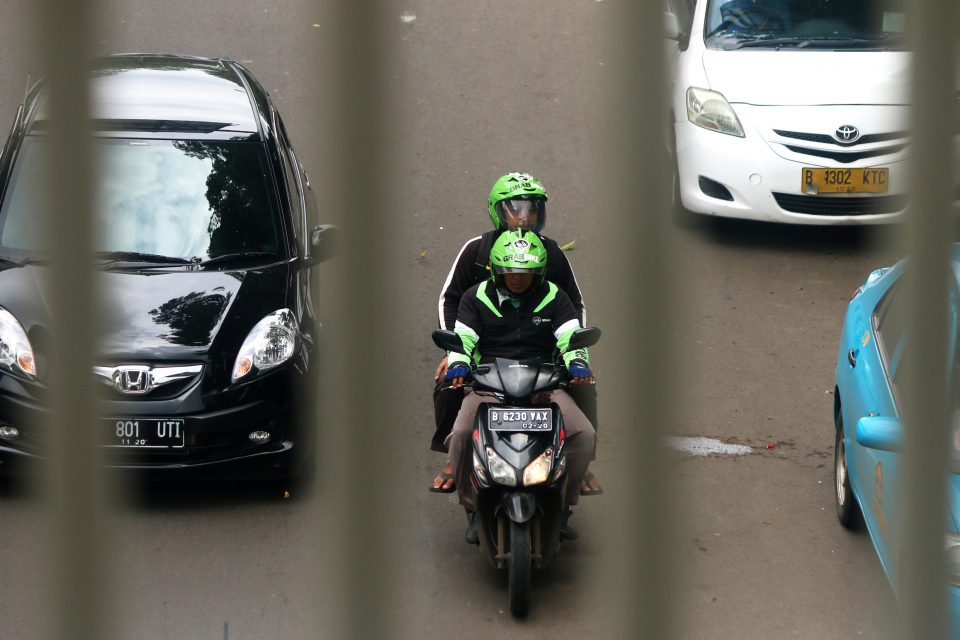 Like most Jakartans, if I have to go less than 200 metres, I walk.

Now I have my Scoopy motorbike, for distances over 200 metres and under five kilometres, I scoop.

For distances over five kilometres, I order Grab or Gojek.

These expanding radii have huge implications for how Jakartans use and experience their city.

It seems to this bule that Jakarta atomises to neighbourhoods with a radius of 200 metres – the distance Jakartans are prepared to walk. This creates an intimacy that belies the anonymity and cruelty of the big city. It remains a city of kampung.

Within the 200-metre bubble, everyone appears to know everyone: the bakso man, the woman with a fax machine, the cook in the warteg, the mechanic, the chemist in the apotek, the shop that sells mangos and bananas, the hairdresser…. There’ll be a school and a mosque alongside every tiny business the kampung needs for its most important daily needs – all within the walking distance bubble. After all, not everyone in Jakarta has a motorbike; there are old people and children and housewives and students and unemployed….

This 200-metre fragmentation has shaped the economy of the city. As chain stores and malls have increasingly devoured the city’s disposable income, hundreds of thousands of tiny, neighbourhood stores have survived. They may not have the same choice or the same prices – but they’re just around the corner, within walking distance.

Ironically, Jakarta’s congestion and the consequent survival of these tiny businesses means the city remains viable for everyone.

To go further, you need transport and you need money.

The next bubble seems to have a radius of up to ten km and I’ll call it a town. Lying at the centre of this town is a mall, the town’s focal point. It’s normally not more than 20 minutes away by car or motorbike. Gojek and Grab make travelling this distance feasible for many.

The mall is where you come if you have leisure time – to see and be seen, to meet and to greet, to shop until you drop, and to eat until your kidneys scream at the overload of gula (sugar).

There are reasonable malls, bad malls, and atrocious malls, but it seems to this bule that most malls have not yet understood the crucial role they play in the life of their surrounding town. Not surprisingly most are devoted exclusively to selling stuff. Sadly, mostly stuff no-one actually needs.

I would like my mall – yes, MY mall – to be less exclusionary, to have more meeting spaces, to have spots where you can sit and people watch, to have some greenery and running water, maybe some sculpture. Given the toxicity of Jakarta’s air, it is perhaps unreasonable to hope for outdoor spaces, but it would be nice to have some spaces with height and natural light, somewhere I could escape fluorescence.

My hope would be that malls that seriously embrace their role at the centre of the community would out-perform those that don’t.

Put simply, I’d like my mall to have an Indonesian piazza at its heart. But a few seats and open spaces would be a good start.

Halal Park to be Launched at Jakarta Airport to Welcome Ramadan