Belief in black magic is a psychological condition that afflicts millions of people who are susceptible to the power of suggestion because they have been raised to believe in the supernatural over the scientific.

The term ‘dukun’ can refer to shamans, psychics, traditional healers and spirit mediums. Dukun have existed throughout the Indonesian archipelago since time immemorial. They are regarded as being either good (performing white magic) or malicious (dukun santet performing black magic), although the line between the two is often crossed. Specialist dukun offer services from immunity to weapons to weather control to bringing misfortune to rivals in love, business and politics.

The ‘magic’ is administered in a variety of ways, including massage, herbal tonics, incantations over water, leaves and food, sacrificing animals, card-reading, smearing a client’s skin with saliva, faeces or semen, inserting gold needles under the skin, and in some cases, by criminal physical abuse.

Becoming a dukun is a bit like becoming an undertaker or a farmer: usually you inherit the job from your father. Some dukun are benevolent elders, who merely provide blessings and advice for little or no financial reward. Others are braggarts, con-artists and thieves, motivated by greed. And a few are rapists and murderers.

Here’s a typical example of why people believe in black magic. “My friend was really sick after her husband divorced her. No doctors could cure her. Then she visited a dukun, who extracted nails and pieces of glass from her body. He said the ex-husband had paid another dukun to put a curse on her. It must be true or how else do you explain the nails and glass?” Very easily: sleight of hand. An amateur magician can simply conceal such objects in their hand and then pretend to extract them from a patient’s body. “So if it was a trick, how did my friend get better?” Some illnesses stem from psychosomatic issues, especially when people are naturally superstitious or suffering stress caused by a marriage breakup or losing a job. In these cases, a person must subconsciously and consciously want to be healed for the body to start getting better. Faith in a dukun may be a psychological key to recovery. Such positive thinking can be a placebo that accelerates the body’s natural ability to recuperate from many ailments.

Likewise, if you’ve paid a sorcerer good money to improve your sex life or your political career, and you firmly believe he has magical powers, then naturally you’ll start behaving much more confidently and positively, which should make you more popular. 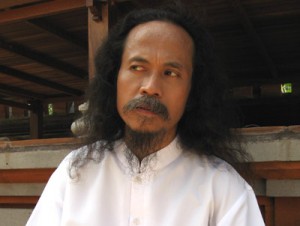 One of Indonesia’s most prominent dukun is Agus Yulianto, who works under the name Ki Joko Bodo and charges from Rp.350,000 to thousands of dollars for a consultation. For years he advertised heavily in the tabloid press and has appeared in TV shows and movies. He lives in East Jakarta in a temple to narcissism, decorated with paintings and carvings of himself. He claims to have over 30 wives, one of whom he admitted to assaulting last year, resulting in domestic violence charges, which were later dropped. Beneath his spooky castle is a fake cave, where his consultations can take as little as 15 minutes, which must be good for business, evidenced by his collection of luxury cars.

Joko claims he is attuned to forthcoming political upheaval and natural disasters. He did indeed once save Jakarta from a terrorist attack. In 2001, he received a visit from a woman plotting to kill the attorney general and the trade minister, and to bomb the Tax Office – allegedly on behalf of her friend Tommy Suharto. She asked Joko for help to plant and detonate three bombs, promising that Tommy would pay him Rp.1 billion when they were successful. Joko instead called the police and the woman was arrested in possession of the bombs. In those days, Tommy was on the run from the law for corruption and murder, and had been linked to a series of explosions. However, he possessed the most powerful talisman in Indonesia – loads of money – which meant he ended up spending less than five years in jail.

Some opportunistic dukun rape women and children, claiming it is part of the ‘treatment’. A Central Java dukun accused of raping a virgin bragged he could bribe his way out of prosecution. In the East Java city of Kediri, a dukun named Somoredjo taught his male students that raping girls and not washing off the resulting blood for a day would make them immune to knives and rivals’ magic. The students raped 20 girls and killed one, before police stopped the attacks. Rapists sometimes blame their action on evil spirits. When the head of an Islamic boarding school in Tangerang was accused of raping a 15-year-old student, he claimed that his “pet genie from Mecca” had possessed his body when he assaulted the girl. That’s as ludicrous as Vatican officials claiming that paedophile priests were possessed by Satan.

Last year, 24 graves of children were robbed in one night at three cemeteries in East Java. Locals said the corpses were taken for black magic to give powers such as immunity or invisibility. There are even reports of babies being abducted, beheaded and buried outside a house to create wealth for the occupant. A notorious dukun from North Sumatra murdered 42 of his female clients, because he believed that drinking their saliva and burying them upright with their heads poking out of the ground near his farmhouse would increase his powers.

For every miracle cure story, there are more cases of dukun mistreating various ailments, sometimes causing patients to develop complications and die. Many women seeking to terminate an unwanted pregnancy will visit a female dukun, some of whom use forceful massage and insertion of objects to induce a miscarriage. According to the UN, complications from unsafe abortions are believed to be responsible for 15% of maternal deaths in Indonesia. 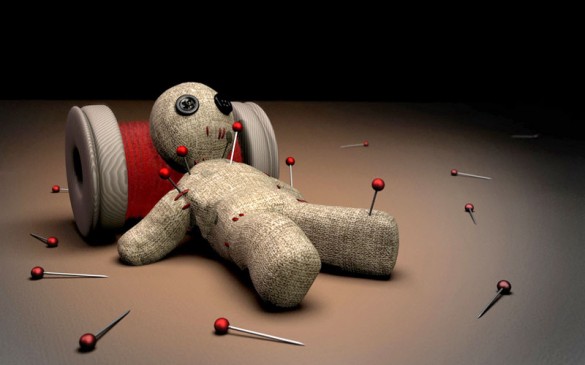 One culinary love potion is nasi kangkang, which is prepared by a woman naked from the waist down, squatting over steaming white rice, thinking about the man she wants to control, and allowing sweat and vaginal discharge to trickle into the rice. The man who eats this rice will supposedly be faithful and obey the woman’s commands. Note that this doesn’t work on gay men. One husband when caught in bed with his maid claimed she had fed him nasi kangkang, so he was powerless to resist her.

Menstrual blood, saliva and urine are reputed to be potent potions when added to food and drink. I was once advised to avoid a certain bakso (meatball) vendor because she allegedly stirred the food with her unwashed underpants, confident that this would bring good sales. An Indonesian maid in Hong Kong was in 2010 jailed for adding her urine to milk for a nine-month-old baby in her care, believing her action would make the infant more obedient. In Singapore, a maid stirred menstrual blood into her employer’s coffee, hoping to make her boss more pleasant. A celebrity cannibal from Central Java named Sumanto said he ate corpses to attain supernatural powers. Superstitious consumption of human secretions and flesh is not limited to Indonesia. Japanese soldiers believed eating parts of enemies killed during war would make them stronger. Christians have for centuries been consuming symbolically the blood and flesh of Christ. Some Chinese women believe that eating placentas will make them youthful and healthy. Conversely, many new mothers in Indonesia bury the placenta in the garden, believing it is their baby’s spirit guardian.

Dukun are often blamed for theft. A maid or driver sent to pay a bill may steal the cash and then pretend to have been hypnotised and robbed. On a larger scale, an employee of state-owned Bank Mandiri stole Rp.18.79 billion from customer accounts, later claiming that her husband would have died unless she provided the money to a female dukun. An official of the Anti-Corruption Commission in 2009 stole Rp.338 million and gave it to a dukun who had promised to double the money.

People fleeced by charlatans are not always too embarrassed to come forward. Tax official Gayus Tambunan, who is serving a 12-year jail term for corruption, complained that a fellow inmate – a dukun serving time for fraud – had conned him out of SGD$600,000 by promising to double the cash. In another case, Iden Junaiedi from West Java first paid a dukun Rp.3.3 million for help to overcome a “personal problem” and was told to wash with some “magical water”. Over the following months, he made payments totalling about Rp.37 million to the dukun, who claimed that Iden’s bank account would magically receive massive transfers. When the opposite occurred, Iden reported the matter to police and the dukun is now on trial for fraud.

Aspects of black magic have long been illegal under Indonesia’s old Criminal Code, with punishments ranging from a Rp.300 fine for selling psychic services to three months in jail for teaching magic for criminal purposes. Under the government’s proposed revisions to the Criminal Code, black magic practitioners could get up to four years in jail.

In 2008 there was a rumour in Sumatra that black magic was being transmitted via mobile phone text messages that had the power to kill recipients. Several prominent dukun started SMS subscription services to send advice to the gullible.

Violence against dukun is not unknown. About 150 suspected dukun santet were killed in East Java in late 1998, mostly in revenge attacks, some of which may have been politically motivated. Sporadic killings still occur. In Pasuruan, East Java, a 70 year old farmer was stoned to death last month by a mob accusing him of black magic. The farmer previously had a disagreement with a neighbour, who later died from diabetes and heart disease. Locals assumed the farmer had killed him with black magic.

Indonesia’s finest author Pramoedya Ananta Toer, who viewed Javanese superstition as backward, seems to have had a soft spot for some dukun, indicated in a novella where a kindly dukun admits he cannot cure a dying man. A shaman can offer only hope but cannot necessarily deliver results.

Hoping for a magical cure from a dukun is no different to seeking Christian ‘faith healing’ involving prayer and touch. Some dukun offer false hope, as do some Western doctors prescribing costly, futile chemotherapy to terminal cancer patients. Westerners who believe in astrology and feng shui are just as gullible as Indonesians who believe in ghosts.

Former presidents Sukarno, Suharto, Gus Dur and Megawati Sukarnoputri all consulted dukun. President Susilo Bambang Yudhoyono complained during the 2009 election campaign that he could feel his opponents attacking him with black magic. When doctors last year removed 26 nails and 2 syringe needles from the legs and back of a 3-year-old girl, South Sulawesi’s governor failed to recognize a case of child abuse but instead asserted the nails had magically entered the girl.

During the 2008 trial of Muchdi Purwopranjono, the state intelligence man accused of ordering the assassination of human rights activist Munir, it emerged that the plotters had considered using black magic to commit the crime but then opted for poison, which was tested on cats.

Schools are sometimes hit by ‘possessions’ – wherein one student pretends to see a ghost or be possessed by a demon and starts behaving hysterically, prompting other impressionable students to behave the same way. Belief in magic doesn’t mean a person is stupid. It merely indicates the power of social conditioning. The Indonesian media feeds viewers TV shows that portray ghosts and magic as real. Old Scooby Doo cartoons are vastly more educational because the ‘ghost’ is always unmasked as a fraud at the end.

Violence will continue to erupt in Indonesia in times of crisis if society continues to uphold irrational fears. Rather than believe in black magic, people could become more analytical and learn from the magic of science.