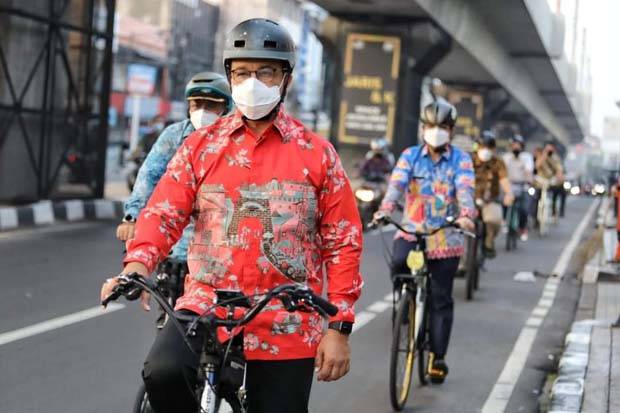 DKI Jakarta Governor Anies Baswedan is marking this World Bike Day by cycling to work; he and his entourage were seen crossing the Sudirman-Thamrin area along the city’s bicycle paths.

“It took me approximately 19km from my house to the City Hall. Then we gathered at the Senayan roundabout,” said Anies at City Hall.

“We usually see bicycles as a sporting tool; that’s fine, it can be continued, but it needs to be added to. Cycling doesn’t require having a special bicycle nor wearing special shoes and clothes. We can wear our daily clothes, use the bicycles we usually use, then use the bicycles for transportation,” he explained.

Meanwhile, the Directorate of Traffic at the Metropolitan Police and the DKI Jakarta Department of Transportation have agreed on a regulation that allows road cyclists to ride outside the bicycle lane at certain times, namely in the morning between 5am and 6:30am.

“This is to provide space for bicycle users who are cycling for sport, whose can’t get enough speed when using the bicycle lanes that have been provided,” said Traffic Directorate Police Chief Commissioner Sambodo Purnomo Yogo.

Since Wednesday 2nd June, the police, together with the Transportation Agency, have also deployed personnel to monitor the implementation of the regulation. Later, if there are still cyclists who travel outside the lane after 6:30am, officers will immediately grant an appeal.

“Well, this is part of a pre-emptive effort. The next step is prevention by conducting patrols to ensure no cyclists violate these rules. The last resort is repression through the application of fines against violations,” explained Sambodo.

Sambodo continued, the SOP of these sanctions, whether the bicycle will be confiscated, confiscation of the rider’s ID card, or an on-site decision are currently still under discussion. This is the first time that actions against non-motorized vehicles, especially bicycles, will be taken.

The policy arose from the photo of road bike cyclists who were given the middle finger by a motorcyclist a few days ago. With this dispensation for cyclists, road bikes can ride on Jalan Sudirman-Thamrin and the Non-Toll Flyover (JLNT) on Kampung Melayu-Tanah Abang, Central Jakarta.

On another occasion, DKI Jakarta Deputy Governor Ahmad Riza Patria emphasised that the dispensation policy for road cyclists is still in the trial phase for the next two weeks, before officially entering regulations.

The use of public lanes for non-motorized vehicles is regulated in Law No. 22 of 2009 concerning Road Traffic and Transportation. Article 122. It states that drivers of non-motorised vehicles are prohibited from using other vehicle lanes outside of the special lanes that have been prepared.

Article 299 states that non-motorized vehicle drivers who violate will be sentenced to 14 days in prison or a maximum fine of Rp100,000.