Over 80 apps and websites with LGBT-related content may soon be banned by the Indonesian government.

As the Indonesian LGBT community continues its fight for equal rights, the nation is now moving to disallow networking apps and websites that promote ‘sexual deviancy’. These apps include Grindr, Blued and Boyahoy.

The decision to ban the apps and sites was made during a private meeting on Wednesday, where authorities reviewed a police request to remove 18 LGBT apps after they were allegedly used by a child prostitution ring.

“Most of the contents are leading toward pornography [and have] violated the law on pornography and the law on child protection,” said director of information security for the Ministry of Communications Aidil Chendramata in a statement on BuzzFeed News. 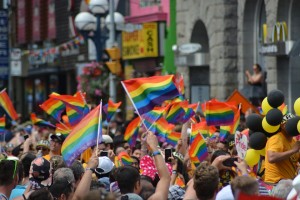 As the nation appears to be taking steps towards the proposed ban, private companies like Google and Apple are confronted with the consequence of having to remove the apps from their digital stores. “We will ask the stores to take down the apps for Indonesia,” said Communications Ministry Head of Investigations Teguh Arifiadi.

Indonesia is likely to face another round of international condemnation if the government puts this plan into action. Speaking to TIME, deputy director of Human Rights Watch Phil Robertson revealed that banning LGBT apps would only reinforce the nation’s growing intolerance towards the LGBT community.

“This ban on what Indonesian authorities called ‘LGBT applications’ is discriminatory online censorship, pure and simple, and yet another blow against the rights of LGBT persons in the country,” he said.

Over the past several months, the rights of the LGBT community have been called into question. In August, the Constitutional Court even proposed to make homosexuality a crime in Indonesia.

Law expert Hamid Chalid protested during a lawsuit hearing last month, saying, “Our country has legalized fornication, male rape, and homosexual acts. We’ve allowed our constitution to become too liberal — is that what we want?”