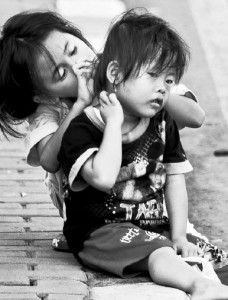 Busking is an activity that can be witnessed in any number of the world’s cities. London, for example, is particularly famous for its tube station musicians, many of whom are actually music students trying to make a few pounds on the side, and those underground platforms that reverberate to the sounds of guitars and saxophones are virtually a tourist attraction in their own right.

Things are a little different in Jakarta however. When one enters a traffic lights queue here, hoping to reach the front before the planet suffers the heat death, you’re unlikely to be confronted by anyone who’s had any formal musical training or indeed any education whatsoever. There will usually be one or two youngsters outside your taxi or car window, and it is quite likely that, age wise, they won’t have made it to double figures yet. They may have a stick with a couple of bottle tops nailed to it which they shake whilst singing along listlessly in a monotone mumble. If you’re really unlucky, they’ll have a guitar between them. It is possible to buy one of these buskers’ guitars extraordinarily cheaply, however most of them haven’t really been built with the same loving care as a Fender Stratocaster, and tend to slice one’s fingers when one presses down on the cheese wire strings.

You get the picture, the noise produced is not usually a thing of beauty. Busking here thus represents the inverse of its usual function. Basically, you pay these poor fellows to stop playing and to go away and assault someone else’s sensibilities, rather than because you enjoy their caterwauling. A couple of thousand rupiah will usually see these poor unfortunates scuttling away like greyhounds into the traffic. If you don’t pay up, then they’ll usually just shuffle away anyway, although occasionally they can practice some of the few choice Anglo-Saxon swear words that they’ve picked up from popular culture on you. Even slinky transvestite buskers can get a trifle tetchy at times and have the advantage of possessing longer fingernails with which to scratch your paintwork.

These impromptu street jams often resemble the fun preliminary heats of American Idol; the ones in which tone deaf sociopathic wannabes induce reactions in the three judges akin to somebody dragging their fingernails down a blackboard. Sadly though, a large proportion of the city’s street buskers are just young kids pushed into working the traffic by impoverished parents or callous street gangs. Non-governmental organisations such asYayasan Griya Asih, Sahabat Anak, Jakarta Street Kids Global Concern or the ISCO Foundation generally advise motorists and pedestrians not to give these street children money as it only encourages those who would exploit them to continue to force them onto the streets every day. It seems like an act of minimal charity and kindness to slip these busking wastrels a few coins every now and then, but it’s the ultimate goal is to get these children off the streets and into some full-time education then people would be better advised to divert our busking money into donations to any of the organisations mentioned above.

In this sad context, the lack of enthusiasm in those busking vocal performances is perhaps understandable as many of these children are hungry and often victims of violence and all manner of abuse, and many are threatened if they don’t make a certain amount of money during a given day on the streets. Knocking out a decent tune is probably the last thing on their minds though, as even Jakarta’s public order officials will intimidate and beat up street children, many of whose families can’t even afford birth certificates for them. No birth certificate, no school.

There are over 150,000 street children in Jakarta, busking, laughing, fighting, stealing, shining shoes, getting involved in petty crime, taking drugs and prostituting themselves, and playing some music along the way. The 1989 UN Convention on the rights of the child specifies rights to a home, health care, and an education, however in Jakarta, such things remain a pipedream for many adults, as well as children.

So, in this context, a simple mind numbing slog through the city’s purgatorial traffic jams now becomes a moral dilemma. Flick these buskers Rp.1,000 and hope that they make their daily quota, or sit and suffer as some classic songs are murdered, and instead transfer a few hundred thousand rupiah to a street children’s charity, which will then try and get a small percentage of these kids to hang up their acoustic guitars and go to school.