The Komodo National Park, an area of 1,817 square kilometres made up of three main islands, Komodo, Rinca and Padar, as well as several smaller ones, was earlier this year awarded the prestigious title of one of the New Seven Wonders of Nature. A protected area where one can find prehistoric gigantic lizards, turquoise-blue sea, white (and even pink) sand beaches, untouched islands, a bountiful ocean of fish, coral reef and even dolphins, it’s hard to believe this kind of world still exists. The best way to experience this paradise is on a live-aboard and if you want to be on one where you arrive as friends and leave as family, I suggest you try the Batu Bolong.

Owned by Jon Elliot (an Australian geologist), Pedro Restrepo-Pace (a Colombian geologist) and Danny Beak from Labuanbajo, the Batu Bolong is an understated beauty. Her 23-metre long skeleton was found in Sulawesi, where she was worked on for a number of months to become what she is now; three levels with a top deck for dancing and lounging, along with an open-air sleeping area at the stern of the top deck where eight can sleep on four double beds sans walls, a middle deck where the kitchen cum shaded lounge area can be found, and two double en-suite cabins down below. My advice would be to sleep upstairs as it can get quite stuffy down there, especially when the generator is turned off at around midnight. But this is what makes this boat different to others; you sleep without the sound of a generator nagging in your ear, and instead to the sounds of wilderness whilst docked in a bay where hardly a ripple can be seen on the ocean’s surface. 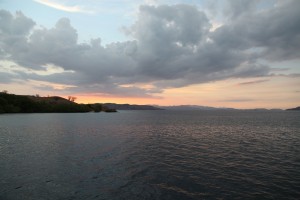 The Batu Bolong is fully equipped for diving trips and will take you to some of the best dive sites in the world. Also onboard was our dive instructor, Adrienne Salcau, who knew these parts like the back of her hand and enthusiastically shared her expertise with us. Adrienne’s pre-dive briefs were thorough and clear, which meant fun and safe dives, and she gently encouraged us to attempt stronger current dives (renowned in these waters) so we could experience the best that diving here has to offer, as well as become more experienced ourselves.

The best site was Castle Rock, which was enjoyed at sunrise to avoid sharing with other divers. We did, however share the surface with dolphins, curiously dipping in and out of the waters around our dinghy as we edged towards the drop site. Entering the water via negative entry, we went straight down to around 25 metres and were immediately hit with a strong current, forcing us to hold on to the rock to avoid being dragged away. This site is special because it’s filled with all things large – white and black tip sharks up to three metres in length, reef sharks, tuna, giant trevally and napoleon wrasse (known to weigh up to 150kg) as well as thousands of other fish on a feeding frenzy. When you park on the bottom of the ocean, holding on and feeling the current blast in your face, you can just watch their world go by as though you were watching a giant aquarium. I would return to Komodo for this site alone. It’s an exhilarating action dive filled to the brim with life. 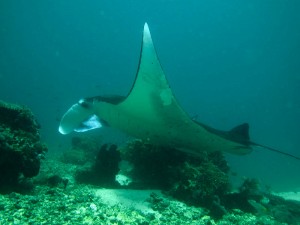 Another major attraction for divers to these parts is the Manta Ray. These gentle giants are the largest of their kind here (three metres long) and we came into contact with at least six at Manta Alley. At a max depth of 15 metres, this alley can be enjoyed by snorkelers as well, although the current can take you quite far on the surface. One manta in particular slowly swooped down and hovered a metre above us to bask in our bubbles and it was such an honour to be able to get close to these beautiful animals that are being poached at an incredible rate off the east coast of Bali and elsewhere. 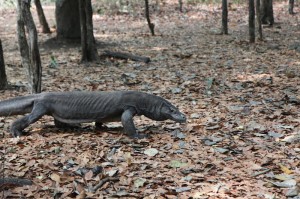 Of course a trip to the Komodo Islands wouldn’t be complete without meeting some of the local inhabitants – the Komodo Dragon. We took a morning trip to Rinca Island’s national park and enjoyed the medium walk, encountering several large mothers guarding their nests, a large male on the prowl, following a water buffalo everywhere it went and almost a dozen lazier dragons dozing below the island’s dapur (kitchen). This park is maintained so well, with not a shred of rubbish seen anywhere and guides speak excellent English, protecting us with effective, albeit primitive large fork sticks. The National Park has seen a significant upsurge in tourism since it was declared a New7Wonder with 40,000 visitors encountered in the first quarter of this year alone.

Life aboard the Batu Bolong is multi-dimensional and caters for the non-divers, as well as children, with escorted snorkelling trips available on a whim. Other activities include short hikes where you can watch stunning sunsets, beach barbeques, and swimming in crystal clear waters of isolated islands. 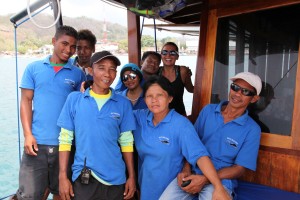 The crew were really top rate; from the moment I got in touch via email until the moment we left, we were looked after. Coordinator, Santy, was a barrel of laughs, welcoming me with open arms, Captain Hassan navigated wearing a pirate’s hat and always had a smile on his face, as did co-owner Danny (also a Dive Master), and Chef Nur cooked delicious healthy food throughout our time onboard. The deckhands were quiet but diligent, and there was even a live-aboard masseuse to knead out those pesky knots. Nothing was too much to ask and we felt 100% relaxed and most importantly, safe.

When asked if there were plans to expand the business, Elliott answered, “We have no intention of expanding. We would like the boat to pay its way, providing on-going employment for our team from Labuanbajo and offering our crew opportunities to develop new skills such as mechanics or dive masters. We also plan to take the boat to other parts of the archipelago in the off-season after this year such as Raja Ampat.”

Getting there:
It’s best to take an evening flight from Jakarta to Bali and stay overnight near the airport.
Morning flights from Bali to Labuanbajo can be organized by the Batu Bolong team.

Must bring:
Plenty of sunscreen and a camera. Clothes optional.