The civilisation of Java boasts of intricately artistic traditional architecture that stands the test of time. But people often forget that Java is not only home to the Javanese and the Sundanese. One of these lesser-known ethnic groups is the Osing of Banyuwangi.

After a temple-hopping journey across Java, I ended up in Banyuwangi—my final stop at the eastern end of Java before crossing the narrow strait to Bali. Naturally, one of the first things I asked locals about when I arrived was the architecture. After learning that the so-called “Desa Wisata Osing” I had been so excited to visit was neither a desa (village), nor a place for wisata (touristic attraction), nor did it display anything particularly Osing, the hotel manager told me to knock on a stranger’s door a few blocks away.

I ended up in Sanggar Genjah Arum, a 4,000-square metre property that flaunted century-old al fresco Osing houses in the middle of a lush garden. Soft bamboo angklung music played from the top of a tall bamboo tower by the entrance, from which a 360° view of the surrounding rice fields, coffee plantations and village is visible.

The property owner, Setiawan “Iwan” Subekti, has been collecting Osing houses since 1997, to save them from being sold to Balinese craftsmen who would take them apart and recycle them into luxury furniture for the export market.

Iwan is a coffee plantation owner and an internationally-reputed coffee taster, so he constantly welcomes coffee aficionados in his home. One of the striking features of the property is a stylish coffee bar adorned with traditional Osing ornaments like the gandrung and the barong.

“These houses are made from benda wood and are three to five generations old,” explained Iwan. Benda (Artocarpus elasticus), also known as terap or Brazilian rubber, is native to the western half of Indonesia, Malaysia, and Singapore. Banyuwangi used to be benda woodlands. Benda wood can stay intact more than 100 years, grow up to 45 metres in the ideal wild (or typically up to nine metres in Java), does not easily break or bend, and naturally repels termites. Timbre used for building houses are traditionally harvested a year in advance by slitting the tree trunk for sap and letting it bleed slowly to death. This process makes the wood exceptionally robust. 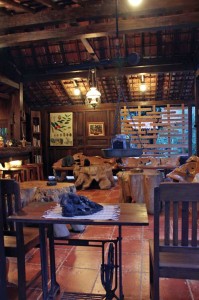 The Osing house consists of the benda frame, which can conveniently be dismantled, transported, and reassembled. The pillars are secured to a foundation in the ground, and support a lattice frame for the clay tile roof. No nails are used for securing, only pegs. And yet the construction is curiously strong—Iwan keeps a miniature model of the house frame, which is strong enough to support the weight of an adult who climbs on top.

Typically the house is divided into three sections: the porch, the bedroom, and the kitchen. The porch usually serves as an al fresco living room where guests are entertained and community discussions take place. The bedroom is traditionally enclosed in walls of woven bamboo called gedhék pipil. They do not need windows because the wall’s warps and wefts allow air to permeate for sufficient ventilation. Alternatively, Iwan also modifies some of his houses with ornately decorated wooden walls.

With origins traceable to the Majapahit era, Osing architecture and design seamlessly blends Javanese, Balinese, Chinese, Islamic, Hindu-Buddhist and pagan elements into a vibrant but graceful look. Timbul, an elder from Kemiren, explained that the Osing house and its ornaments are loaded with Osing philosophy of marriage and family.

“There are several kinds of Osing houses: the double-roofed cerocogan, the triple-roofed baresan, and the quadruple-roofed tikelbalung. The cerocogan is usually built for young men and women in their late teens. Back then, tertiary education wasn’t very common among the Osing, so young men and women would fall in love and get married,” said Timbul.

“The baresan symbolises conflict and temptations after marriage. Happiness isn’t automatic in a marriage because the spouses have to work it out and resolve to get through whatever trials come their way. And if they make it, they have children, and later grandchildren, which make their home complete. That is what the tikelbalung is all about,” continued the elder.

The Osing are descendants of the citizens of Blambangan, a 13th-18th century Hindu kingdom that outlasted the great Majapahit Empire and long resisted the Dutch East India Company. During this era, the spread of Islam and the battle for colonial and local royal powers in Java drove the Hindus to migrate east to Bali, thus making Blambangan (now Banyuwangi) a buffer zone.

According to Timbul, when the Dutch invaded in the 18th century to purge Blambangan from the Hindu Balinese, the Nusantara ethnic groups conspired to protect each other. The Dutch would interrogate their targets before attacking to check if they were Balinese, to which the target would reply “O sing… sing ngelawan.” (“Oh, no… I am not fighting against you.”)

The Dutch let go of each person who answered this and assumed that they belong to a previously unknown tribe called the “Osing”—where in fact these people could be Javanese, Balinese, Madurese, or anything else. The “Osing” has since been identified as one people, mostly converted to Islam, and speak a distinct language related to both Javanese and Balinese.

Perhaps it is because of this deliberate resolve to unite that harmony becomes a crucial concept in the Osing home. A rooftop slanting downward symbolises humility and courtesy in Osing society. Bamboo or wooden walls symbolise modesty and simplicity. The semanggi (clover) ornament symbolises peace and happiness in a well-fed household. The selimpetan (sunflower with swastika) symbolises the unending love of a man and a woman. The kawung symbolises faithfulness and contentment in one spouse for life. And the sun symbolises bright hopes, warmth, and joy in the household.

Other things to enjoy in Iwan’s home include sights of the neighbours ploughing the rice fields with a pair of Balinese cattle, demonstrations of plantain fibre fabric weaving, Iwan’s vintage collection of coffee roasting and brewing equipment, and of course tasting rare blends of Iwan’s coffees and teas while listening to his collection of jazz records. If you’re lucky, you might also be in the company of Iwan’s other friends, many of whom are Banyuwangi-based artists who are happy to share a local perspective on their history and culture.