Galungan: Biggest Day of the Year

Celebrating the creation of the world by the supreme god and the victory of goodness or virtue (dharma) over evil (adharma), the Balinese religious festival of Galungan is the most important regularly held holiday on Bali. Like Christmas in the West, but without the tawdry commercialism, Galungan is a day of prayers and feasting when schools are closed and commerce comes to a standstill.

Observed in the 11th week of the 210-day uku year by Balinese all over Indonesia, Galungan is the start of a 42-day holy period. The celebration has its origins in an ancient pre-Hindu harvest festival and it’s forbidden to begin planting during this period. In Bali-Hindu legend, Galungan commemorates the defeat of the legendary demon-king Mayadanawa, represented by the god Indra.

In our house you know Galungan is coming because of a sudden and obvious uptick of activity. Preparations begin at least seven days in advance when we start gathering materials for offerings and preparing the penjor pole. Our housemaid brings offerings to the cemetery for the uncremated dead of her desa (village) and we ask for spiritual strength in confronting life’s trying cycles and suffering. 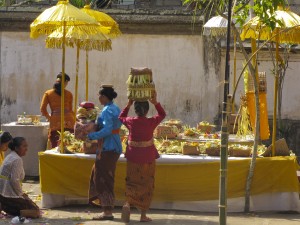 The pace quickens closer to the day with the whole household working soon after the sun breaks over Gunung Agung until the last light of day fades on top of Gunung Batur to the north. Three days prior to Galungan, the preparations are non-stop with building altars, fashioning offerings, cutting decorative patterns from palm leaves, preparing sweet rice snacks and erecting ceremonial paraphernalia. In villages on either side of the ridge where we live, I can hear the high-pitched squeals of pigs piercing the mid-morning air as they are being slaughtered to make lawar.

On Galungan day, starting at dawn, the women of our household dress in their finest kebaya (traditional blouse) and gold jewellery. Later in the morning, they bear elaborate offerings to the village temple of origin where ancestral spirits and deities descend to earth to be honoured.

The Balinese seem the happiest when they are getting ready for a festival. The idea is to fulfil your religious obligations and have a good time while you’re at it. The work actually starts a few weeks before Galungan, with a day of offerings for

Batara Guru, a Hindu god from the creation myth. This holy day of Pagerwesi assures protection of the family, the village and the world at large. Pagerwesi means ‘iron fence’, symbolizing the fortification around you to keep out greed and evil during the ceaseless battle between the two faces of god.

Large celebrations such as Galungan, lasting for more than a week and mobilizing hundreds of people in every village and household (rumah tangga), are performed with startling efficiency. Nobody is left out. In our village in an agricultural district of Tabanan, farmers as well as rich businessmen from Denpasar take part in the preparations. A sure fire way of pleasing the gods is to present them with prayers and offerings, so major festivals such as Galungan are brightened by rows of sumptuous fruit and flowers. Rules govern exactly how much food, oil, palm leaf strips, lamak and symbolic money are offered.

This is a gay and festive time when all of Bali’s roads, large and small, are draped with penjor. Like a maypole taken to the extreme, these tall, curved bamboo poles are adorned with unhusked rice and flowers. Placed in front of each door as a symbol of thanks to Sanghyang Widhi for his gifts of life and prosperity, they dip toward the centre of the street. The sight of long lines of penjor gracing Balinese villages alone is worth a trip to Bali. 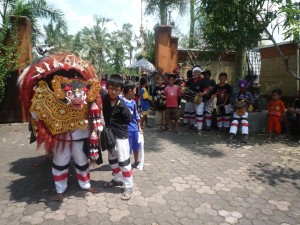 Another way to entertain the gods is with dance, drama and gamelan music. Laughter brings joy to the gods, so each household makes a contribution to the musicians. Both the higher deities and the gods of the underworld are taken into account, one reason why Balinese festivals are so noisy, colourful and confusing. Be patient, as nothing happens to a fixed schedule. The response to my inquiries as to when a procession or event will take place is always “Sebentar lagi” (in a little while).

Fashionable dress shows respect and is also a mark of social prestige. Women don rich handspun kain and ornament themselves with jewels, scarves and pounded gold in their hair. At festival times a young woman looks her best. She’s allowed to wear lipstick and makeup at religious events, but not in daily life when it would be considered too flirtatious. Infant girls wear flowers in their hair and bright sashes around their tiny waists. Men wear a keris, brocaded head cloth and colourful sarung.

A large temple festival is like a stage for a lavish form of metaphysical theatre, a three-ringed circus of the arts when the temple comes alive with devotees who crowd into the courtyard and parade between the shrines. Babes are carried in the arms of small children, priests recite mantras, elders translate poetry from sacred lontar, children fly kites and men gather to joke and gamble with brightly coloured Chinese cards or fight their cocks.

Clove cigarettes and incense smoke choke the air, peanuts and rice cakes are sold, and there is spirited gossiping among neighbours and friends. For three or four days almost without break, ritual dances, festive music and dramas are performed as if the occasion were a gay costume party instead of a fervid act of worship. Finally, on the day after Galungan, called Manis Galungan (Sweet Galungan), there are great family reunions and visits to friends and neighbours. Bloated with sensory pleasure, the many ritual obligations are brought to a close and the gods are invited to return to their heavenly spheres.