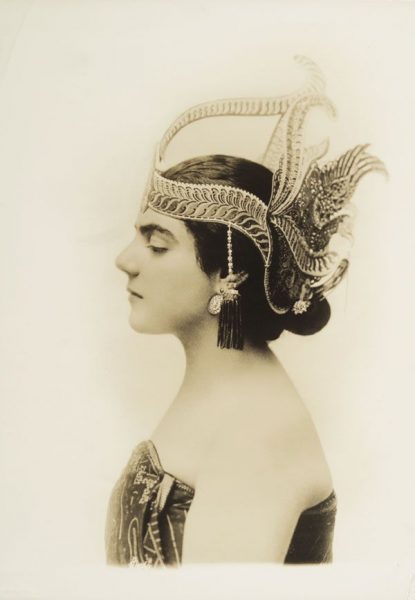 Gauthier in a Javanese headdress

Previously I wrote about the arrival of jazz in Batavia in 1919. What was heard until the invasion of the Japanese in 1942 varied little from the sounds of imported 78 rpm platen and from transcriptions of sheet music. However, what is little known in Indonesia is how a Canadian interpreter of Javanese ‘traditional’ music came to be an influence on jazz itself.

Éva Gauthier (1885-1958), a Canadian mezzo-soprano, was to be the catalyst. In a diva hissy fit, she gave up on singing high opera after she was replaced at the last minute by another singer in a 1910 Covent Garden (London) production of the Delibes opera Lakmé. She promptly left for Java to join her fiancé Frans Knoote, a Dutchman who was then managing a tea plantation outside Bandung.

Within weeks of arriving, she was performing concerts of arias by Tchaikovsky and Rossini in Batavia’s Schouwburg Weltevreden (Gedung Kesenian Jakarta) accompanied by a local pianist and the house band.

In the months that followed, Gauthier toured Java, playing all the major concert halls and sociëteiten (European social clubs). Sponsorship from the Robinson Piano Company, a firm specializing in pianos built for the tropics, underwrote a tour in 1911 to Kuala Lumpur, Penang, Singapore, Hong Kong, Shanghai, Tianjin, and Peking; tours to Japan, Siam, and India followed over the next two years.

Knoote then got a job with a Semarang commercial firm and it was while living there that Gauthier discovered gamelan music.

“From there I went to the other cities of the island. Often on the roads, I would see groups of natives playing queer instruments, and hear them singing songs of many peculiar harmonies. I immediately became curious. Here was a music of which I had never heard! I, who had made music my life study! I inquired about these strange melodies. All my friends shook their heads, and said it would be impossible for me to understand the native music, no white people did, and as for singing it—!”

The man who provided entrance into the world of Indonesian music for the vocalist was the Dutch composer and pianist Paul J. Seelig (1876-1945), who had sat in as Gautier’s pianist when her local pianist failed to turn up. Brought up in Bandung, he had studied composition, conducting, and piano in Germany. In 1900, Paku Buwana X, the susuhunan (Sultan from 1893 to 1939) of the royal court of Surakarta (Solo), appointed Seelig as the conductor of the royal band, a position he held until 1908.

During this time, Seelig documented the royal gamelan ensemble repertoire in Western notation. He also collected Malay songs from the repertoires of kroncong and stambul, a form of trans-ethnic Indonesian folk theatre, adapting them for voice and piano in a music style influenced by Debussy. Seelig provided Gauthier with a number of these song arrangements and she liked them enough to commission some more.

With the outbreak of the Great War (1914-18) in Europe, Gauthier decided to travel back to North America, arriving in New York City in September 1915.

She struggled to find a niche in the already crowded New York music scene, so she wisely chose to concentrate on ‘exotic’ Javanese songs and the modernist Western vocal repertoire.

With the Boston-born exotic dancer Regina Jones Woody (1894-1983), who danced under the name Nila Devi, she created a 15-minute act titled ‘Songmotion’ in which Woody illustrated Gauthier’s Indonesian songs in dance. At the end of October 1915 they left New York for a year-long tour of the main American vaudeville theatres.

However, the grueling schedule of matinees and evening performances and the lack of artistic appreciation from audiences, who were otherwise entertained with trick cyclists, comedians, singers and jugglers, lead to Guathier withdrawing from the tour after five months.

New York was already home to many North American and European musical performers, so Gauthier focused on her Javanese songs, which she combined with her knowledge and skill in modernist western singing. She began a series of annual recitals at Manhattan’s Aeolian Hall, and on November 1, 1917 her performance caught the eye of many leading composers. Known as a “sensitive purveyor of interesting, untried songs“, she gave renditions of three songs by Maurice Ravel. Her performance included the American premieres of Stravinsky’s Three Japanese Lyrics and Griffes’ Five Poems of Ancient China and Japan. The performance was a great success, and she began to receive invitations to perform premieres of songs by other contemporary composers.

Gauthier travelled to Paris in 1920 at the behest of the Music League of America to arrange a tour of North America by Maurice Ravel. She struck up a friendship and professional correspondence not only with him, but also with Erik Satie. This led to more music being sent to her by various composers that she would premiere in concert.

The key concert in this narrative was in 1923. The first half consisted of classical works by Vincenzo Bellini and Henry Purcell, and modernist works by Arnold Schoenberg, Darius Milhaud, Béla Bartók, and Paul Hindemith. The second half of her performance would upset the musical establishment, however. She opened with Alexander’s Ragtime Band by Irving Berlin, then performed works by Jerome Kern and Walter Donaldson, and finally finished with three works by George Gershwin, the first time his works (I’ll Build a Stairway to Paradise, Innocent Ingénue Baby, and Swanee) would be performed by a classical singer in a concert.

Important figures in the audience included Paul Whiteman, who then commissioned Gershwin to write a composition for his orchestra. Rhapsody in Blue was the result, and it was premiered in 1924 at the Aeolian Hall by Paul Whitman’s Orchestra with Gershwin at the piano, as he had been the previous year for Èva Gauthier.

Èva Gauthier was a pioneer and perhaps the first ‘world music’ singer. She did much to acquaint North Americans with the native culture of what was then the Dutch East Indies. Perhaps her most important contribution was to take jazz on to the concert stage thus gaining widespread public acceptance for this most creative of music genres.

There are some 30+ Gauthier recordings on the internet.

From Bauble to Lace, Make a Statement this Party Season

The People Behind the Goods