I was a kretek (clove cigarette) smoker for almost two years. When I first started smoking clove cigarettes in Kalimantan during a voluntary placement, I remember an older volunteer warned me, “Be careful with those things, they can be too nice.”

Smiling, I foolishly said, “Don’t worry, I’ve never been addicted to cigarettes, I’m just a social smoker.” In truth, I had deceived myself – the kretek’s cloves were so aromatic and they aligned perfectly with coffee – I forgot that I was smoking tobacco. Soon I was chain-smoking at social gatherings. One morning after seeing a pyramid of empty cigarette packets, it dawned on me that I was an addict and miserably I matted down my knotty hair and slouched to a nearby toko to sooth my throbbing head. Later I turned into a troll – I’d groan if I didn’t get my kretek and coffee fix. After an evening of socialising with friends, sometimes I would hide a kretek in an old shoe so that there would always be one to ease me in the morning. Sometimes my husband or a friend would bloody find it.

It is precisely because the cloves are so ‘nice’ – marinating, even hiding the taste of tobacco – that I became hooked. Obviously I don’t want to upset the kretek community, but at the very least I can tell you a bit about kreteks, the kretek culture and just how and why kreteks can be dangerously nice.

The onomatopoeic word ‘kretek’, is derived from the crackling sound that the cloves make as they pop and burn with each inhalation. They were first invented by Jamahri of Kudus in Central Java in 1880. An asthma sufferer, Jamahri first rubbed clove oil on his chest (the oil can be toxic if consumed); however he later discovered that when cloves were inhaled with tobacco he could breathe more easily. It is the compound eugenol in the cloves that give kreteks their distinctive aroma – eugenol is an antiseptic and anaesthetic which numbs the throat. Despite their origins however, kreteks are not a healthy alternative and studies have shown that the health effects are similar to conventional cigarettes (although some kreteks contain more nicotine and tar).

Yet health warnings aside, the kretek industry does provide an income to clove farmers as well as factory workers since the majority of kreteks are hand-rolled. The debate now thickens. Not only do kreteks provide employment to many Indonesians, but they are also considered to be a cultural icon. Ngudut dan ngopi is the Javanese ‘art’ of smoking whilst drinking coffee. The tradition of decorating kreteks with ground coffee and milk, known as nyethe, is popular in East Java and batik patterns are painted on with toothpicks or spoons. 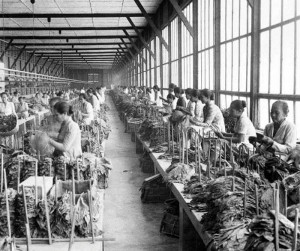 Amongst the kretek communities, a popular anecdote goes as follows; in 1953, at the coronation of Queen Elizabeth II, Indonesian diplomat K.H. Agus Salim, upon observing an awkward-looking Duke of Edinburgh (who was young and probably nervous), approached him, lit a kretek and asked him if he recognized the smell. After the Prince had admitted that he did not recognize the scent, Agus said to him with his characteristic satire, “This is the reason why 300 or 400 years ago, your people sailed the seas and colonized our country.”

This year the film Mereka yang Melampaui Waktu (Those who Surpass Time) directed by Darwin Nugraha was released and the book of the same name was written by Sigit Budhi Setiawan. Darwin wanted to counter the anti-smoking campaigns by documenting elderly Indonesian smokers who were still healthy. For the project, older smokers and coffee addicts across Java, Bali and Lombok were interviewed; some were famers who smoked and still ploughed and harvested tobacco despite their age. Perhaps it could be argued, however, that the traditional, countryside lifestyle of the subjects had some positive health benefits (for example the rigorous exercise of farming), which helped to negate the harm of cigarettes and their bodies were not subjected to the stresses of modern-day city living and pollution.

Some consider flavoured cigarettes including kreteks to be a ‘gateway’ into smoking and many cigarette and kretek companies deliberately target the youth; in Indonesia, kretek companies organize university sponsorships as well as nightclub and music events. According to studies, children and young people are particularly receptive to marketing strategies, so this is a concern.

Perhaps, from a balanced perspective it might be wise to say that it is never good to be addicted to anything, whether it’s chocolate, the Internet, “crackberry” or tobacco. Ideally all sweet things should be taken in moderation, although I was not a good example of this. 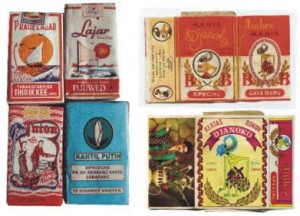 I did not possess the relaxed traits of Javanese ngudut smokers. My guilt negated any so-called sensual pleasure. I remember watching Bill Hicks chain-smoking and thinking, “Flip, that’s going to be me in one year or so,” and in a panic I lit up a cigarette. After ten years of kretek smoking, my husband agreed we had to give up and using sweets as replacements, we soon discovered that all traces of willpower had been smoked away. Irritable, we even had a public argument at a Mexican restaurant in Kemang – I felt ugly and fat and I probably was after all the replacement sweets I was eating. Like a stroppy teenager with a headache, I stubbornly sat in silence and my husband threw his chewing gum against the ceiling in protest. Embarrassed, I slinked out of the restaurant, seething with self-hatred and despair.

In the end we found a copy of Allen Carr’s Easy Way to Quit Smoking and we both quit on the same day after reading the book. We’ve been off cigarettes now for 14 months without relapse and I feel free and happy. Sure, I put on weight and was called gemuk (chubby) by friends and people I didn’t really know and instead of congratulating me, some friends even teased me into smoking again, but for anyone who wants to give up or who has given up, let me say it: congratulations.