Nestled in the Brantas River Valley, the cradle of the Hindu-Buddhist Majapahit Kingdom of the 13th to 16th centuries – and arguably Java’s greatest ancient civilization – there are a number of cottage industries that provide fascinating detours when visiting the kingdom’s temples and museum. A popular tourist site is Trowulan, southwest of Surabaya between Mojokerto and Jombang.

The Brantas River in East Java is what the Nile is to Egypt, an important trade and communication route and site of human activity for millennia. It is not surprising, therefore, to find crafts and ancient skills here, some of which are at least as ancient as the temples themselves. 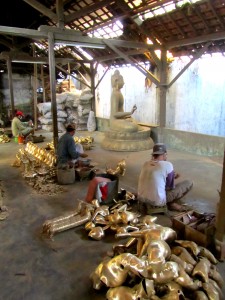 Driving along the main east-west road through Trowulan, the 13th century capital of the Majapahit Kingdom, we notice that many of the village houses have their frontages festooned with stone statues for sale. These are newly carved, but the images depict religious figures predating Islam’s establishment on the island: Hindu deities – Shiva, Visnu, Laksmi, Ganesha – Buddha in familiar serene poses, as well as characters from the Mahabharata and Ramayana epics. The volcanic stone and granite used is sourced in Central Java in the region where it has been quarried since at least the 8th century, providing the building material for the ancient temples of Borobudur and Prambanan.

Exploring the kampung on either side of the main road, a number of well-established businesses can be seen carrying out this skilled craft. One in particular fills shipping containers with carved figures for export to Europe, North America and Australasia, as well as trucks supplying domestic clients. Locals provide the labour and skill under the tutelage of a master carver. Meteorite-like boulders are delivered by pickup truck from Central Java, and on delivery, are broken into smaller portions sufficient for carving miniature or larger figures, depending on what is required, by hammering enormous iron pegs into the rock. This back-breaking work is a skill in itself, as a miscalculation can fragment the rock into unusable, smaller pieces.

It seems that the artisans know just how the cookie crumbles. A rough approximation of the intended subject is chiselled out first, and then slowly, using crude equipment, a recognizable figure starts to take form. The finest work is done in stone of a pink or white hue, with the less expensive pieces carved in igneous granite, which has a darker, slightly pitted surface. As the figure becomes gradually more refined, a grinder is used until sandpaper delivers a perfectly smooth texture. What strikes the visitor is how easy it would be in less well-trained hands to go just a little too far with the chisel and take off a nose or a finger. To achieve such a fine level of detail from such a crude beginning is truly remarkable.

In the village of Mojoagung, about 20 minutes on the road westwards to Jombang, lost wax bronze casting is practiced in the yards of a number of kampung houses. This method of casting sculptures is known to have been practiced in Java at least since 300 BC. Exhibits in the museum show us that the Majapahit Kingdom was a sophisticated society with a class of skilled artisans producing religious statuary, as well as figurines and ornaments for the upper classes. It is perfectly conceivable that there has been an unbroken tradition of bronze casting in this area at least since this time.

At one particularly well-established cottage foundry, a gallery displays a large range of copies of museum pieces depicting traditional Hindu-Buddhist figures, as well as Majapahit era door knobs and handles, contemporary dancing frogs, luxuriating cats, any shape that can be cast in bronze. Bronze can be aged with acids to be indistinguishable from museum exhibits, or be finished to a dull or polished patina. Behind their gallery is a ramshackle series of sheds where the different stages of the process are carried out. First, we see that a customer’s existing sculpture or a design is sculpted in solid wax. Then, hollow molds are made in wax from the ‘original’. A clay mixture is shaped around this, and later fired in a kiln in another of the sheds. The setup looks primitive, but we are reminded that this is an ancient craft that was never dependent on elaborate equipment.

The master bronze-maker shows us that after firing the clay, the wax inside has melted away. At a primitive-looking cauldron, a long handled ladle is dipped into a molten ‘bronze’ alloy of copper, tin and other recycled metals, and then poured into the cavity of the clay mold where the wax once was. It is left to harden and cool. Several workers have the task of carefully hammering open the fired clay to reveal the bronze inside. A team of finishers can be seen chasing the metal with grinders and fine abrasive paper, and the occasional soldering over of imperfections in the surface. Depending on the customer’s requirements, shoe polish is one of the agents frequently used to provide a beautiful patina. It is impossible not to be impressed and in awe of the whole operation.

It was in the 1970s that manik-manik (flower beads) were first made in the hamlet of Gambang near Gudo, off the main road to Kediri. Beads are part of Indonesian culture; the traditional Dayaks of Kalimantan still wear them, as do tribes from parts of Indonesia’s eastern islands, and decorative beads exhibited in the museum date to the Majapahit era.

Made from broken glass bought up from factories, or collected piecemeal, this is combined with a colouring agent and melted into a large ball about the size of a grapefruit. This is then drawn off with a metal pick into long, very thin rods over a blowtorch at a temperature in the thousands of degrees centigrade. Another operator turns these rods over a smaller gas flame torch onto a thin wire that is kaolin-coated to prevent the beads sticking to it. The way the craftsmen manage to turn out perfect spheres by slowly twirling the rod over the flame is fascinating to watch. Using different coloured individual ‘seed beads’ that are also melted in long, thin rods before use, each necklace bead is then decorated by hand, swirling or dotting the melting coloured glass over the surface. At one of the best established cottage industries, the proprietor has been inspired to create replicas of beads found in other cultures beyond Indonesia. His showroom displays hundreds of different designs ready strung as necklaces, bracelets, broaches and earrings, as well as beads available individually.

Fly into Surabaya (several domestic and international airlines connect here), and take a car to Trowulan in the Mojokerto regency, and then onto the villages below in the Jombang regency.

Why Everyone Should Visit Lombok